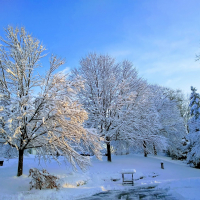 hcpatel78 Member Posts: 148
February 2020 in Radiant Heating
Hello Everyone...I have been reading this blog for all information and be a great source of information here shared by industry professionals. I am a mechanical engineer who has decent hands-on experience with plumbing and understanding of the HVAC system. HVAC is not my primary field for my profession.....so I would like to take advice and learn from HVAC professionals for my little DIY project. I would appreciate of all your help and please correct me if I am doing something wrong with my lack of understanding and knowledge. I have been studying lots of articles, Technical books on HVAC rad design (JOHN S) and watch a series of videos by caleffi and some reputable companies to gather all information. Also, acquire a complex design manual from the UPONOR and study the whole manual.

I wanted to install (Supplemental Heat) radiant underfloor between the joist system. I Lived in Northern NJ (07828 ZIP) and keep design Delta T 70. We have a central air furnace for the house (60000BTU) for primary heating. House is built in 2007 with a 2x4 stud wall. Has R60 insulation on the attic and insulated basement walls with hybrid(2"Foam sheet R10 + R30 Roxul) walls. The basement is 30'x30' with the access of joist with 8' of ceiling ht. It's colonial two-story house. The radiant heat will be for the first floor which has 3/4" OAK hardwood installed on 23/32" thick plywood. I used a watts radiant software for my detail heat loss calculations, which came to 33000 BTUH for 70 delta T.
I have bought Noritz CB199-DV combi boiler for the heating source, it has 120K BTU heating capacity output. I have another tankless for DHW so I am going to use this new COMBI for only floor heating application.
I have put some basic diagrams together. Before I start to work on my setup, I would like professional feedback and OK for my design. Also, this is partially taken from the installation manual of Noritz combi boiler.
Please see the attached picture. Also please suggest any missing component in my design to make this as efficient & pleasing as possible
Radiant Heat Diagram.pdf 808.4K
Thank you,
Hiren Patel
0
«123»