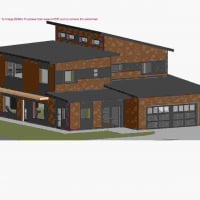 Thanks for all the help from many of you back in Feb when I was designing my radiant ceiling panels. I tried to pay forward with others posts where I was able.

I could now use some advice on equipment selection for DHW production.

For a quick recap, my ultra insulated and air tight 5000 sqft conditioned space home has a heating and cooling load below 20K Btu. We will be running 85ºF heating and 667ºF cooling supply water to radiant ceiling panels. www.theenclosure.ca for more details if interested.

The space conditioning loads will be serviced by an air source to water heat pump. I am currently looking at units from ThermAtlantic and Nordic.

I now need to figure out how to heat the DHW and am finding this has become more of a challenge than the space conditioning system.

My building design, and already completed exterior envelope, do not allow for any new unplanned penetrations. I currently only have sleeves poured into the foundation to accept refrigerant lines from the outside heat pump(s).

The dwelling is not serviced by gas and more importantly it would be impossible at this point to install flue exhaust ducting for a gas HWT or ducting needed for a Hybrid HWT (to prevent it from over cooling the interior space).

While we could do 100% resistance HWT, this would have a very high operating cost as we do not have time of day discounts. We do not get enough sun for Solar Thermal system (think weeks without sun during winter and early spring).

The Nordic ATW-45 heat pump could potentially also create DHW by using their desuperheater stream, but this would be pushing the equipment, would require three tanks (including space conditioning buffer tank, a preconditioning and final DHW tank), and during the shoulder spring and fall months, the heat pump would ONLY be running to create DHW, in which case we are not sure it could run long enough to allow the final tank to come up to the required 140ºF (preconditioning tank would potentially reach cut-off before final would reach 140ºF)

The ThermAtlantic DX2S-2 would have no means of directly contributing to the DHW production.

I looked at Hybrid HWT's, but as above, do not have ability to duct them to exterior and I do not have a non-conditioned space I could place them into. They would cool my conditioned spaces too much (up to 10ºF). They are also noisy, and my mechanical room is in basement where future owners will probably create a rental suite. So, I believe this option is off the table.

I looked at the Sanden CO2 unit, but it has pretty bad user reviews for first hour output, is $5K, and because of CO2 refrigerant, difficult to service.

Nordic have a small water to water heat pump (WD-16), also $5K, that could use the space conditioning buffer tank as its water source and would heat up the water in a 100% resistance HWT (which could be used as backup) . During the summer when in chilled water mode, it would cool the space conditioning buffer tank even further, increasing the efficiency of the main heat pump. In the winter, it Would increase the load, but again may make system more efficient by running for longer periods but at least would be increasing the load on a fairly efficient heat plant (compared to gas or resistance DHW heating).

Appreciate any direction any of you can provide!