panick007 Member Posts: 14
October 31 in Strictly Steam
Hey everyone. This is my first post but I've been poking around here for a very long time.
I purchased my current home 20 years ago and it was my first experience with both oil and steam heat. At some point I stumbled on Dan's "We Got Steam Heat" and I started to gain a minor understanding of what I was dealing with. The heat in the house worked and I learned enough to keep it going.

In 2008 I decided to pull the 1000 gallon oil tank out of the ground because several homes in the neighborhood had experienced leaks, which resulted in very costly soil remediation. Luckily mine had not leaked, but as I priced new above-ground storage tanks and I compared heating oil prices to natural gas, I opted to spend the money on a new NG boiler. My steam knowledge at the time was just enough to make me think I knew what was what, and I hired a family run company that had been doing it for decades and was in their 3rd generation, so I believed they knew what they were doing.

My new boiler worked similarly to the old boiler but MUCH quieter, and I was pleased. As time passed and I grew tired of banging pipes and gurgling, I grew curious and started looking for answers, which brought me to Heating Help and The Wall. Here I learned about radiator and pipe pitches and vents, and I made little tweaks and changes that had varying minor effects.

Then I saw Dan's video on the importance of near boiler piping, and I learned that my boiler header wasn't "arranged" properly. Then, after reading a post here that said I should look at my installation manual, I realized that the header was smaller than the boiler manufacturer called for (2" vs 2-1/2"). Now I knew I needed to rebuild the header so back to The Wall where I tried to learn to "think like steam" and gain some understanding of what is occurring in that near-boiler piping. Of course that brought me to the subject of drop headers.

Last heating season one of my mains started to leak at the basement ceiling above the boiler so I decided the time to act was before the next heating season began. Last week I installed my new drop header using all the info I could gather here. I know it's a bit messy, that blue goo is hard to keep neat (for me at least). Hopefully I did it correctly. I know you all will point out where I may have gone wrong or could have done better.

Since finishing I am actually quite amazed by the difference in the system. It is nearly silent except for an occasional creak from metal expansion, and the heat seems much more even. I do have a curious issue however that I can't explain. Now the water is disappearing from the boiler much too fast. Previously I would add water about once a week, now it's once a day and it's not that cold so the boiler isn't even coming on very often.

My first thought was that maybe I had a leak inside the boiler above the water line that was sending steam up the chimney, But I flooded the boiler up into the header and no water dripped down into the burner chamber (or anywhere else thankfully). My wet returns are above the floor and there is no water on the floor anywhere. I can't see any leaks on any pipes or radiators. Can anyone offer a clue as to what might be going on.

My pressure gauge barely moves, or maybe it doesn't move at all.

Only one of my mains is vented. It looks to me like the vent was added at some point after the original install. It is a single Gorton #1 tapped into the elbow that drops the main down into the return, after the last radiator take-off. 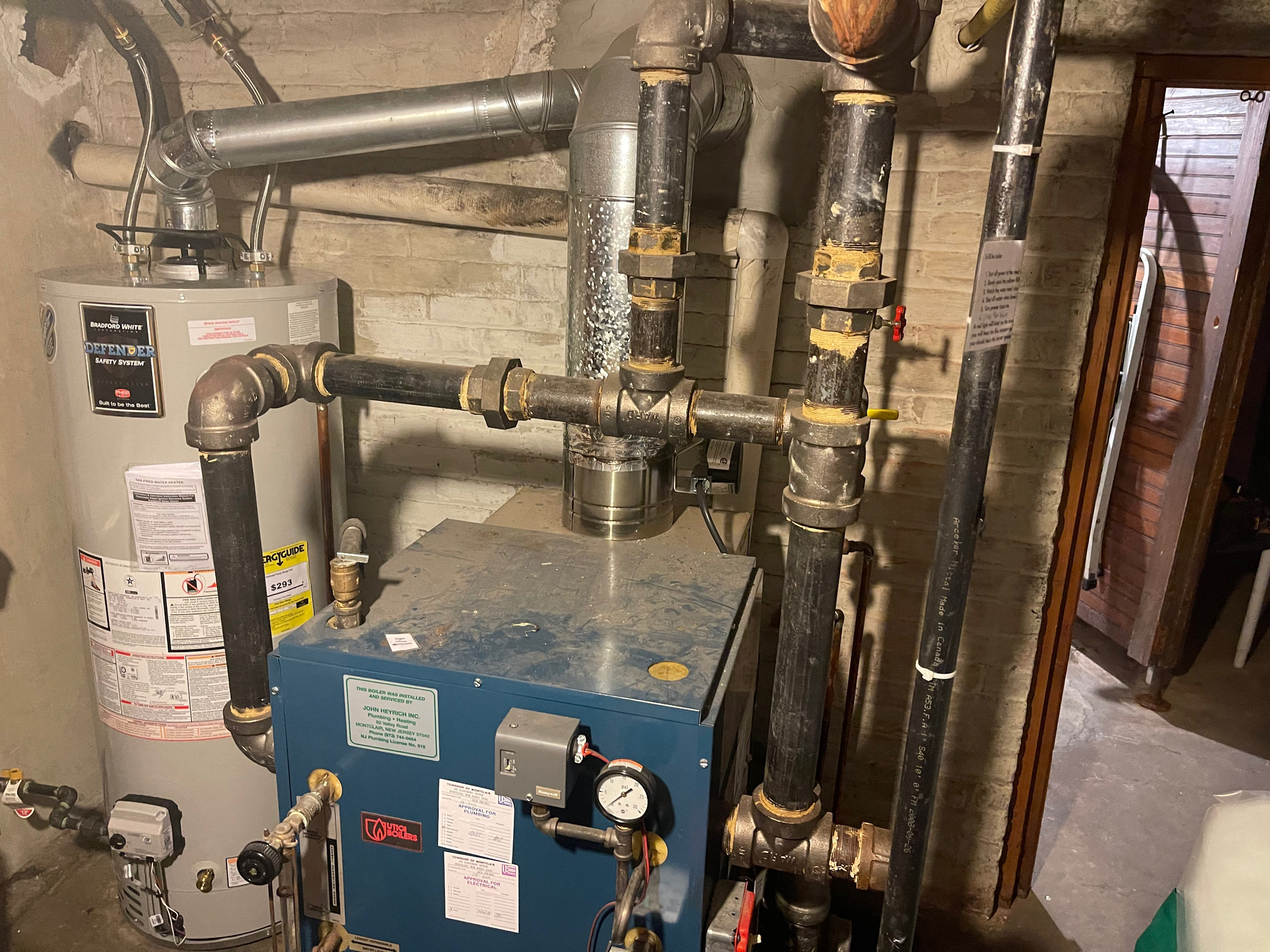 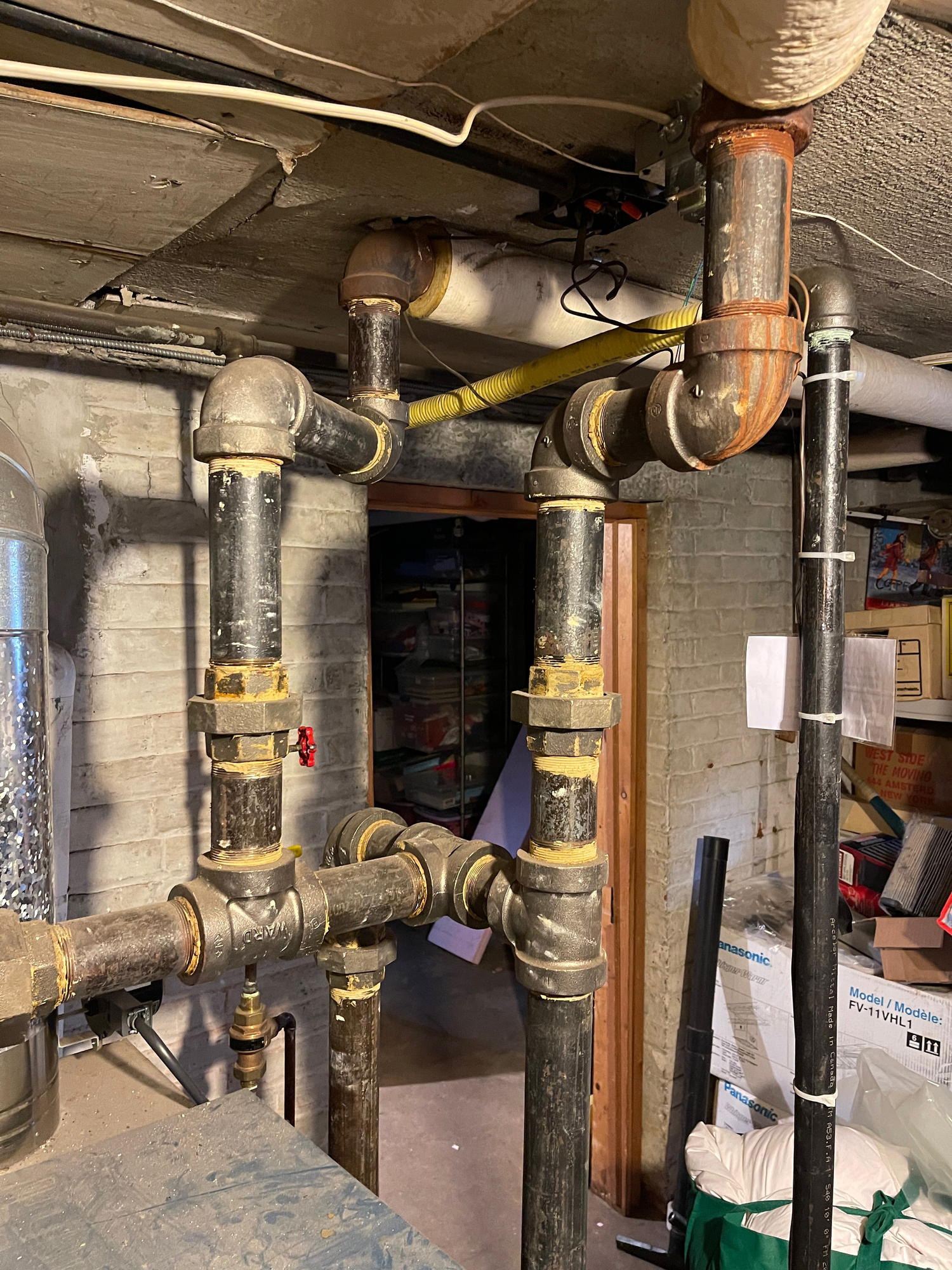 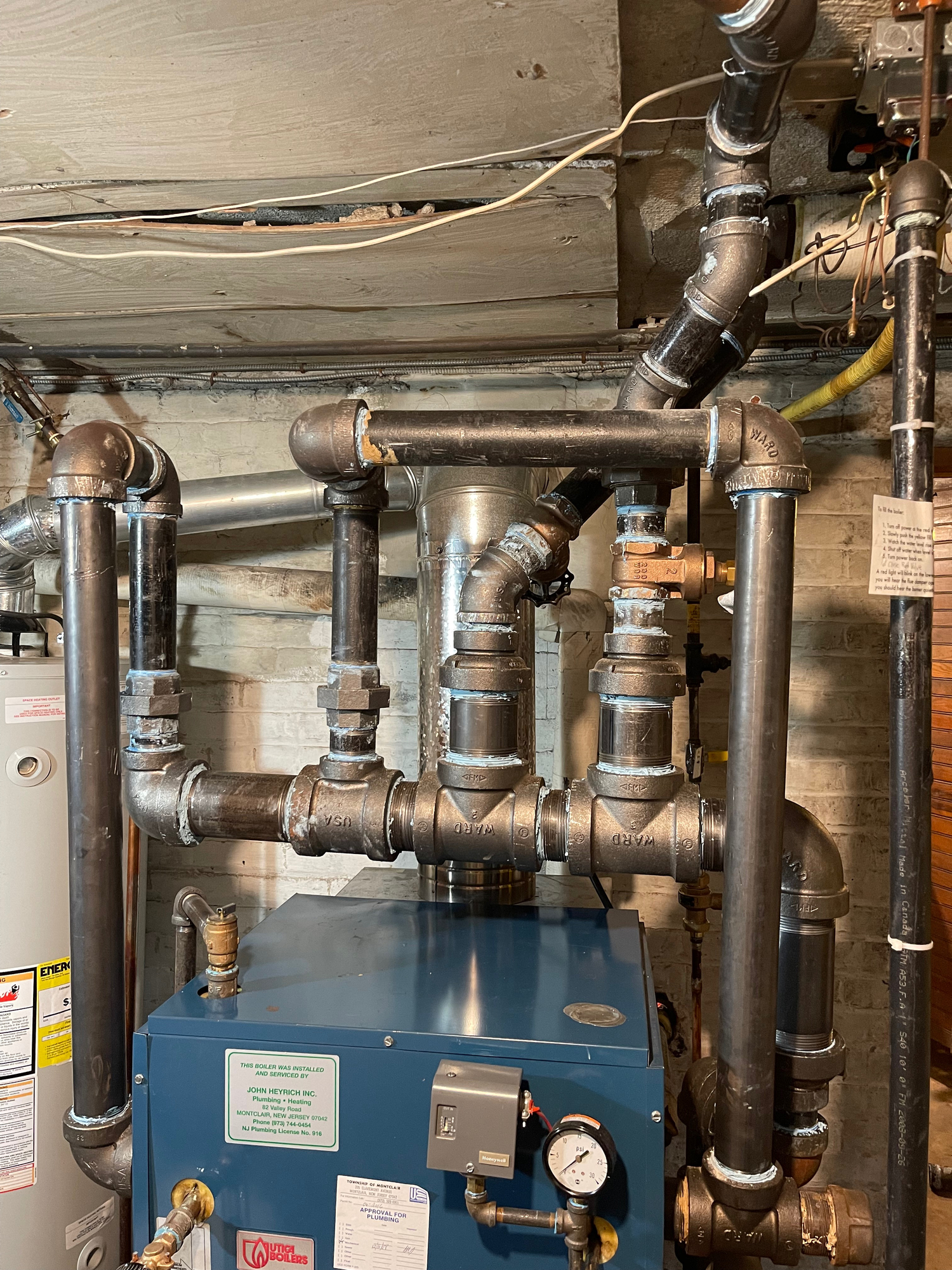 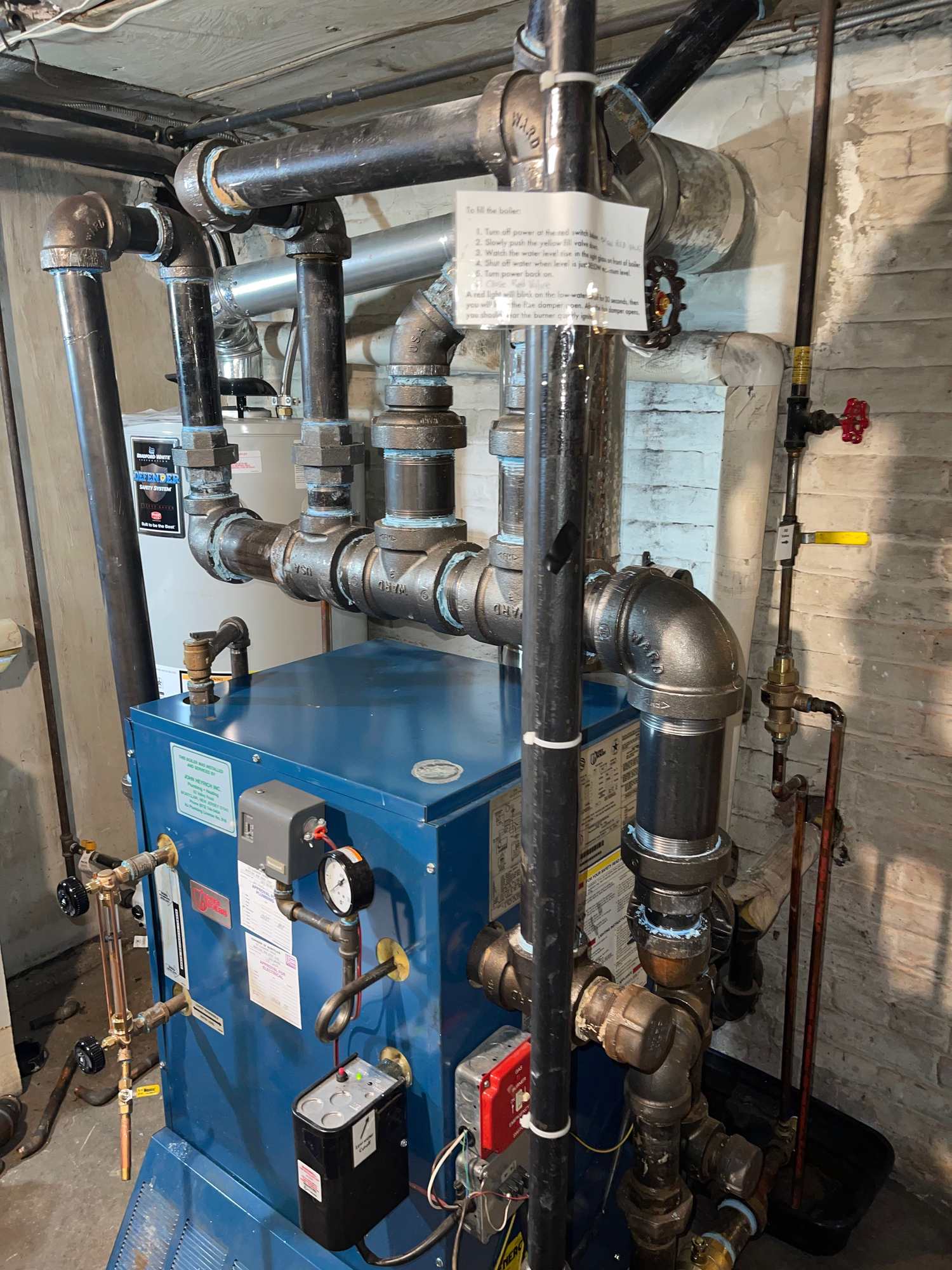 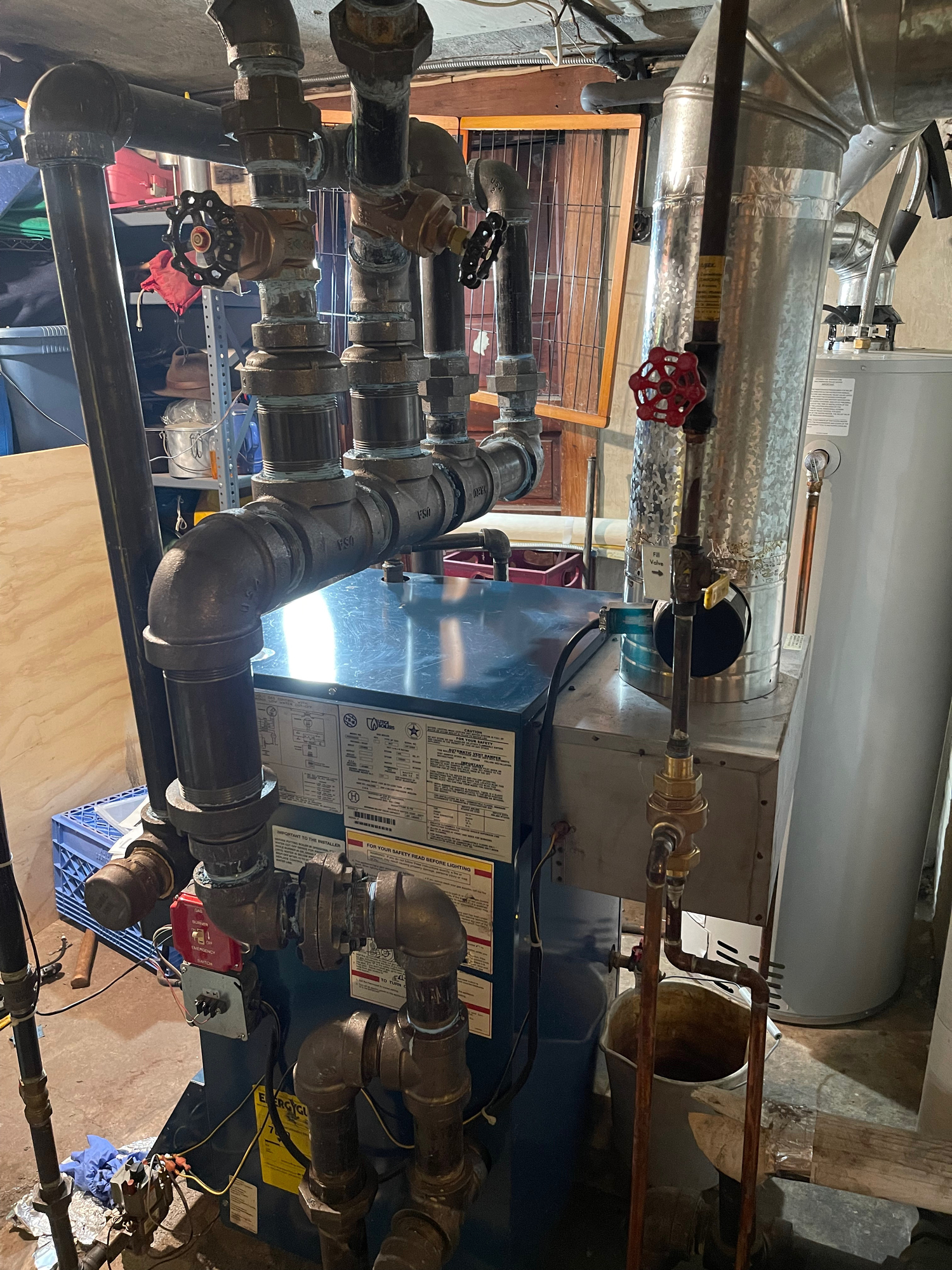 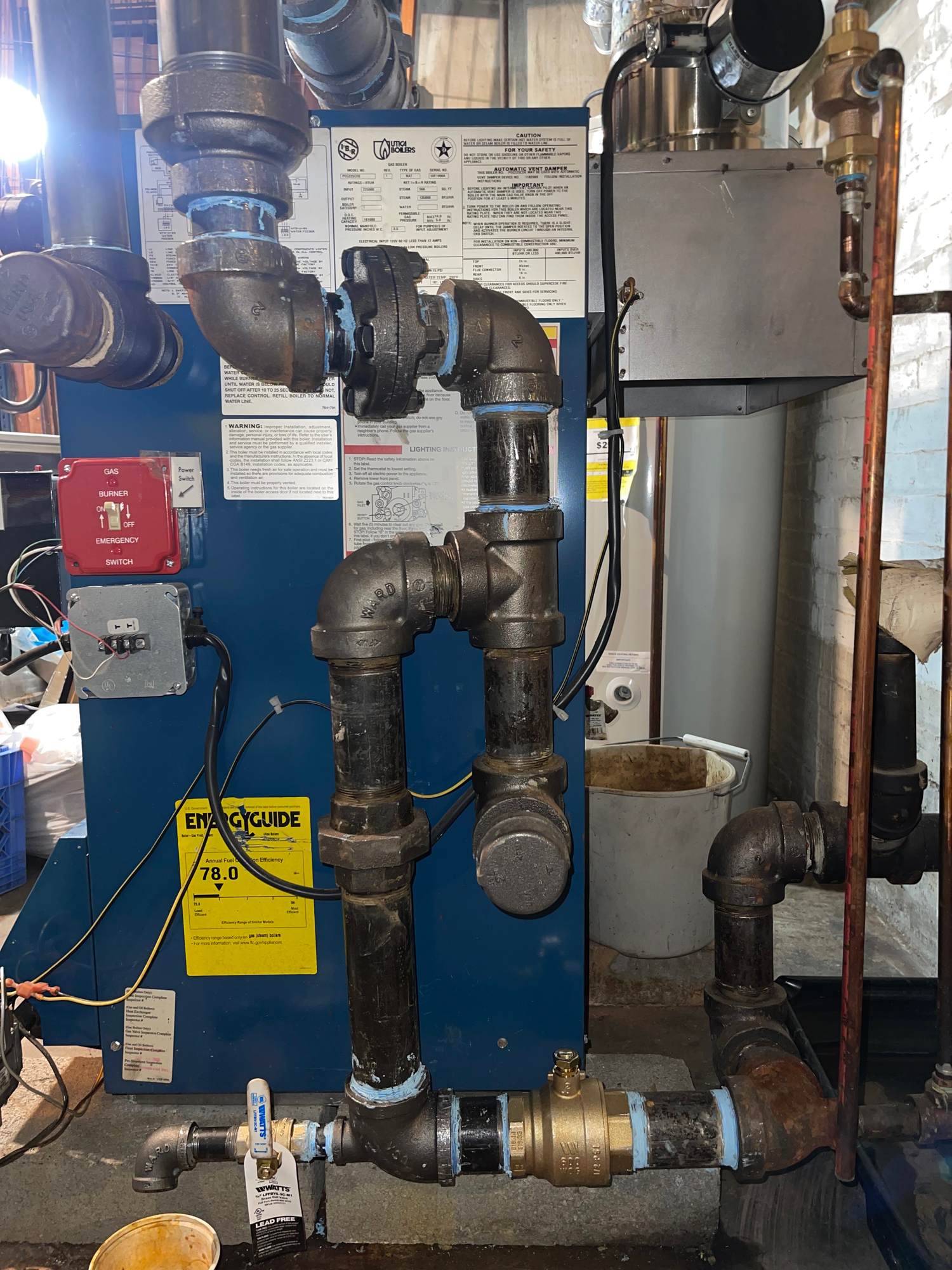 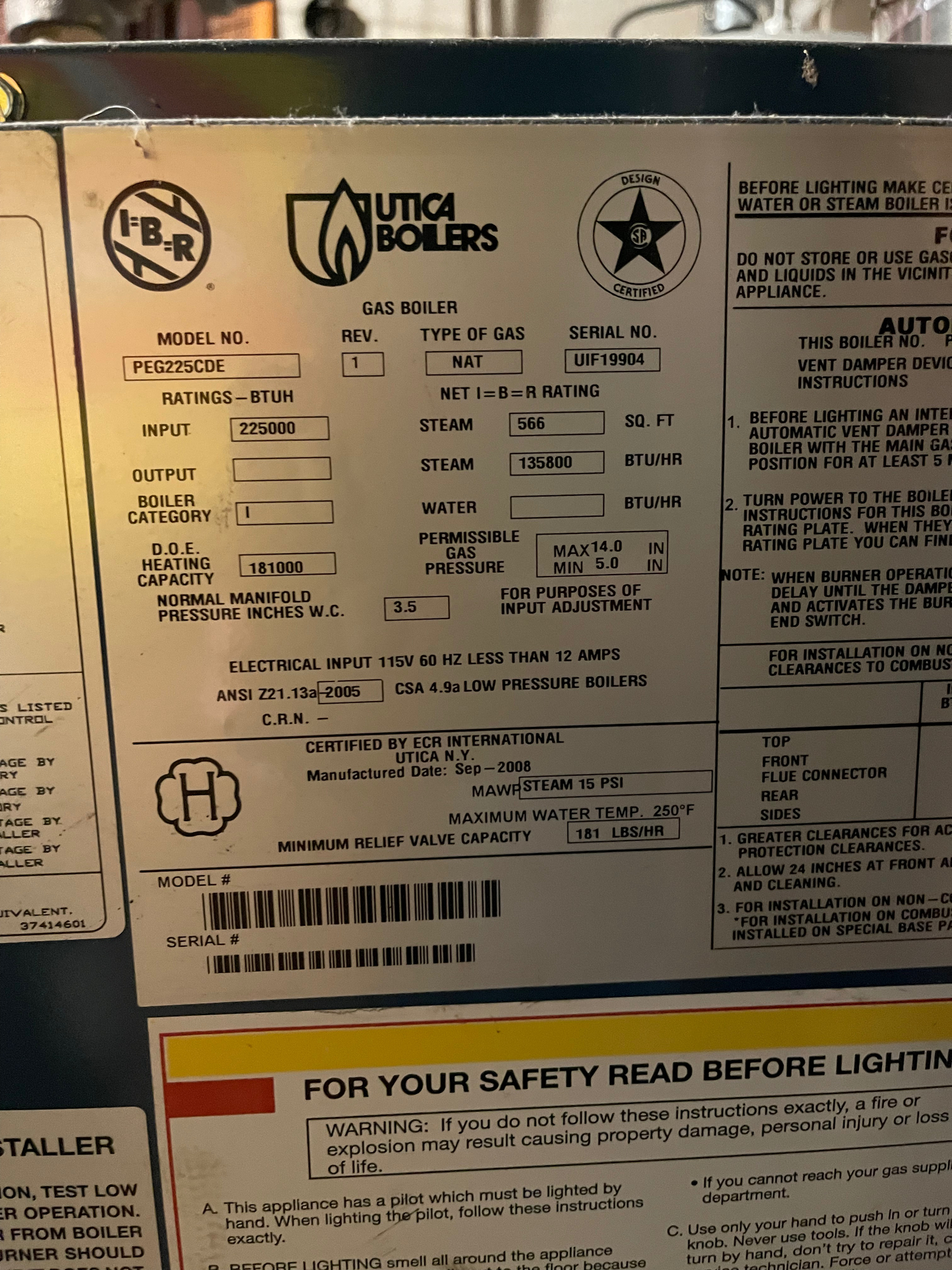