Hydronic Separation - Is it working?

jdbs3 Member Posts: 27
September 11 in Radiant Heating
Reference attached picture - Bosch Greenstar condensing boiler with system components. The boiler is attached to the tees making it the secondary. The primary loop is the rest of the system which includes radiant floor zones, forced hot water baseboard zones, and DHW.

When all thermostats are set to OFF, the DHW is not calling for heat, and the boiler high limit is taken off Summer Mode (where the heating zone pump and consequently central heating are switched off), the boiler will run continuously. Yes, this is an issue; an HVAC person is coming tomorrow morning to diagnose/fix this problem.

However, the supply and return side system piping between the boiler and the black Buderus mixing station heats up over time as the boiler continues to circulator how water just within the boiler. In ~40 minutes, the water in this piping went from 74° supply / 72° return to 102° supply / 98° return.

The only circulator pump that was running wa 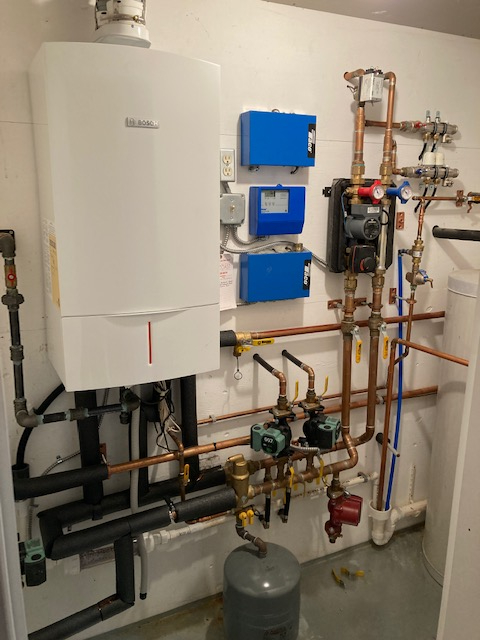 With hydronic separation of the secondary (boiler) loop and the primary loop, should hot water be migrating, over time, through the supply and return pipes to the Buderus mixing station.

If this is not supposed to happen, how is it 'fixed'?