You can tell how long ago this was "serviced"

Steamhead Member Posts: 14,851
May 4 in Oil Heating
by the fact that the whole bottom of the boiler was a mass of sulfur. Fuel oil has been ultra-low-sulfur for some years now: 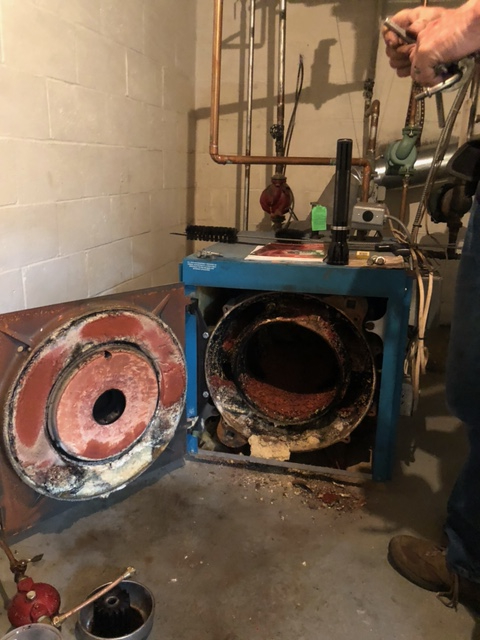 This is a Crown CTPB-5, a cast-iron Scotch Marine 3-pass unit, with a Beckett AFG. Besides the sulfur, it had a hollow nozzle when it should have had a solid, and the draft regulator had fallen apart. The house dates to about 1955, and has baseboard and convectors.

Took me most of a day to get it running properly- and my soot-vac was HEAVY when I finished. But it tuned up nicely.

Not the first time I've seen this when this particular oil company was involved. What were they thinking? If this house had gas service, I could have sold a conversion right then and there...............
All Steamed Up, Inc.
Steam, Vapor & Hot-Water Heating Specialists
Oil & Gas Burner Service
Consulting
0