Trouble with Slow Radiators and Dry Returns on One Pipe System

merikus Member Posts: 36
October 9 in Strictly Steam
TL;DR: On my one pipe steam system with dry returns, one of my steam runs is 2 to 3 times the length of the others and is slow to heat. It has the same vent as all the (much shorter) others--a Vent Rite #31, vented at the end of the dry return. When I tried open pipe venting as a test (suggested to me by a steam guru--I removed the vent and turned the boiler on), water spewed out of my dry return like Old Faithful. My local steam guy doesn't seem to appreciate the issues I'm having, and I don't know where to turn.

The main problem is with the south main. This main services 4 radiators. This is the longest run of the system, at least double or triple the length of the other 2 runs. The thing is these 4 radiators--particularly the two at the very end of the run--just don't get hot. I hear them slowly venting through their radiator vents, but by the time all the other radiators are cranking away in the house and the thermostat turns off, these are barely warm. I checked all the simple things--the radiator vents are not clogged and the valves are fully open.

My first theory is that since this run is so long, and since it is using the same exact vent as the other two runs (which are approximately the same size as each other), the problem is that this thing just needs a faster vent than the other two. So I remembered what a steam guru told me (who I won't identify here but this guy is a true expert and I spoke to him via phone and email)--nothing vents faster than an open pipe--and took off the vent for that run and turned on the boiler to see what happened. I was told that would give me a good idea if I could properly vent that run using just one vent in the same spot as the current one, or if I might have to look at other options (e.g., having a whole new T put in somewhere for a much larger main vent).

I sat there and watched it, and after about five minutes of the boiler running and air coming out of that open pipe, water started spewing out of the open pipe like it was Old Faithful! I quickly hit the emergency off (I was standing next to it) and grabbed a bucket. It kept spewing water for a while before subsiding. I took a quick peek at my boiler sight glass and it was sitting right where it was supposed to be, directly at the recommended level line printed on the boiler.

I took a look at The Lost Art of Steam Heating Revisited, and on Page 102-104, it talks about the near boiler piping and the Hartford Loop. So I took a look at my near boiler piping (diagram and picture below), and I noticed that while I have a Hartford Loop, I don't have a bleeder/equalizer. In theory, that means I should have a check valve on there somewhere--and either that check valve does not exist or is stuck. I have no idea what a check valve looks like, but frankly there's nothing that looks like a valve to me--it all looks like straight pipe.

Picture of near boiler piping/Hartford Loop: 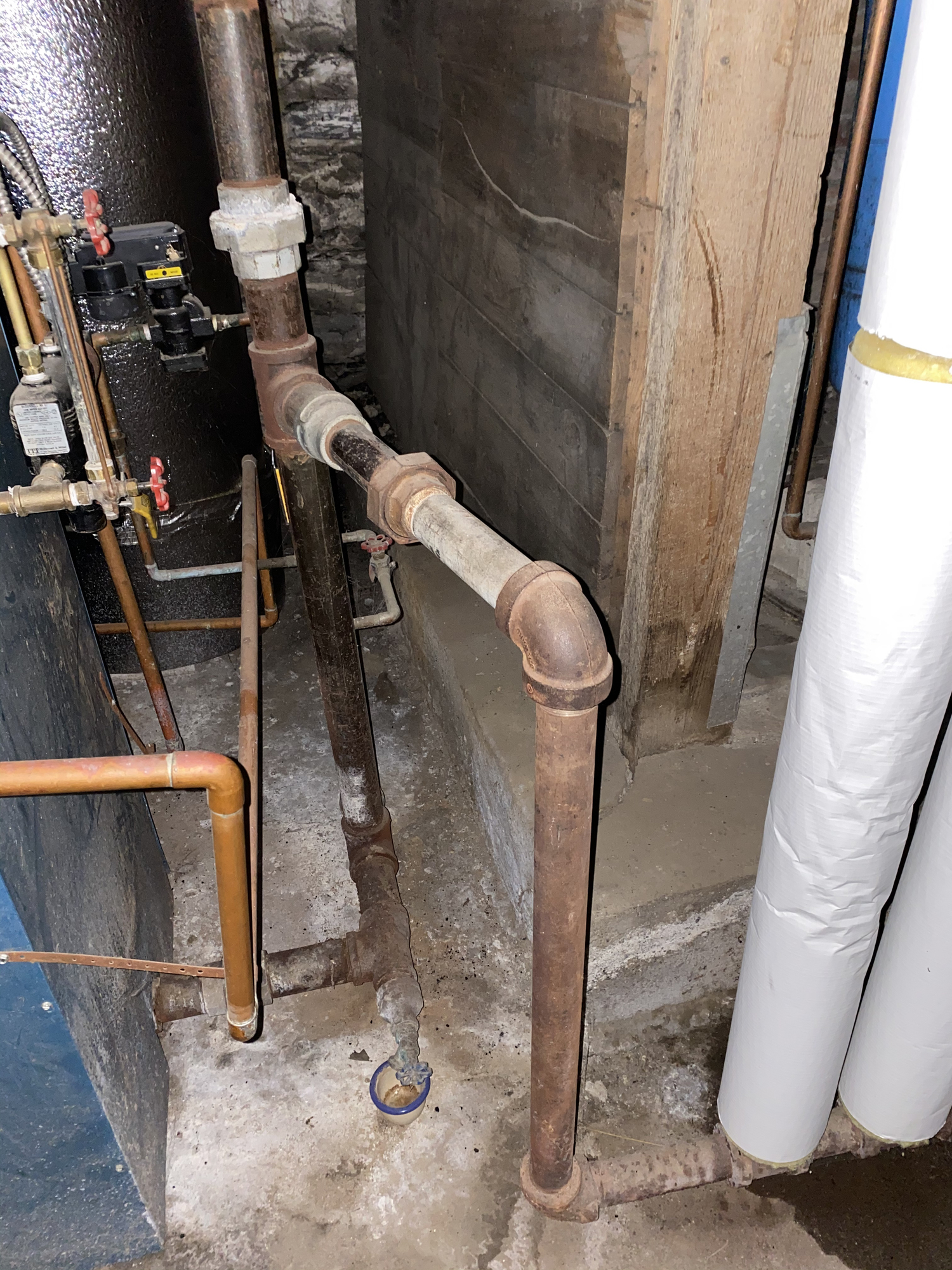 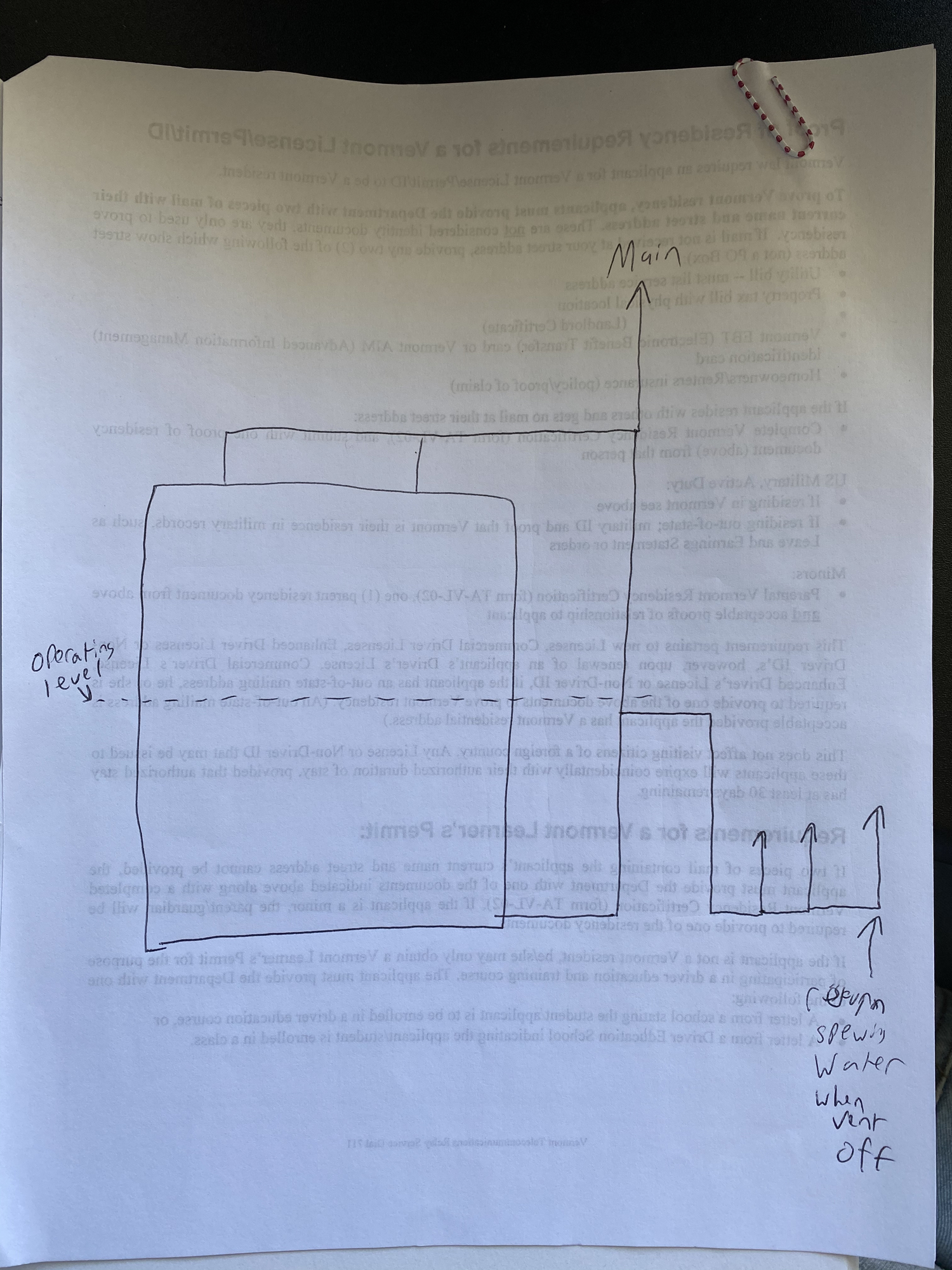 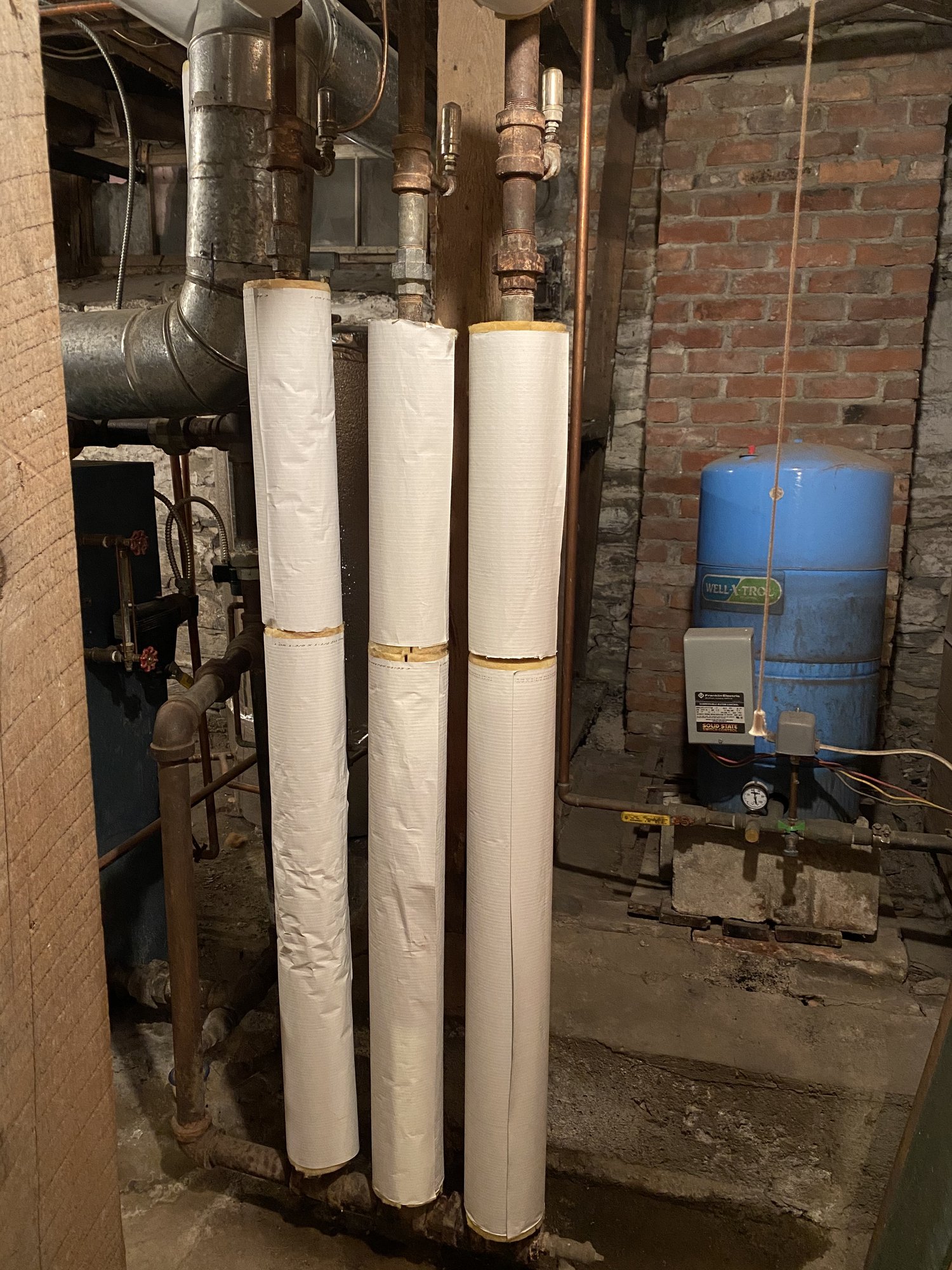 Close up of bottom of drip connections: 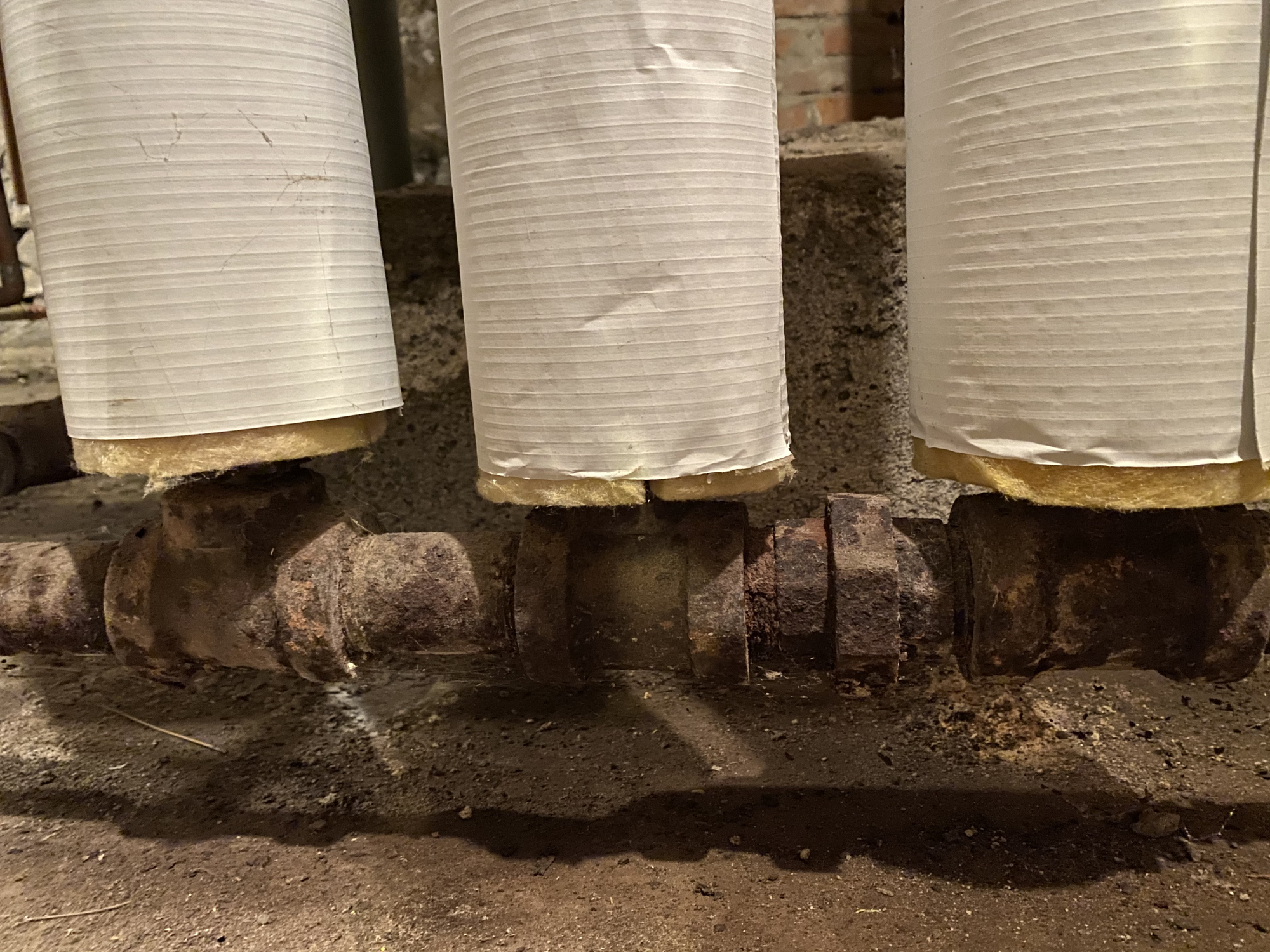 Another close up of the bottom of the drip connection: 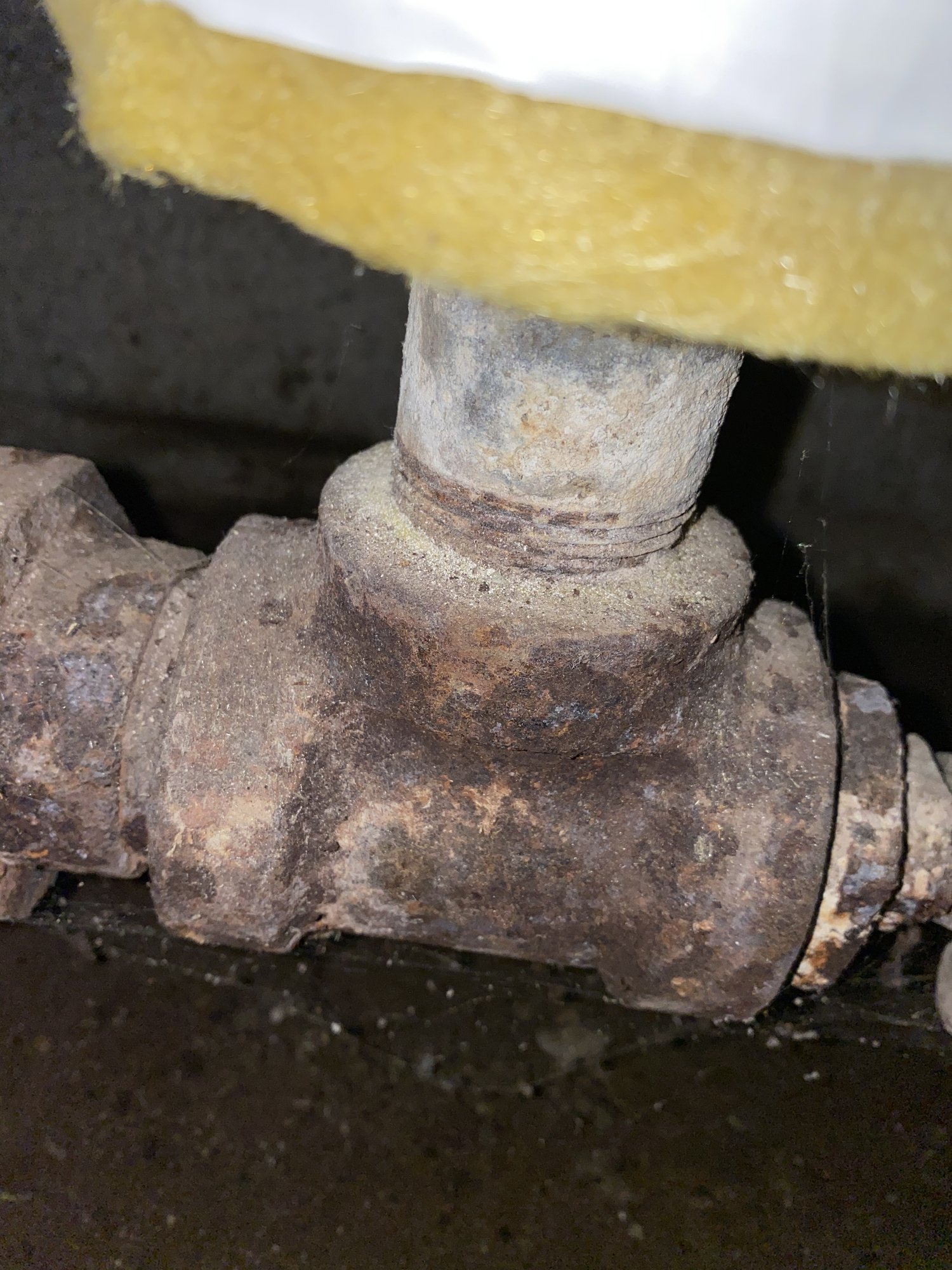 If Theory #2 is right, I have another issue that may be related. The PSI gauge on my boiler gets very very high--typically around 25 PSI. I watched it carefully this morning, and about 10 minutes after my boiler fired, the PSI started climbing rapidly until it topped out around 25.

I know this could be a dangerous situation, but I don't think it is actually getting that high of a pressure for 3 reasons:

1. If I was actually at 25 PSI, my radiators would be whistling like crazy. They are operating 100% normally, with just a little wisp of pressure coming out of the vents.
2. If I was actually getting up to 25 PSI, that means both my check valve and pressuresol would have failed, and that doesn't sound likely.
3. I called my local plumber who has serviced this system for years, and he said it's fine, "just a broken PSI gauge, we'll replace it when we next come out."

That said, since I indeed lack a bleeder/equalizer, and since I either have a failed or non-existent check valve, doesn't that mean the system is working against itself? Steam is pushing up the mains and it is also pushing up the dry return, and they are squeezing the air between them, perhaps causing the PSI gauge to register high?

That said, I'm not really sure what to do next. I looked at the local contractor tool here on this site and there's no one anywhere near me. I had my local plumber come by (this was before I ran this test and started having these issues), and while it sounds like he has the expertise based on his background (he has training in steam systems and even has taken a workshop put on by Dan Holohan), he said a few things that gave me pause:

1. He told me my pressuretrol settings should be .5 PSI with a DIFF of 3, when literally everything I have read has said to keep the DIFF at 1.
2. He didn't seem to think insulating the pipes was a good idea, when pretty much everything I've read has said that insulating is a critical part of a well maintained boiler system.
3. I talked to him about my concerns about the main vents being undersized and not allowing the radiators to heat properly, and he didn't seem to appreciate the concern I have, and said the radiator vents would take care of it (clearly they're not).

I'm sort of lost as to what I should do next. This is old, old pipe, and I certainly do not have the skills to install a bleeder (since it would likely involve having to crack open the old rusted together pipe). At the same time I'm feeling like my local plumbing guy doesn't have an appreciation for the problems I'm seeing with the system, and I have no idea how to find someone who is willing to take the time to understand the challenges I'm facing and propose solutions to fix them.

Any suggestions would be greatly appreciated!
0
«12»