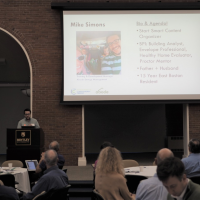 mrmikesimons Member Posts: 21
July 2020 in THE MAIN WALL
Hi.
I'm closing on a house in central MA next month. It is a 2500 sqft home built in 1909 with single pipe steam heat tied to a 200kBTU boiler installed 2 years ago. This system provides the distribution for the main part of the home, and a 70kBTU hydronic boiler for an in-law apartment for the addition. For the last ten years, I have worked in energy efficiency (Mass Save program) and will be retrofitting the home and (hopefully) significantly bringing down the load.
Here are my concerns-- for a regional conference this year I have looked really closely at Manual J sizing for different envelopes of homes. For an equivalent home, I was getting around 36BTU/sqft which would put the home's design load at ~90kBTU. So I'm thinking that with the home's existing systems they would be over 200% over-sized when taking into account distribution losses, cycling losses, etc.. I have seen the previous owner's gas bills and they paid around $1,000 this past January in heat, which makes me feel like my already horribly over-sized assumption is correct)

About a year back I attended one day workshop on pellet boilers ran by John Siegenthaler, were I was introduced to the concept of thermal storage and pairing it with low temperature hydronic distribution.

So a few thoughts--
*Is it possible to pull out the steam distribution system, save the boiler and lower the temperature of the system that it is just supplying heat to thermal storage? Which would be tied to new low temp hydronic radiators?
I'm interested in low temp hydronic, because I'm looking forward to the day that air-to-water heatpumps are market ready in the US, and would love to power my heat off renewables + storage (when that day comes) and/or tying the system to Solar Thermal to provide the bulk of the heat during the shoulder months.
*Would it make much more sense to just leave the steam system alone, and any new distribution should just go off of the existing hydronic boiler? That system is over 20 years old, and I would love to only have one system to maintain.
*Should I just slap in a few ductless mini splits because it will be both cheaper and easier, and wouldn't have to deal with window A/Cs.

Many many many thanks,
-Mike

Putting the fun in fundamentals of energy | Central MA
https://www.linkedin.com/in/mrmikesimons/
0