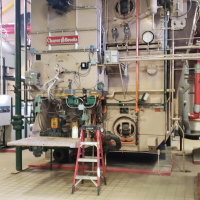 triggerhappy24 Member Posts: 42
September 2019 in Indoor-Air Quality
So I know this is a little out side the boiler spectrum, I just have anyone to ask so hopefully some one can help.

I'll try and make a long story as short as I can. We bought a house last year and the house is 95% efficient as a build....HERS rating I believe? Supposedly it is buttoned up very tightly and insulated very well also. Now there are a few problems I thought where odd when I moved in. 1. The ac unit is 1 ton less then required for square footage of the house. 2. I have 2 bathroom fans that run 24/7 to circulate air. 3. My furnace has a fresh air intake on it.

Now this was all to meet some kinda of code out there. So the problem we had was too much humidity in the summer (over 70% inside house) and could not get any humidity in winter even with a humidifier on the furnace running all the time. In the summer what was happening is the duct work was sweating so bad it was raining in some of the homes (luckily not mine) so the engineer for all this said they want to put in a energy recovery ventilation system to help with the problem.

Now I have one at my work that is the size of a bus but it doesnt really do that good of a job from what I can tell. It will take 80 degrees and drop it to about 75 or 20 degrees and bring it up to about 25. But I really dont know how well it will extract humidity?

Does anyone have any good info or help with it for me? Any info will be greatly appreciated!!
0