I’m going to apologize in advance for the length of this post, but I fell it’s important to include too much history and information rather than not enough. When I originally tried posting this, it told me it was too long, so I have to break it into two posts, this in the 1st part and the 2nd part will be the 1st reply.

I’m very new to this site; I actually stumbled across it by accident through Google searches about steam heat and seeing a couple of Dan’s videos on YouTube. The company I work for, we do repairs and work on existing steam heating systems, but 90%+ of the heating work we do in new construction is hot water, for obvious reasons. We don’t mess with ductwork; we leave that for the tinners. Even though I’m only 33 years old, I know quite a bit about hot water heat since I have been working in the plumbing field “officially” since I was 14 years old (I actually knew how to operate a backhoe before I knew how to ride a bike because when I was a kid my parents couldn’t afford daycare so I rode in the backhoe with my dad while he worked, and since then I was hooked on heavy machinery & plumbing).

As I said, we primarily install hot water heat, but we do service steam boilers and steam systems. Perhaps it’s the history buff side of me shining through, but I have always been fascinated by steam, whether its steam engine trains or whatever. But I’m a plumber, so why not be fascinated by steam heat, right?

I realize a vast majority of this group is from the New England states where steam was and is still a primary way of heating, and I live in the upper rural Midwest. Surprise, we have heat here too, and cars, and internet haha. Joking aside, there are still a lot of old houses and buildings here that are still heated by steam. Although, most modern homes are heated by scorched air and some upscale homes go for hot water infloor heat, however the vast majority of our hot water heat (and chilled) is in commercial buildings where we pump hot water (and/or chilled) to VAV’s.

There are a few people at work that know a lot about steam heat, but they’re all older, and one of them that was a genius on it retired last year at the young age of ~70 years old, so my options of people to ask about it are becoming more and more limited as the steam experts retire and us younger hot water guys are left not knowing any of the knowledge they have. I always kick myself for not asking more questions about steam heat while the opportunity still exists, but you don't really think of it when you're almost always working with hot water. The only time you really think about steam is when you have to do work on an old system.

Sorry for the not so short & sweet back story haha. Let's move onto some history of the property I'm curious about. My boss owns an apartment complex that was built in the late 1890’s or early 1900’s, probably shortly after your Dakota building was built; the only difference is this complex is actually in one of the Dakotas. When it was originally built it was luxury at the time, but as decades went on it fell into disrepair and had hobos sleeping in the hallways and turned into a real craphole (it’s only a block away from the old train depot, hence why hobos slept in the hallways). Once my boss bought it, he fixed it back up. It’s not luxury by today’s standards, but they're good apartments. The original complex layout (see attached picture for an overhead visual) is a 3 story main building, plus basement, in the middle and located behind the main building, and connected via an underground link in the basement, is an old garage/storage/coal unloading area on the ground level (the old train tracks that backed up to the garage door to unload coal are still buried in the parking lot; that's pretty cool), and the physical plant in the basement where two old brick coal boilers still sit, but were abandoned long before any of us were alive, and the complex now runs on natural gas. Along with the main building and the physical plant was an old dilapidated building that was torn down, and is now a parking lot behind two of the existing buildings. From an overhead view, to the right of the main building is an old 3 story, plus basement, Victorian home that was converted into apartments, and on the left side of the main building is a 3 story, plus basement, building that was once the original building for one of the schools here in town, but was also converted into apartments. I'm not sure when the apartment conversions took place, but the building in back was town down by my boss because it was in complete disrepair, it didn't even have a foundation left from decades of neglect. I remember walking through that building when he bought the place, it was nasty; hobos sleeping, peeing & pooping in the hallway, tenants would just throw their garbage in the hallway or out their windows onto the ground outside, just a filthy & ruined building. The other buildings were fixable, but that one was too far gone. 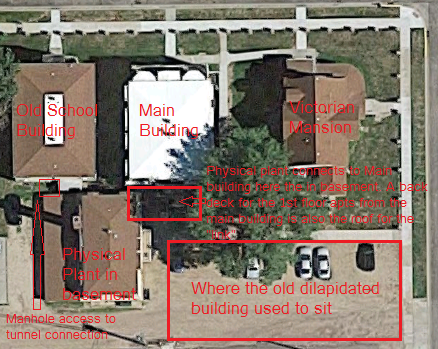 "Don't try to win an argument; instead, try to have a conversation." -Steve Deace
0