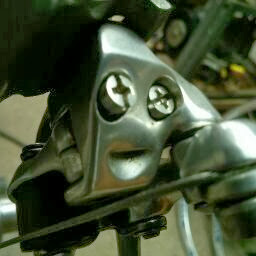 Back when Click and Clack were on the radio, they used to have a segment called "The Puzzler"...well, in the spirit of the Tappet Brothers, here is a puzzler.

I'm in Massachusetts, so almost by definition I have a small house...about 1100 sq-ft. Built in the 20s, has single-pipe steam heat. I read Dan H's book "We Got Steam Heat" and enjoyed it a lot and got to know my system well. My house has 7 radiators, I have Gorton vents on them ranging from 4s to a C, no main vents, gas-fired Weil-McLain boiler about 10-15 years old, Honeywell Pressurtrol, the standard stuff. The system works great.

A good friend of mine just bought a house down the street. Almost identical - maybe 1500 sq-ft, recent gas-fired Weil-McClain boiler, single-pipe, 7 radiators, Honeywell Pressuretrol, again standard stuff. No main vents either. I visit the house and it's cold and the boiler is short cycling. Runs for about 2 minutes, shuts down, about 3 minutes later, fires up, repeats endlessly. The near boiler piping is hot, a few feet down the line most of the pipes get cold.

I know what you're thinking. It's the same thing I thought.

I walked around the house (it had been sitting empty for a few months, maybe a year) and made sure the valve at each radiator was open. I also saw that there were old, dirty vents on all the radiators. I ran over to the hardware store and bought a couple Maid-o-Mist 5s. They only had 2 in stock so I figured it's better than nothing. I replaced the vents on the two coldest radiators and bingo! The boiler stopped short-cycling, the two cold radiators got hot. The house is now heating "OK" but less than optimal. There were still some really slow, dirty vents so I used the Gorton/MoM chart and ordered the rest of the vents. "C" in the upstairs bathroom - furthest from the boiler, a 4 in the living room with the thermostat, mix of 4s and 5s elsewhere. I installed them a couple days later, turned the thermostat up and stood back to admire my work.

I run down the basement - all the piping is hot now. The mains, the risers, everything I can feel before it disappears up into the house. My first thought is either a couple bad vents or the total venting capacity of the MoM vents is less than the total capacity of the dirty old vents even in their dirty state. I ran back upstairs and took 5 of the vents completely OUT of the radiators.

I open up the Pressuretrol, differential at 1 and cut-in at 0.5. Correct settings. Just for the heck of it, I crank the differential up to 4.

The water level in the boiler is of course fine, and I feel pretty confident it's not shutting down on pressure. And yes the thermostat is still calling for heat.