bostondan Member Posts: 19
April 30 in A-C, Heat Pumps & Refrigeration
We are installing an 8 zone Mitsubishi Hyperheat mini split system in our two-floor home (1 per bedroom, 2 per floor outside of bedrooms). Our installer has made a recommendation for where to put one of the downstairs units, but we discovered there was a misunderstanding about where the head unit would go and I was hoping you could provide advice on which is better and if our preference would be problematic.

Our installer recommends installing a unit where the green arrow is. We had thought it was going where the red arrow is.

Our reasoning is that the red arrow (above door) points more directly at the office area (desks visible in photo), which is heavily used and would benefit most from heating and cooling.

Installer's reasoning is that the green arrow (adjacent to door) points down the hallway (pink arrow) and would distribute heat better throughout the entire lower level. I provided a panoramic photo in an attempt to show the entire area.

Will putting it above the door (red arrow) be problematic? Am I correct that it will provide noticeably more heating/cooling to the office area? Or will the fact that it is in open space make it a negligible difference?

There is steam heat backup upstairs and water heat downstairs. The steam heat works great in very cold weather, but the water heat is not good and underpowered (according to multiple people we had look at it). The steam pipes running upstairs (visible in panoramic photo) through the downstairs honestly provide more heat to the downstairs than the actual water heat baseboard radiators do. Those steam pipes run through the hallway (floor to ceiling), but not the office area, so hallway tends to stay warmer than the office in the winter (despite open floor plan), in addition to the office being next to an exterior wall.

Thanks in advance for your thoughts. 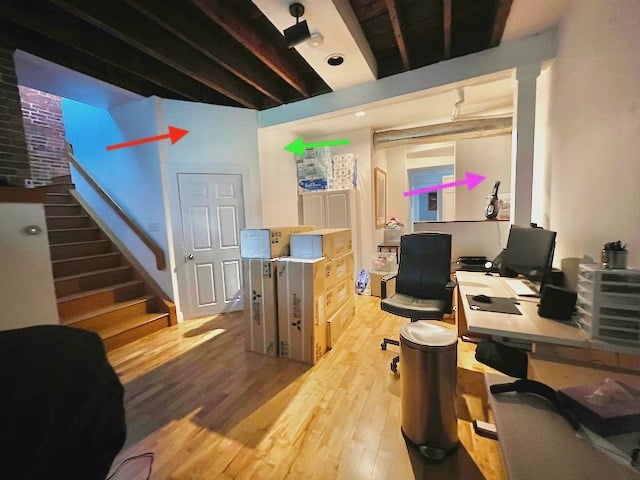