I bought a home last fall and have a number of remodel projects planned for the near future. I will need to commit to a new heating and cooling plan, but the existing setup is kind of a mess. 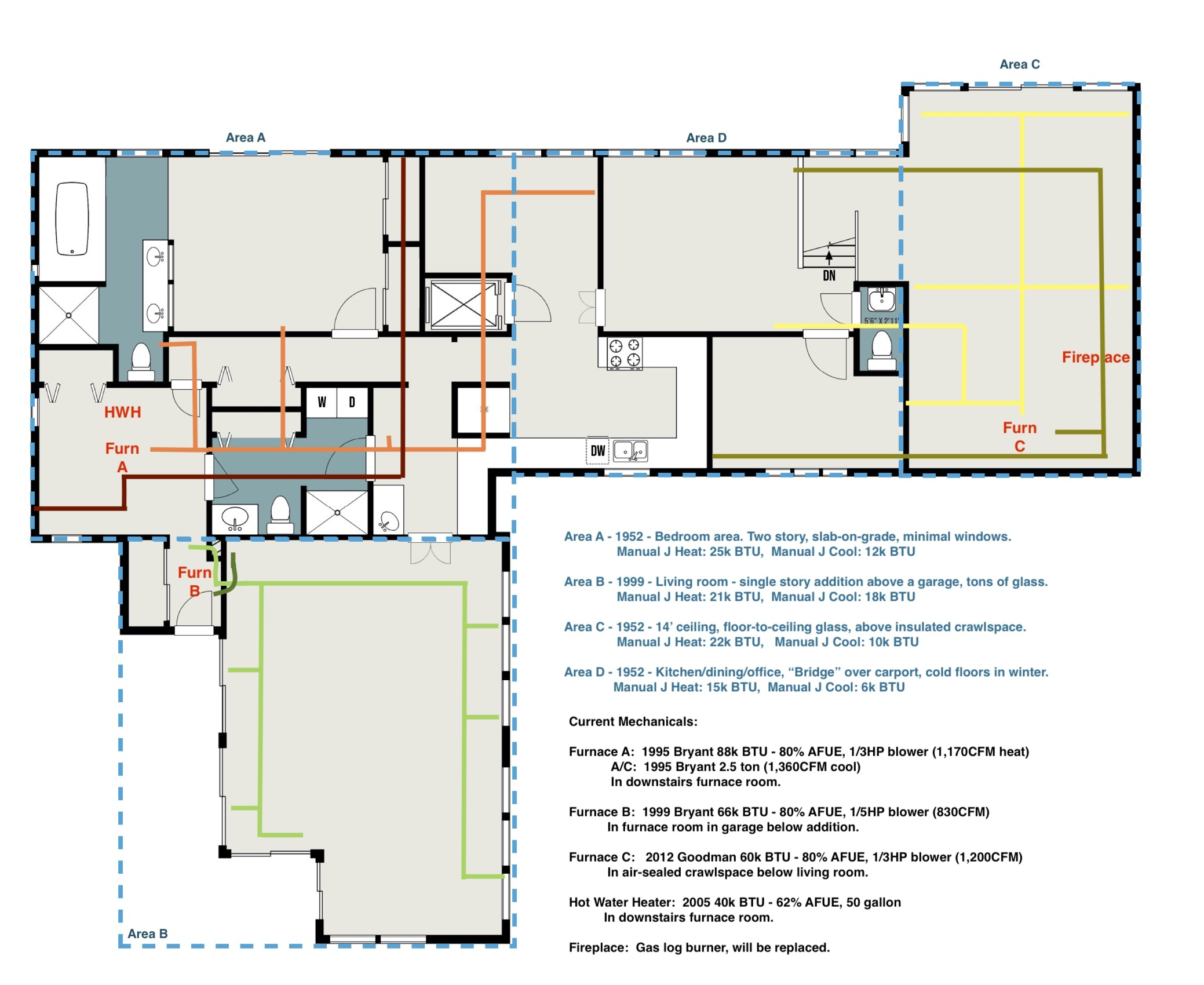 I currently have 3 gas furnaces varying in age from 30 years to 10 years old, though they're all very basic, 80% efficient units with single speed fans. My house is mid-century style with high ceilings and thin (poorly insulated) roofs. The largest of the three furnaces, which is the one that services the bedrooms, has a 2.5ton A/C as well, but none of the other furnaces have any cooling or dehumidification. The previous owners said this setup was basically fine, that indoor humidity wasn't an issue for them in the past.

Obviously all 3 furnaces are oversized and inefficient so the 'obvious' answer is to just replace them where they sit with more efficient / modulating / variable speed units and move on to some other project. This is what the 'comfort specialist' from the local HVAC company suggested.

I can't help but think though that this would be a pretty good setup for hydronic air / radiant floors though? Furnaces A & B are ~10ft apart but on opposite sides of a cinderblock wall below grade, so I could definitely run piping between them, but the shared wall isn't large enough to 'just' connect the ductwork instead to zone a traditional furnace. Furnace C is on the other side of the house across the bridge between the two main living areas. The ceilings in area C are very high (14ft) and the room has a lot of single-pane glass. We're going to replace the flooring on that side as well across the whole 'bridge' (Area D in the picture) so it would be an opportune time to add in-floor radiant as well to make that whole section much more comfortable.

I ran my own Manual Js based on the current structure and came up with the figures in the picture. We have some exterior projects planned where we'll insulate / air seal better and I'm going to add more foam to the roof when that's replaced in a few years, so the overall load on everything should decrease.

Using something like a Combi-boiler could replace the HWH as well, so we could go from 4 gas-burning appliances to 1 which definitely appeals to me..