Help to determine the correct size & type of chimney liner.

MikeAmann Member Posts: 422
January 17 edited January 20 in Chimneys & Flues
After reading many of his replies, I sure hope Bob Harper is still around...... 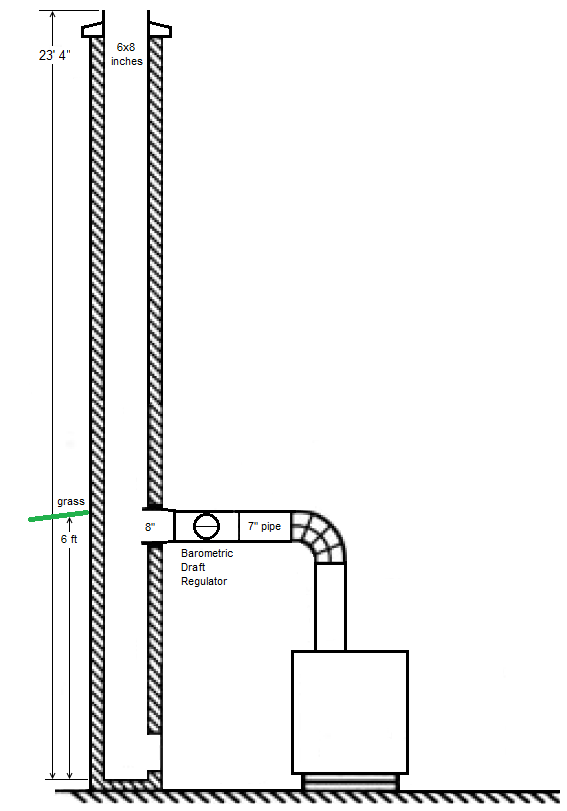 Up the Chimney
The gas going up the chimney or exhaust pipe includes a large quantity of water vapor. When everything is working properly, the vapor is pushed up out of the end of the pipe and into the atmosphere before it condenses. If something is awry, the vapor cools before it exits the flue and condenses right then and there. In order to stop the vapor from condensing, conditions must be adjusted so that it does not cool before leaving the chimney.

Size Matters
A flue that is too large allows too much air to circulate, making it difficult for the warm gas and vapors exiting the furnace to create a strong updraft up and out of the vent. Instead, cold air from the top pushes the warm air down and traps it in the flue. As the vapor sits in the flue it cools, creating condensation.

Downside of Upgrades
New furnaces hooked up to existing flues can result in condensation problems because they are more efficient than old models. While much of the heat produced by older heaters was lost out the flue, this heat prevented condensation by keeping the chimney or vent pipe warm so that air moved upward. Newer models keep most of the heat moving into the home, which results in a cooler flue. This means that the vapor has a much greater chance of cooling and condensing in the flue than it did with the old furnace.

Danger, Danger
Condensation in the flue or vent pipe is not dangerous in itself, but can create a dangerous condition. Over time, the moisture, as well as the chemicals released by the furnace, can damage the flue and vent pipe. Rust and corrosion create leaks that allow the vapor to make its way into your home. This exhaust from the furnace contains dangerous carbon monoxide. Have a technician check the flue for leaks and test your home's carbon monoxide levels if you notice moisture in the furnace vent. Carbon monoxide is odorless and colorless, and it can be deadly.

Recently I made my oil-fired burner more efficient (84-86% now) by converting to a flame-retention head and reducing the firing rate (currently .71 GPH), and now it is raining inside my chimney flue. It's an exterior chimney (3 sides exposed) and the clay tile flue liner is 6" x 8" and has no bends or offsets. No other appliance shares this flue and the water heater is indirect. The other flue is for the fireplace, which will never be used by me.

I have been doing the research for the last few days and I believe I want (need) a smooth wall heavy gauge 316 stainless liner with an outer wrap of insulation (no TherMix). I definitely do not want a thin-walled corrugated liner!

This boiler has a 1.10 GPH max firing rate and the flue collar is 7" round.
If I were to use only a 1/2" of insulation around the outer diameter of a round pipe, then the maximum diameter of pipe that I could squeeze through the 6" x 10" rectangular clay liner would be 5".
Is that too small for my firing rate?
Is rectangular pipe available to do this?
0
«12»