Ironing out the kinks...

Sorry in advance for the long post; I'm a bit wordy.

My wife and I bought a 1918 colonial in northern NJ in 2020. We installed central air that summer and decided to keep the single-pipe steam, despite my early protestations. I work in construction and am relatively handy, but I never thought I would be the guy buying a big, old house and inviting the inherent maintenance while also trying to start a family. It is truly a labor of love.

The previous homeowners had a fire in 1997; the home was gutted and rebuilt in 1998. Everything was brought up-to-code with walls insulated, modern electricity installed, and plumbing updates where needed. A Peerless 61-06 200k BTU natural gas boiler was installed (not sure what they had before) and connected to the original steam piping, with some minor revisions here and there. At the time of purchase, our home inspector performed his rudimentary overview of the system and declared it 'functional'. We were informed that we probably had another thirty-or-so years of life in the boiler, and we were convinced by various parties to keep the steam heat.

Not knowing much (anything at all) about steam heat, I falsely assumed the system had been installed properly in 1998 and maintained properly since. The cracks literally and figuratively started forming during the first week of heating season in 2020. We had several cold radiators, occasional banging noises, and seemingly high gas bills. While wrapping up some loose ends, the central air installer replaced our two old, cheap, crusty main vents with Gorton #1s. I started doing some research on steam heat, frequenting this forum through google search results, and I even added 'The Lost Art....' to my Christmas wish list at the risk of becoming the butt of my many in-laws' jokes. Shortly thereafter, I soaked the fifteen Heat Timer Varivalve radiator vents in some hot vinegar and seemed to get a few of them breathing again. I also replaced all of the controls fittings, adding a new 0-30PSI main gauge on a new pigtail, and a 0-5PSI gauge adjacent to the pressuretrol with a new pigtail serving both. We had some colder rooms throughout the home, but the system was working well enough to focus on various bigger fish in need of frying. I blew down the LWCO every 1-2 weeks, added water as needed, and called it a day for the year.

At the start of the current heating season, I replaced all radiator vents throughout the home with Vent-Rite #1As and set them roughly where I thought they should be set, being too lazy/busy to do calculations right now. I also had another HVAC guy come in to perform basic boiler maintenance; I believe he just flushed the return pipe and cleaned out the controls piping and LWCO. Regardless, I finally had every radiator getting warm, but then I seem to have opened a can of worms after an unintentionally large setback recovery one day in early December. One of my Gorton #1 main vents was getting stuck open, causing my second and third floors to get quite warm while the boiler continued to build pressure and run itself down until the LWCO kicked in. Okay, truth be told, I accidentally placed my large console humidifier RIGHT below the thermostat (dunce cap) and realized after one day that this was a very bad idea. It was after this debacle that I really started researching and digging into my system. So far, I have identified the following "deficiencies" needing to be addressed:

1. Near-boiler piping. My header is just a mess. The header itself is too low, there are no offsets, and both main takeoffs are between the boiler outlets. Did I mention it's a mess? I'm fairly certain I'm getting a ton of water up in the system, causing repeated problems with one of the main vents. I also have some copper pipe there, but I know it converts to black pipe somewhere inside that insulation; everything else throughout the system (away from the boiler) is black pipe. My thought process here is to add offset elbows facing the wall behind, reroute the header so it exits to the right side of the boiler, elbow down and back toward left side, takeoff both mains, and finally connect to equalizer piping. Also assuming all copper should be replaced with black pipe. Obviously none of this work would take place until the summer, and I'm debating whether or not a handy homeowner should attempt this by himself. Also debating if all of this work is worth doing on a 23 year-old boiler. Thoughts? 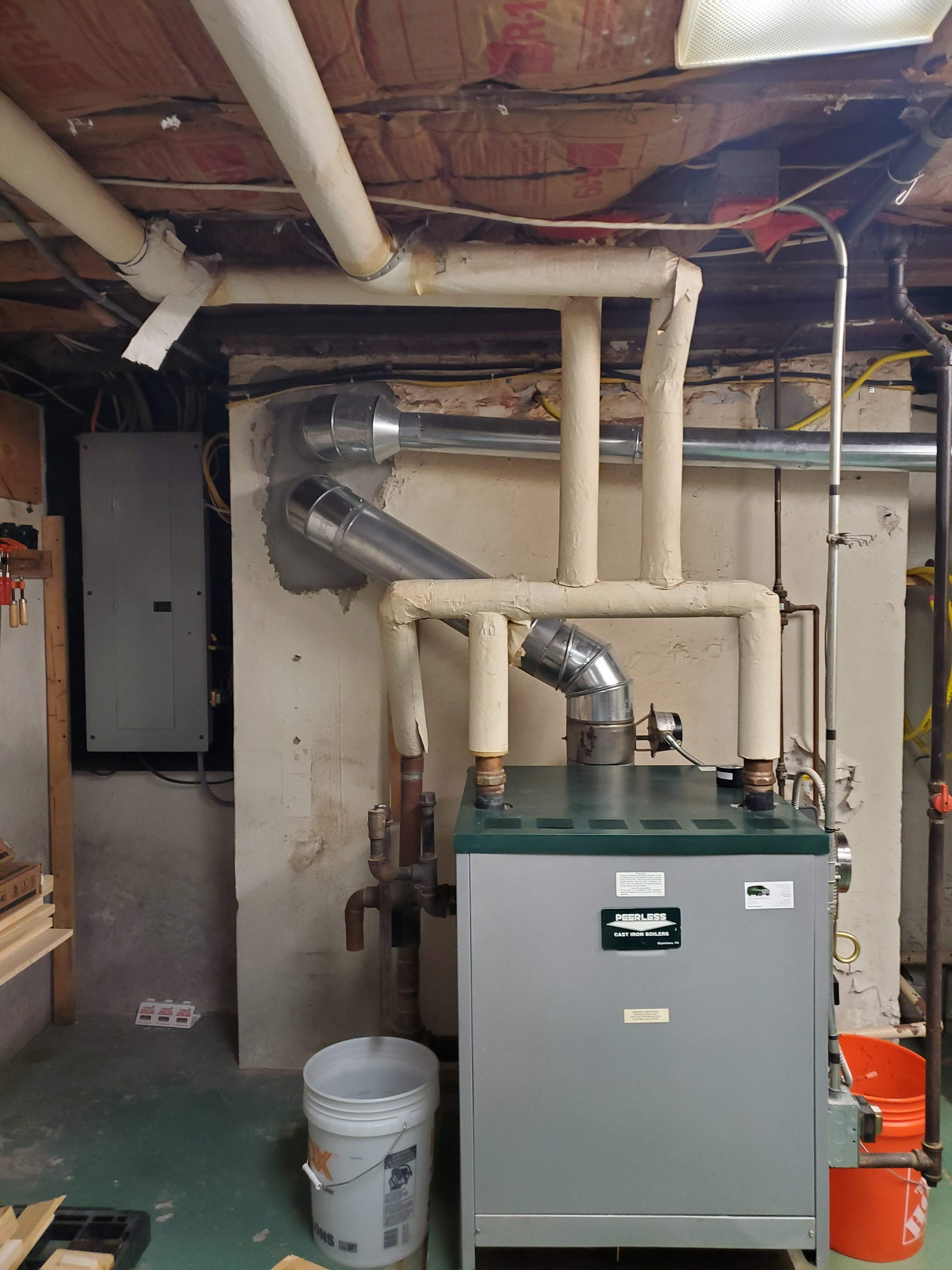 2. Skim tap. The HVAC contractor who maintained the boiler wasn't sure why I would have a valve on the skim tap. There is a badly corroded nipple (I think?) between the skim tap and said valve (was leaking slightly during the high pressure incident), so I need to do something with the tap. Should I just get rid of the nipple and valve assembly and just cap the skim tap? 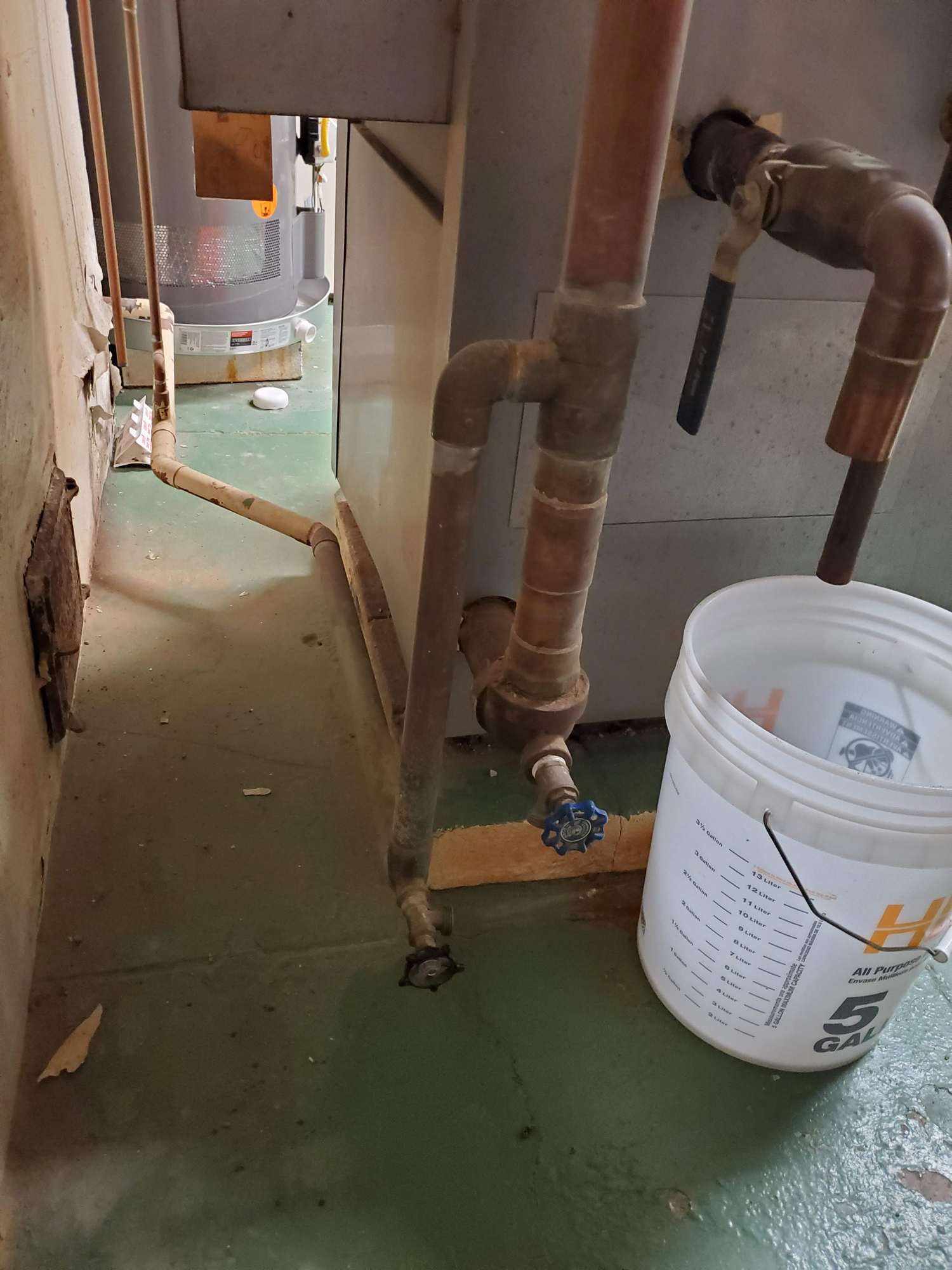 3. Main piping (2-inch). A significant portion of one main is uninsulated, which likely happened when we had the drywall ceiling removed in the whole basement to help with A/C duct routing. I know this needs to be remedied to avoid steam condensing before it hits the risers, but are the 3-ft sections of fiberglass pipe insulation really my only option? Seems time-consuming and expensive, but I can't find a source that sells longer pieces. While I'm at it, is it really necessary/beneficial cost-wise to insulate the return piping? Most of my return is currently uninsulated.

4. Main venting. Both main vents are taken off with a 1/4" tap at the return drop. Obviously this is wrong for several reasons, but I am somewhat limited on relocation of both taps. The longer main (about 50-ft of 2" pipe) now has ductwork above the last ~18" and has two takeoffs immediately before the ductwork, so I cannot tap the top of the pipe here. My thought process is to tap the side of the main a few inches after the last takeoff, then elbow and long nipple back away from the wall, then up as high as possible either into a single Gorton #2 or split into two vents with a tee, if necessary. Thoughts on this arrangement and on quantity/type of vents? 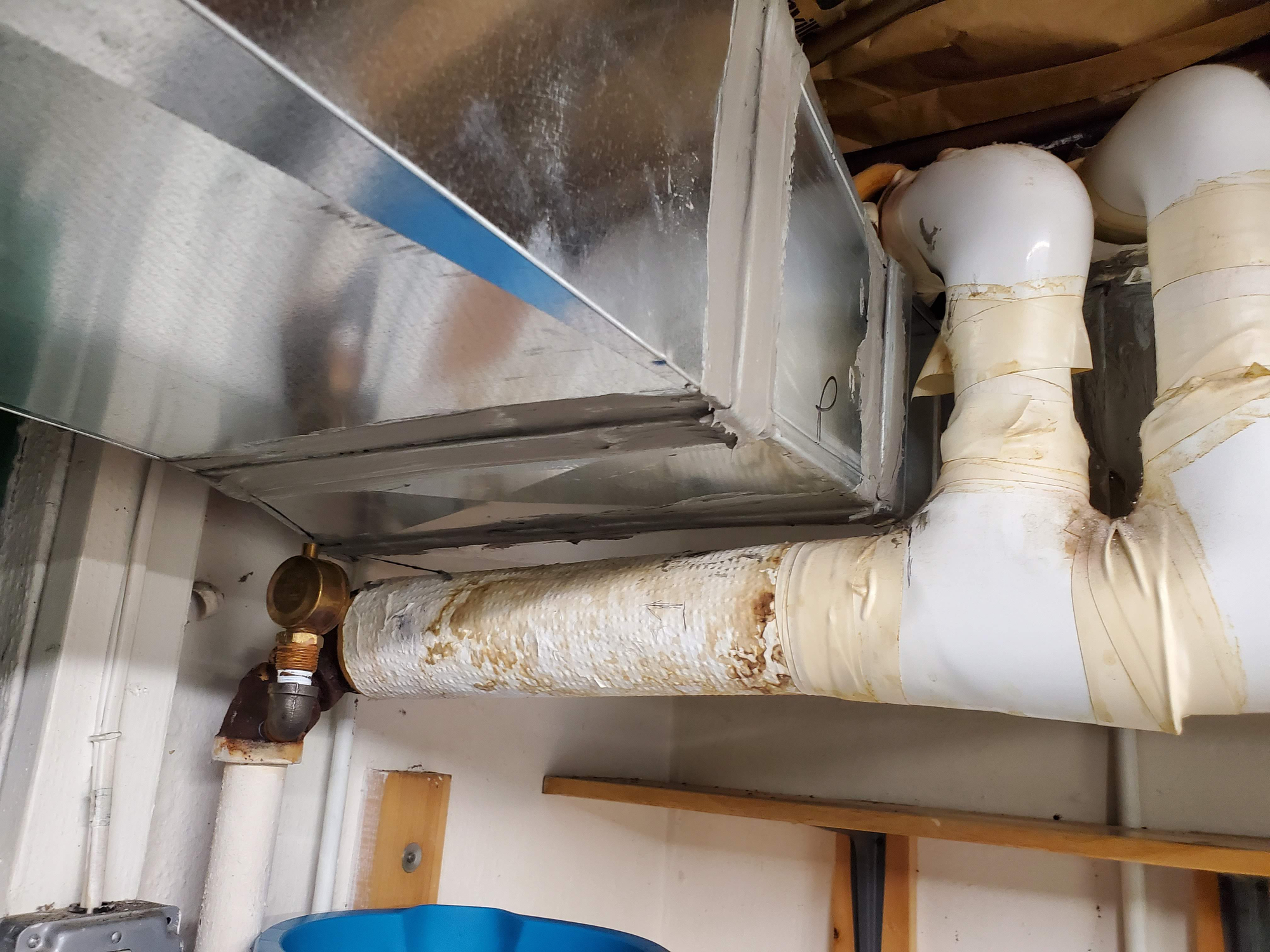 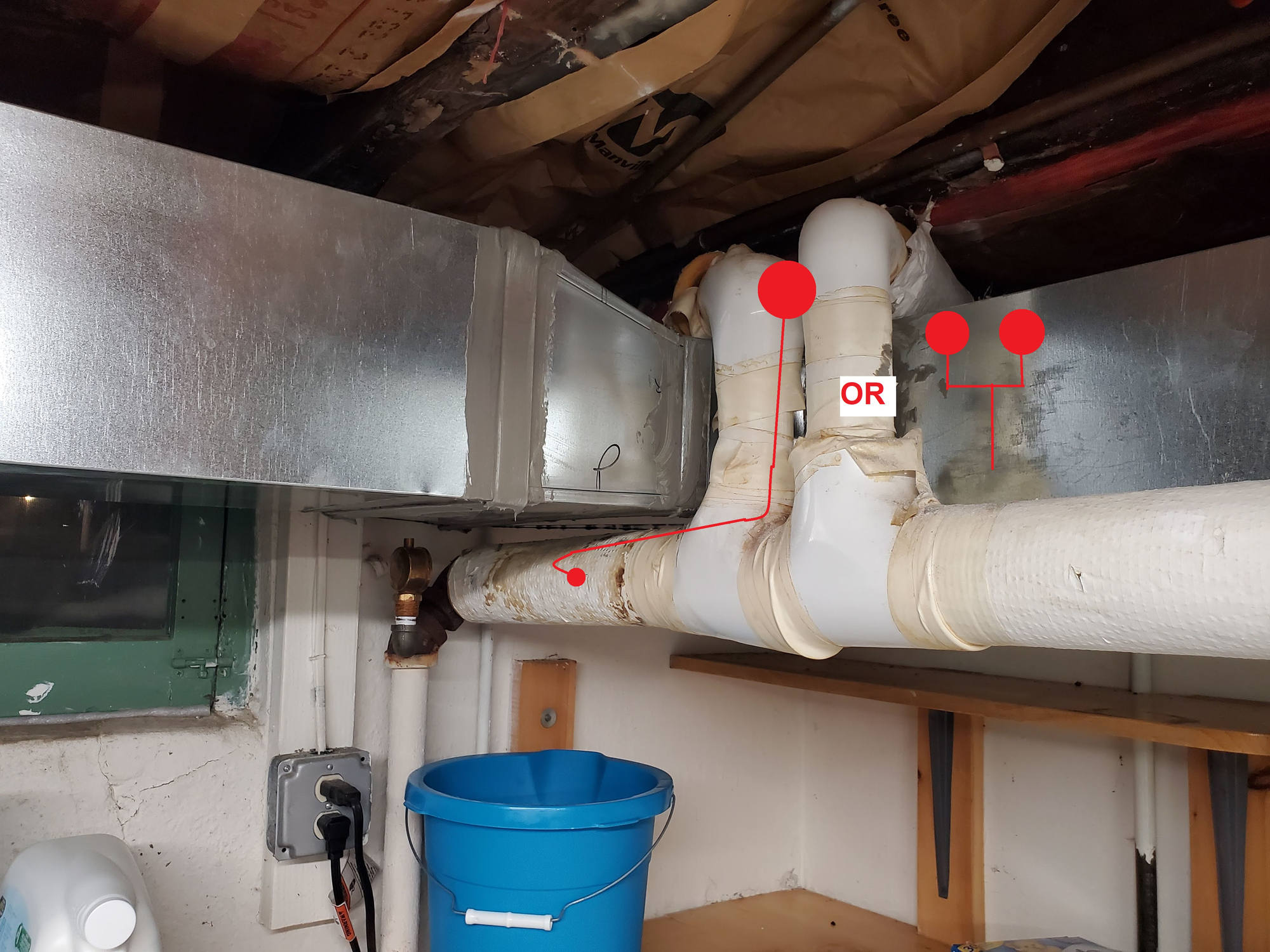 The shorter main (about 40-ft of 2" pipe) also has its final takeoff shortly before the return drop, so I cannot come back the recommended 12" from the drop for my vent. I am thinking of tapping either the side or top of the main a couple of inches past the takeoff, and assuming a 1/2" tap with a single Gorton #2 for this main. Or maybe I can stick with the single #1 I've got on there. Thoughts? 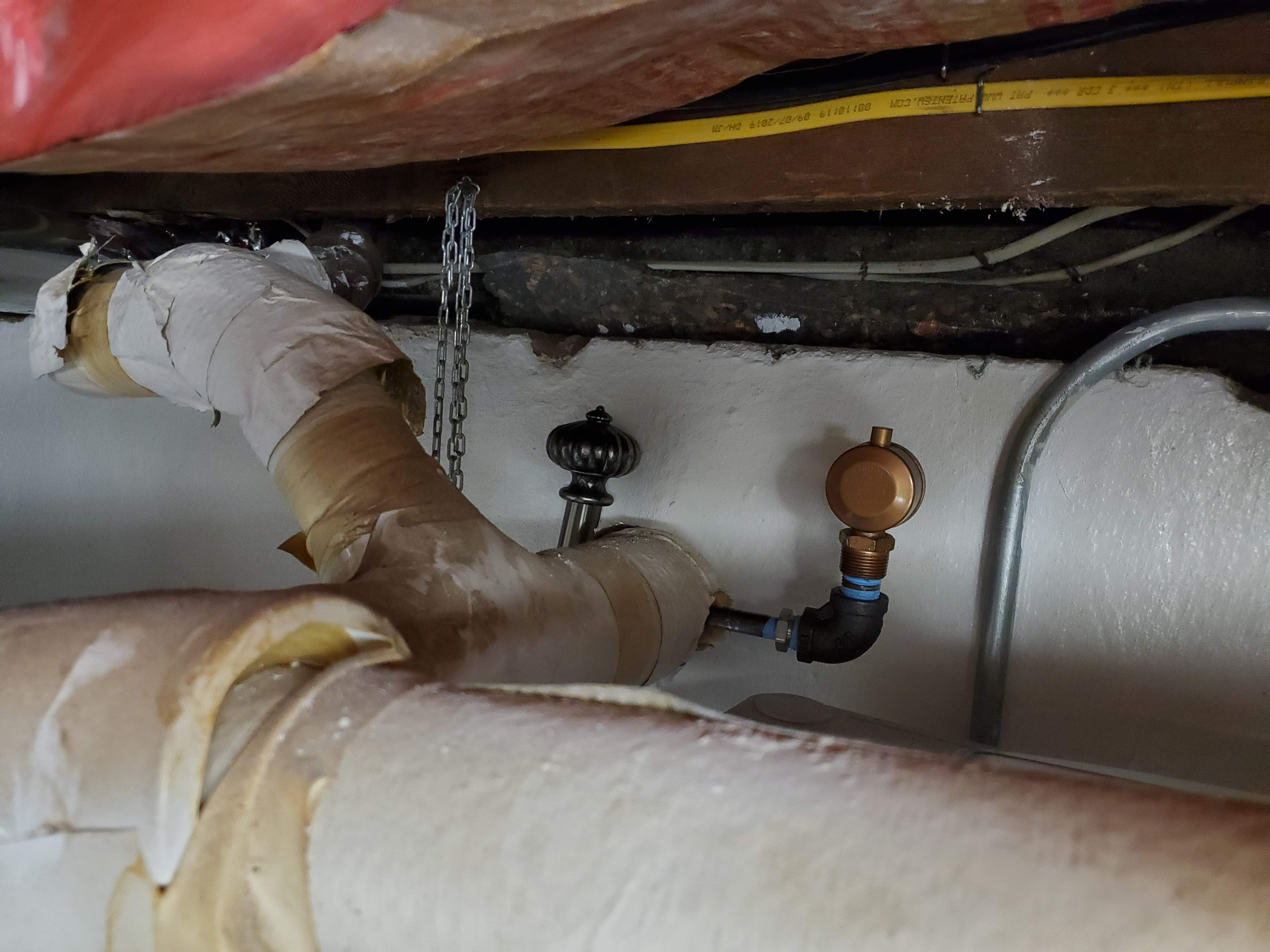 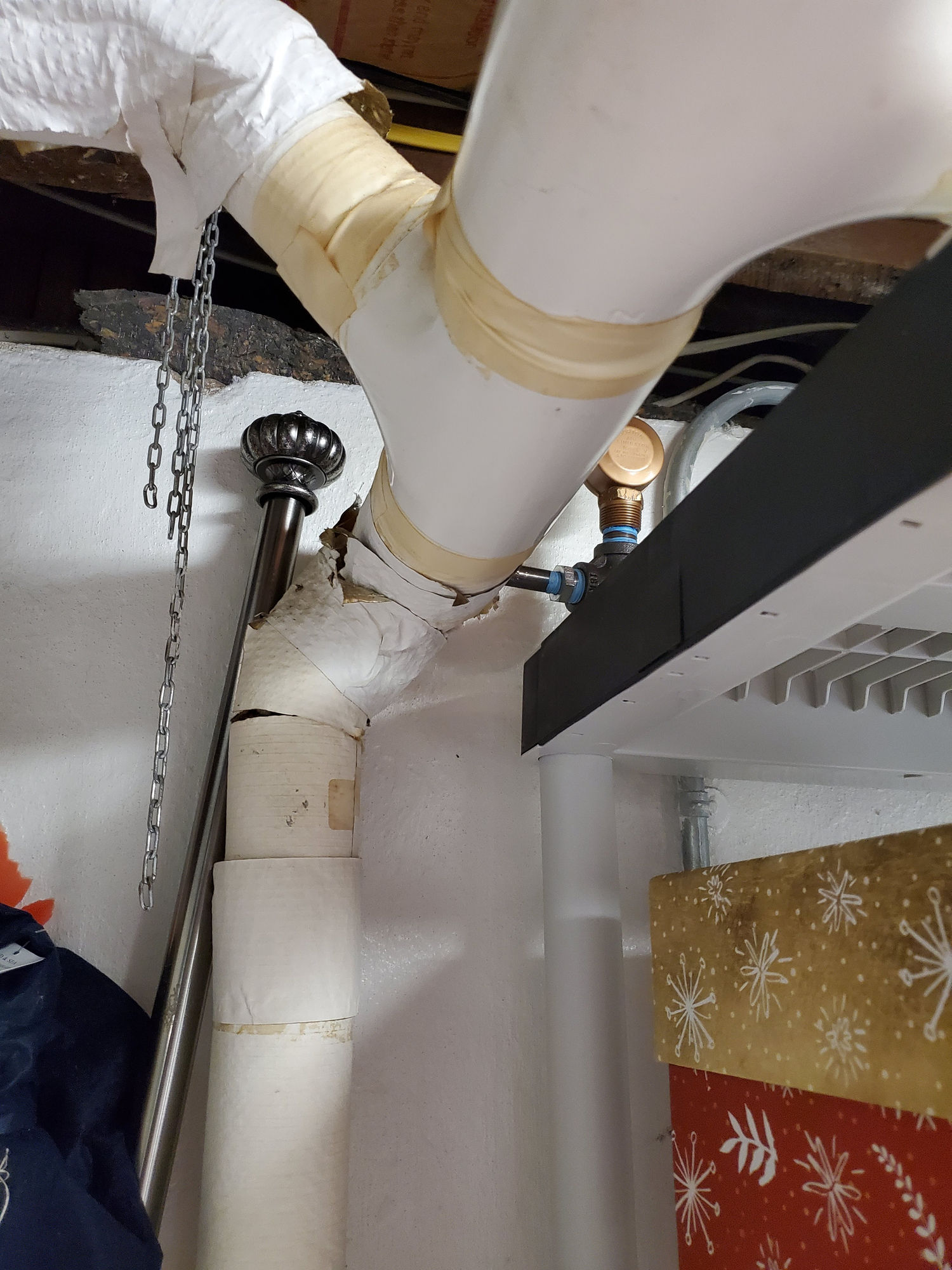 5. Radiator pitch. I was able to pitch most of the radiators back toward the pipe ever so slightly with minor shimming. However, two radiators on the third floor were moved away from the wall to accommodate the cooling ductwork now running around the third floor perimeter. The plumber who did this work replaced the old 90-degree valves with elbows, nippled out to the new radiator location, and installed straight valves before the radiators. I don't see an issue with this arrangement per se, but the new elbow at the top of both risers seems to be 'aimed down' very slightly rather than exiting horizontally, if that makes sense. the additional length added by the nipples exacerbates the low point and resulting condensate trap at/near the straight valves. I tried shimming both radiators up enough to correct the pitch, but it doesn't seem possible. I actually cracked the threads on one of the straight valves and found out the hard way after cupping a bit of my wood floor below the valve. The silver lining is that I now know how to replace a radiator valve and spud! Anyway, how critical is radiator pitch? If these two radiators on my third floor just cannot be pitched properly but they still heat, albeit with some noise, is it the end of the world? Or is there another solution? 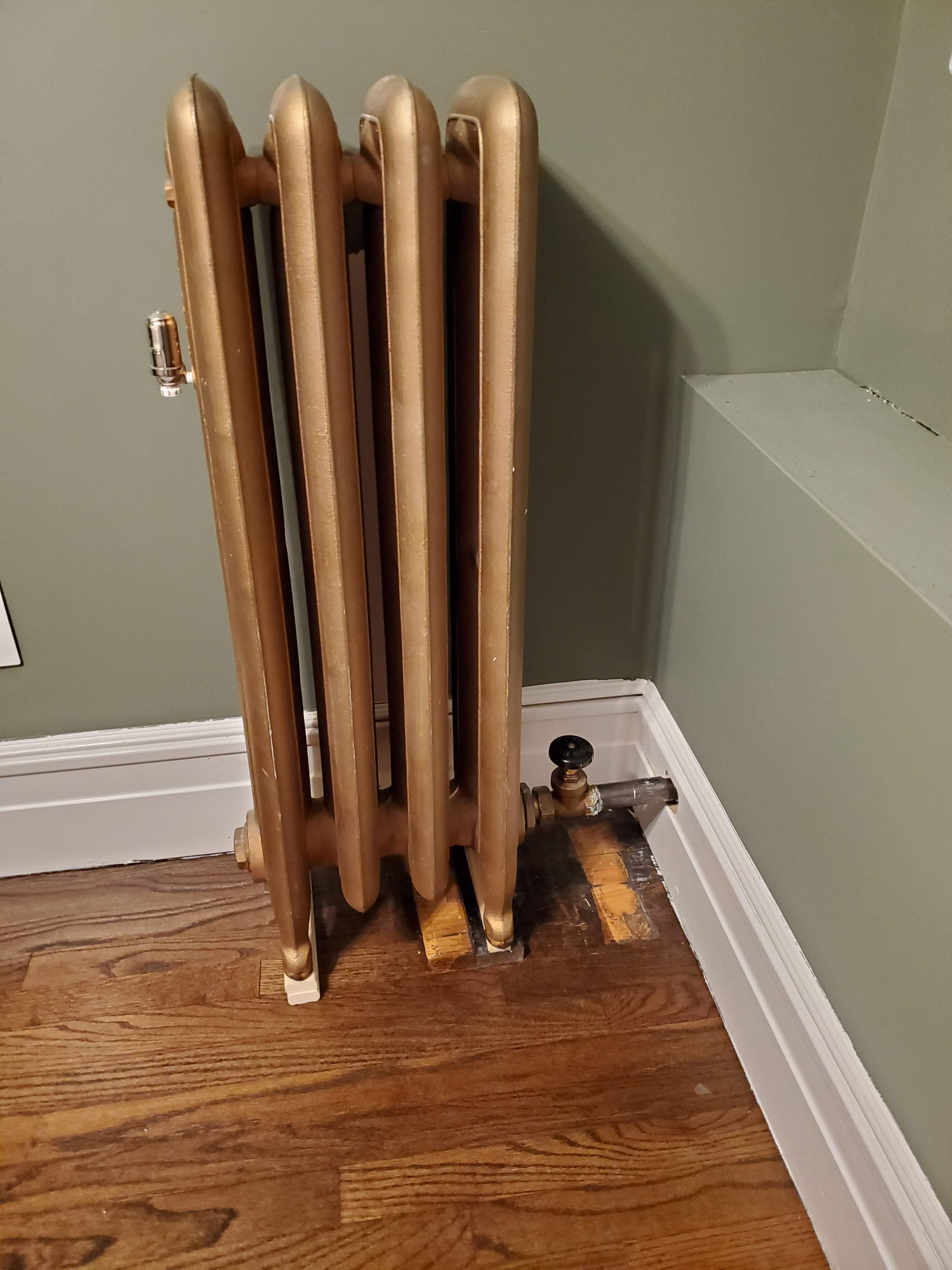 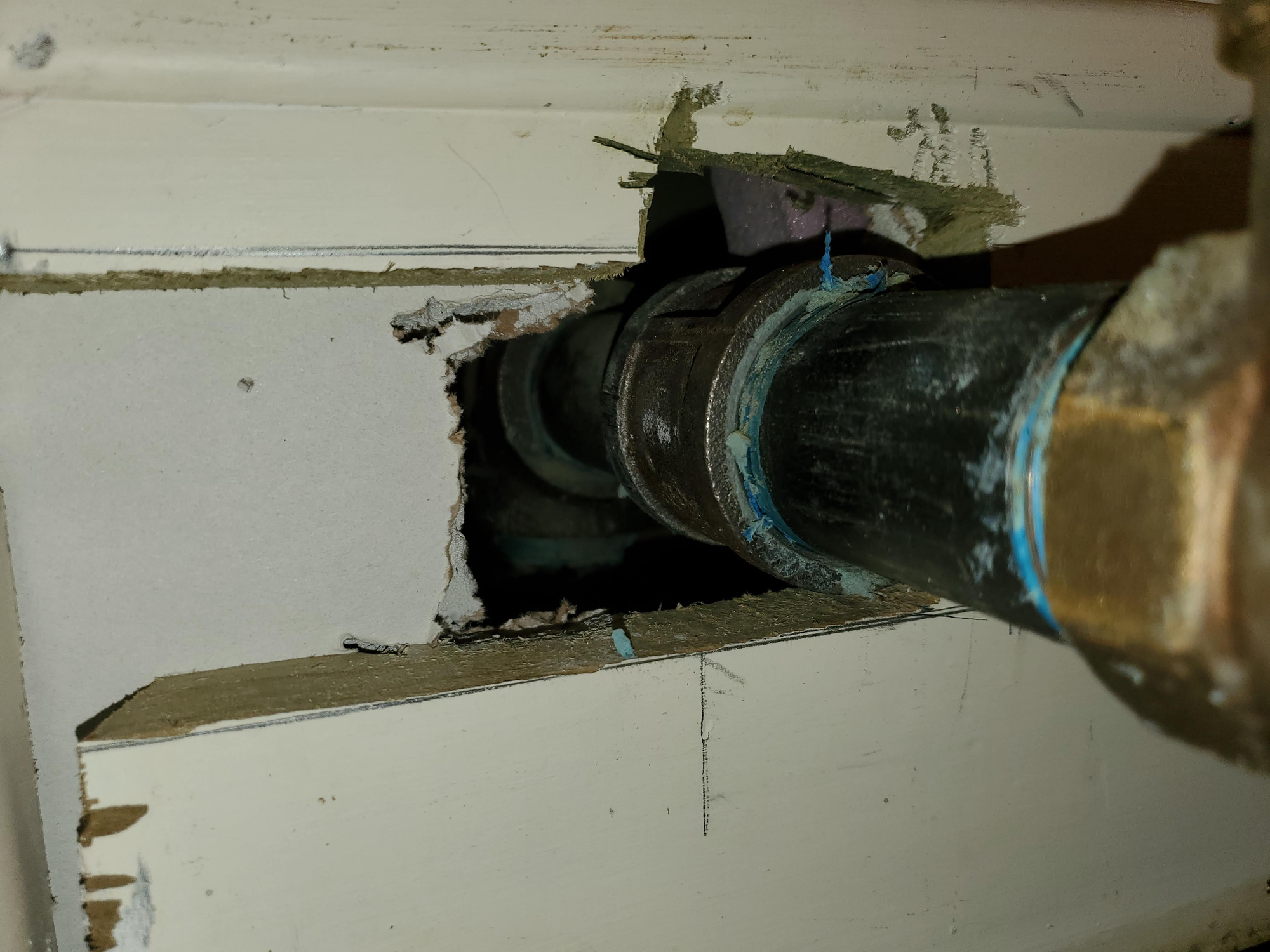 So I think that's all I've got for now. Apologies again for the novel, and thanks in advance for any input. Cheers!
0