One year NG utilization for TriAngle Tube and Viessmann boilers: 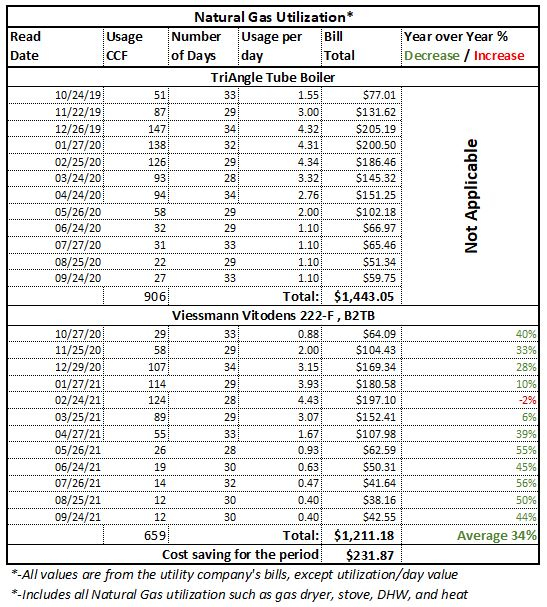 Is there a lot of savings of NG? Yes, around 34% on average, that resulted about the same percentage of CO2 reduction as well. It would be hard not to like these reductions...

Is the saving of 231.87 bucks in a year a lot? You decide... Just keep in mind, that the yearly maintenance cost for the Viessmann probably will be more than that. The yearly maintenance cost for the TriAngle boiler, that lasted 20 years, was around 800 bucks if that. Will the Viessmann last for 20 years? That remains to be seen and I have my doubts about that.

On the other hand, I should have researched and compared the different type of boilers, instead of the installers selling "snake-oil". Even it is hard for a layman person, like me, when it comes to boilers. This falls under the category of "live and learn..." and I did by now.

I do like my new boiler that provides even temperature during the heating season, unlimited hot water and does it quietly. Maybe other brands would had provided the same for less, but I liked the 222-F with its 20 gallons hot water tank. There's really no ROI for boilers and the installation cost difference had not been that much between boilers.