Help with a new (to me!) oil fired steam system

merikus Member Posts: 42
September 2020 in THE MAIN WALL
Hello everyone!

I purchased a beautiful old house yesterday that came with a beautiful old oil fired steam heating system. When our offer was accepted on the home, I immediately purchased “We Got Steam Heat!”, “Greening Steam”, and “The Lost Art of Steam Heating Revisited.” I wanted to make sure I was ready to care for this house and this system. The only thing I’ve been able to figure out myself so far is these pipes really need insulation! But there are a few things that are really odd to me here. I hope you all will be able to help me with one of more of these questions.
My first question is regarding what seems to be short cycling of my boiler during what is effectively summer weather here right now. Every few hours, I hear the boiler cycle on for approximately 60 seconds before it cycles off. Of course the initial thought would be that this is warming our DHW, but we have an electric DHW tank. This tank is linked to the boiler, and what the previous owner told me was I should toggle a switch (photo attached) to turn on a pump to allow the water to circulate from the boiler to the HW tank in the winter months to save on electricity. 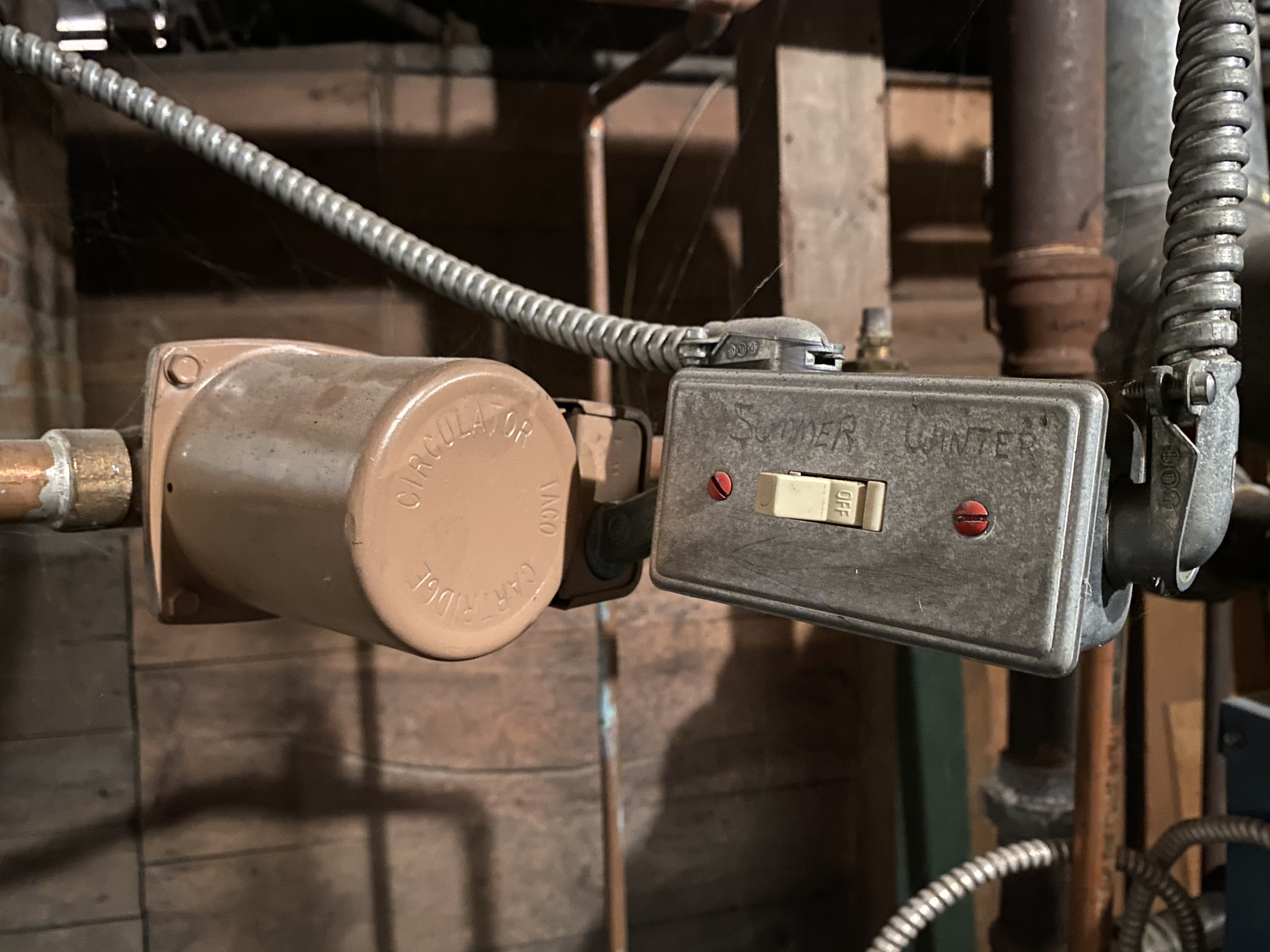 My theory (but I really don’t know what I’m talking about here!) is that the DHW tank’s call for heat is somehow linked to the boiler—and it’s own internal electric system. So the tank calls heat, that fires up the boiler, also fires the internal electric system, it reaches temperature very quickly and the call shuts off, thus cycling the boiler in about a minute.
I think that is supported by the photo below. The “Summer/Winter” switch appears to be wired to the thermostat for the hot water tank, which is in turn wired to the controller for the oil burner. I would think this summer/winter switch would kill that connection somehow, as it is between the DHW thermostat and the oil controller. But clearly I’m wrong here since the boiler is turning on for no reason and something odd is going on here! Here’s the wiring of that system which I think supports my hypothesis, but I don’t know what to do about it: 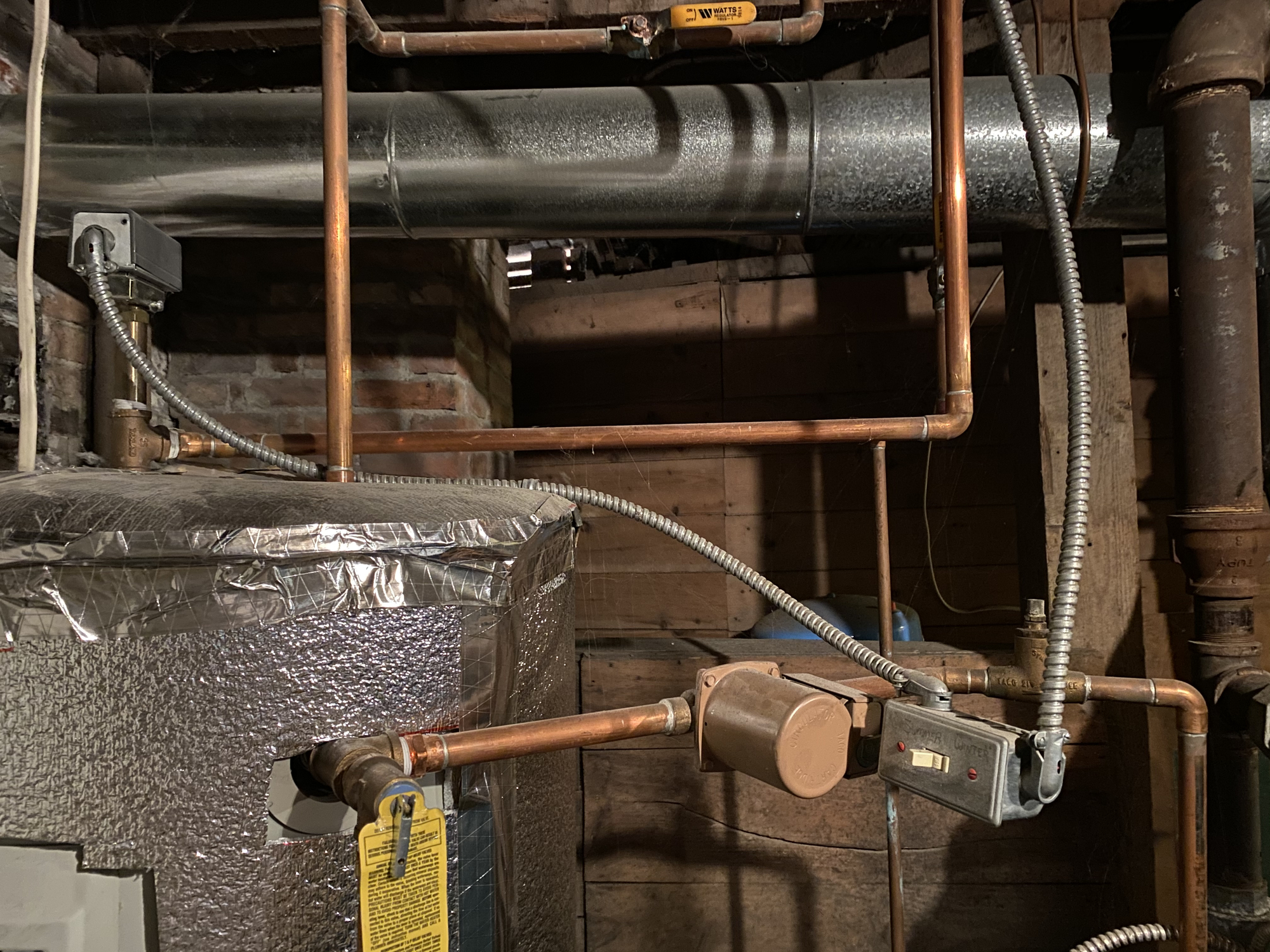 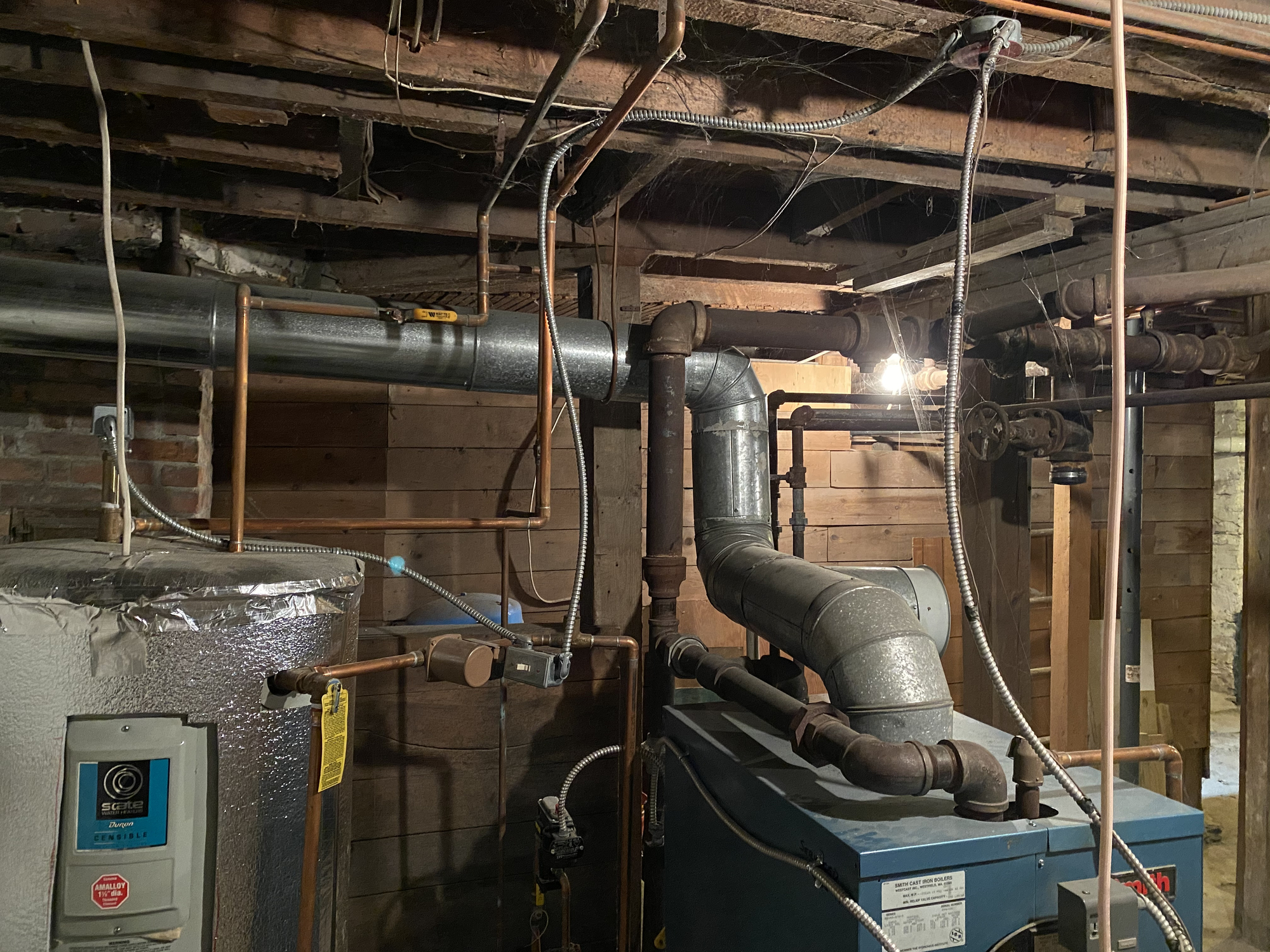 My second question is regarding the overall setup of the system. When I look at the radiators it appears to be a one pipe system, but when I then look at the piping in the basement it almost has qualities of a two pipe system! I’ve attached a picture as an example. Off the riser I have three main steam runs going north, south, and east. At the end of each of these runs where the pipe should elbow up, there is instead a T and the T goes (on one side) up to the radiator and (on the other side) down to a smaller pipe that heads to the return. (I’ve pictured the east run, which will make sense why in the sentence after the photo.) 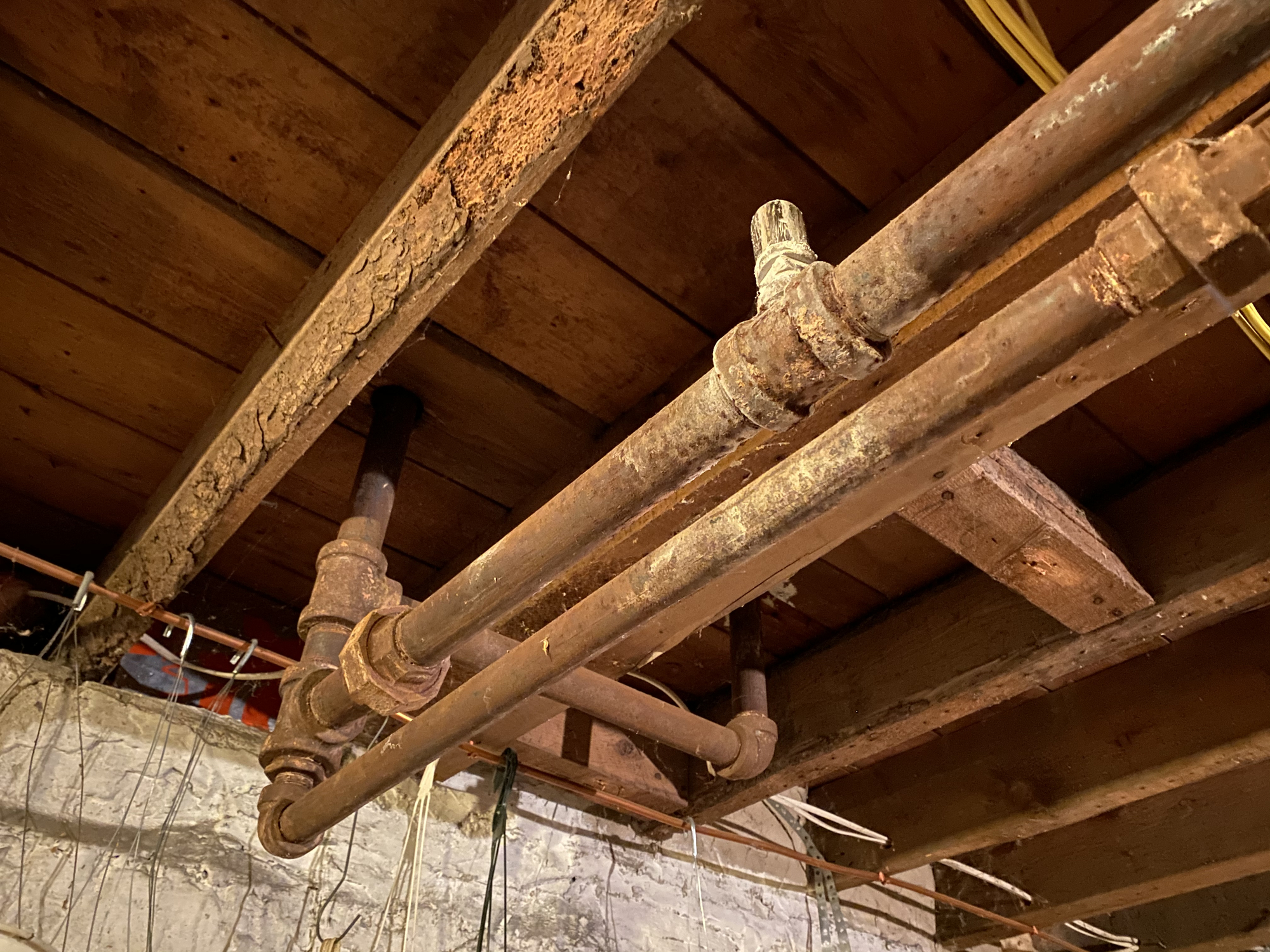 This east run photo here is the only one that has a vent on the steam pipe itself—none of the other steam runs do. However, I have vents on all three of these small return pipes. 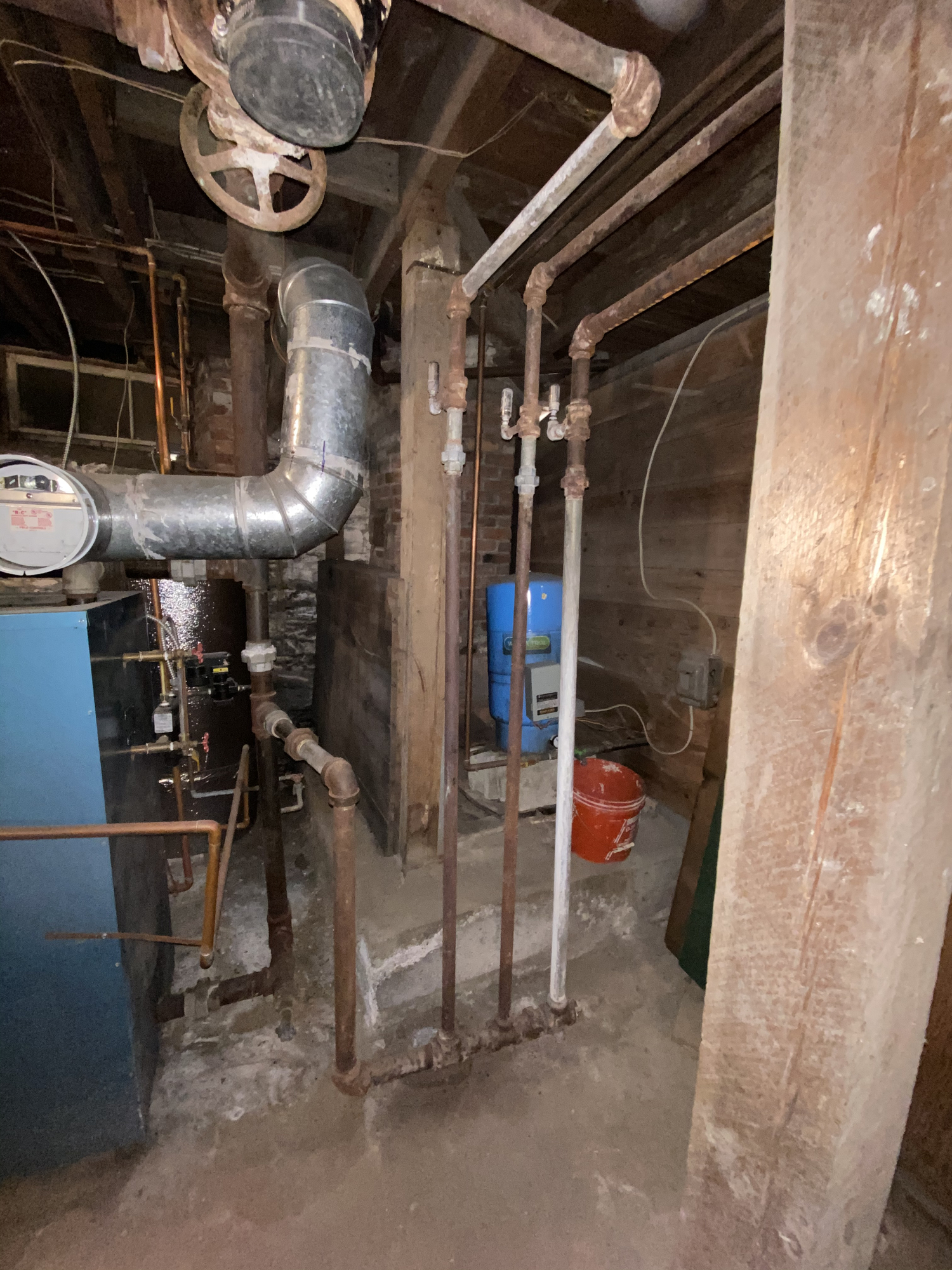 They are all also covered in white gunk, as is the main vent at the end of the east run. Is this even the right kind of vent, and are they properly placed? 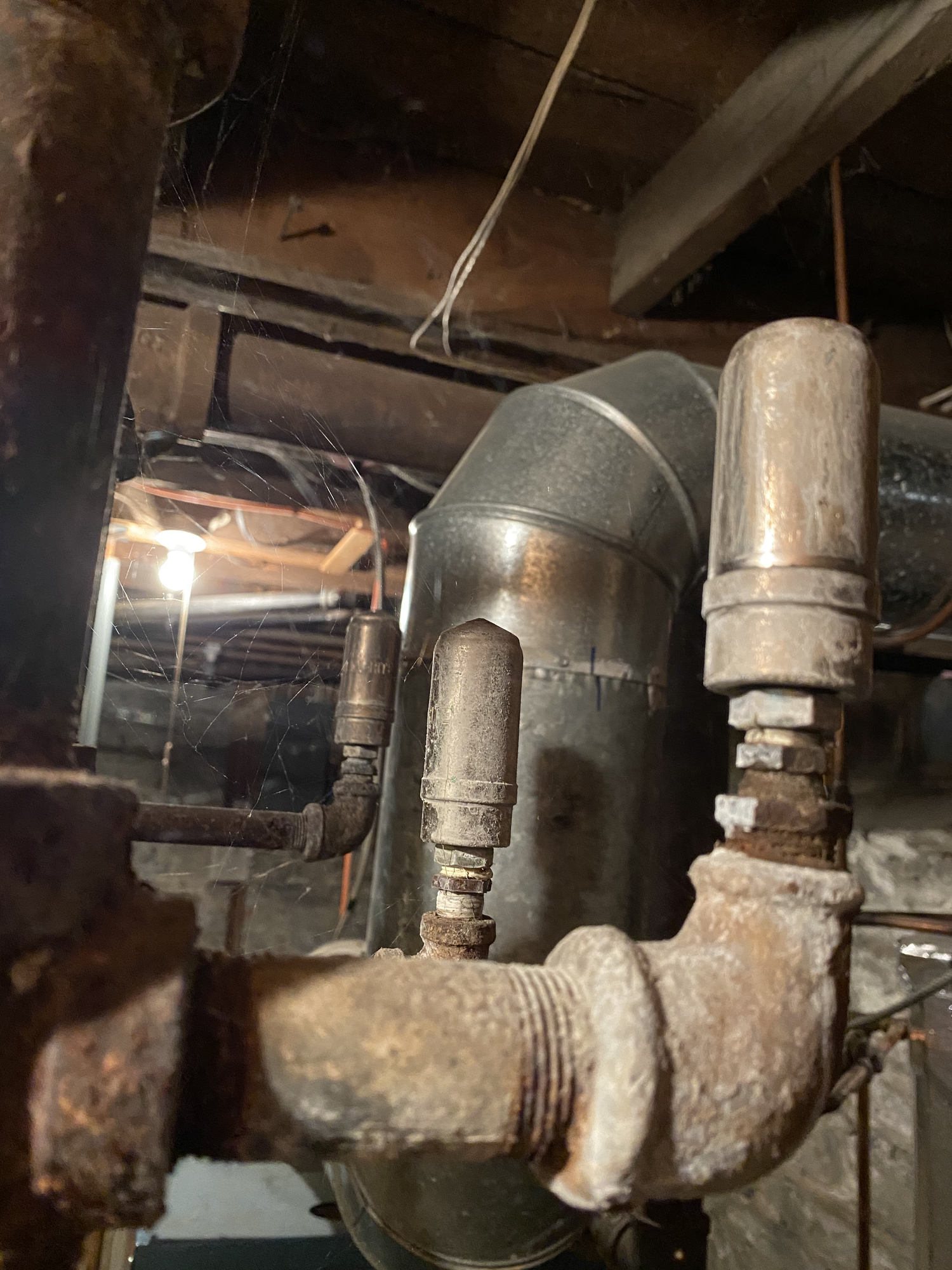 Even odder is whatever is going on at the end of the south run which makes no sense to me (pictured—what’s up with that loop?). 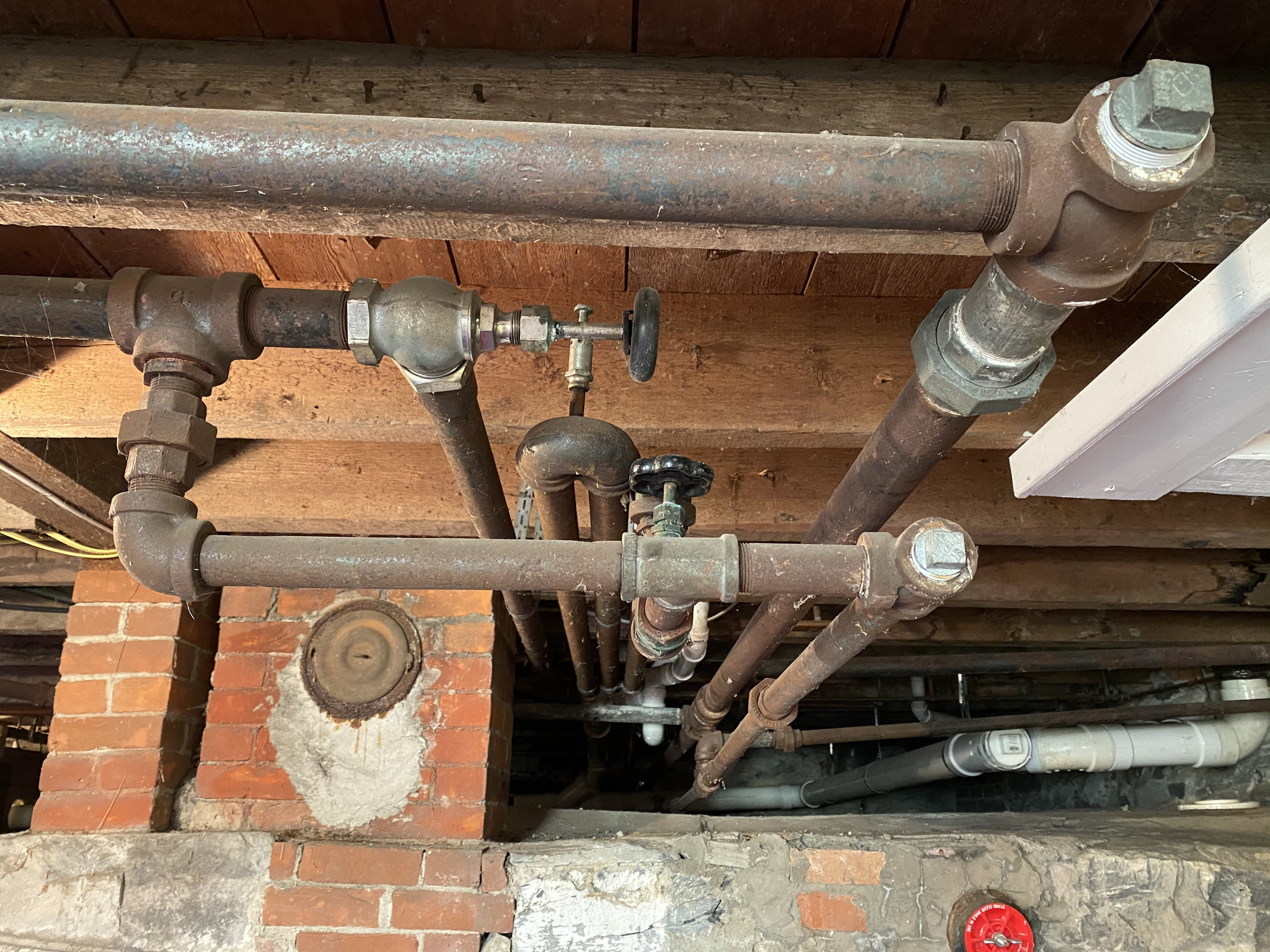 I’m also trying to figure out what all these things are on my boiler. 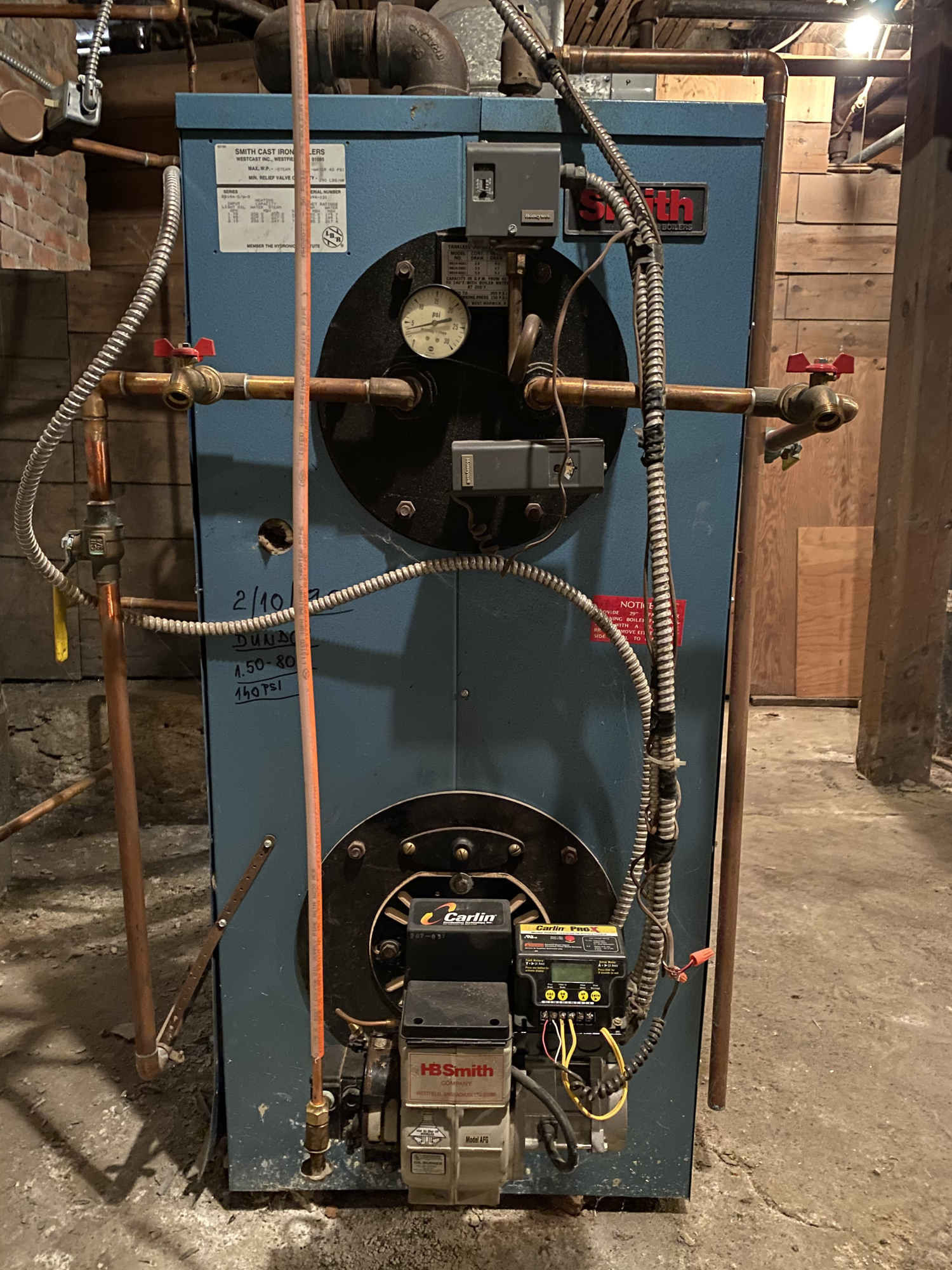 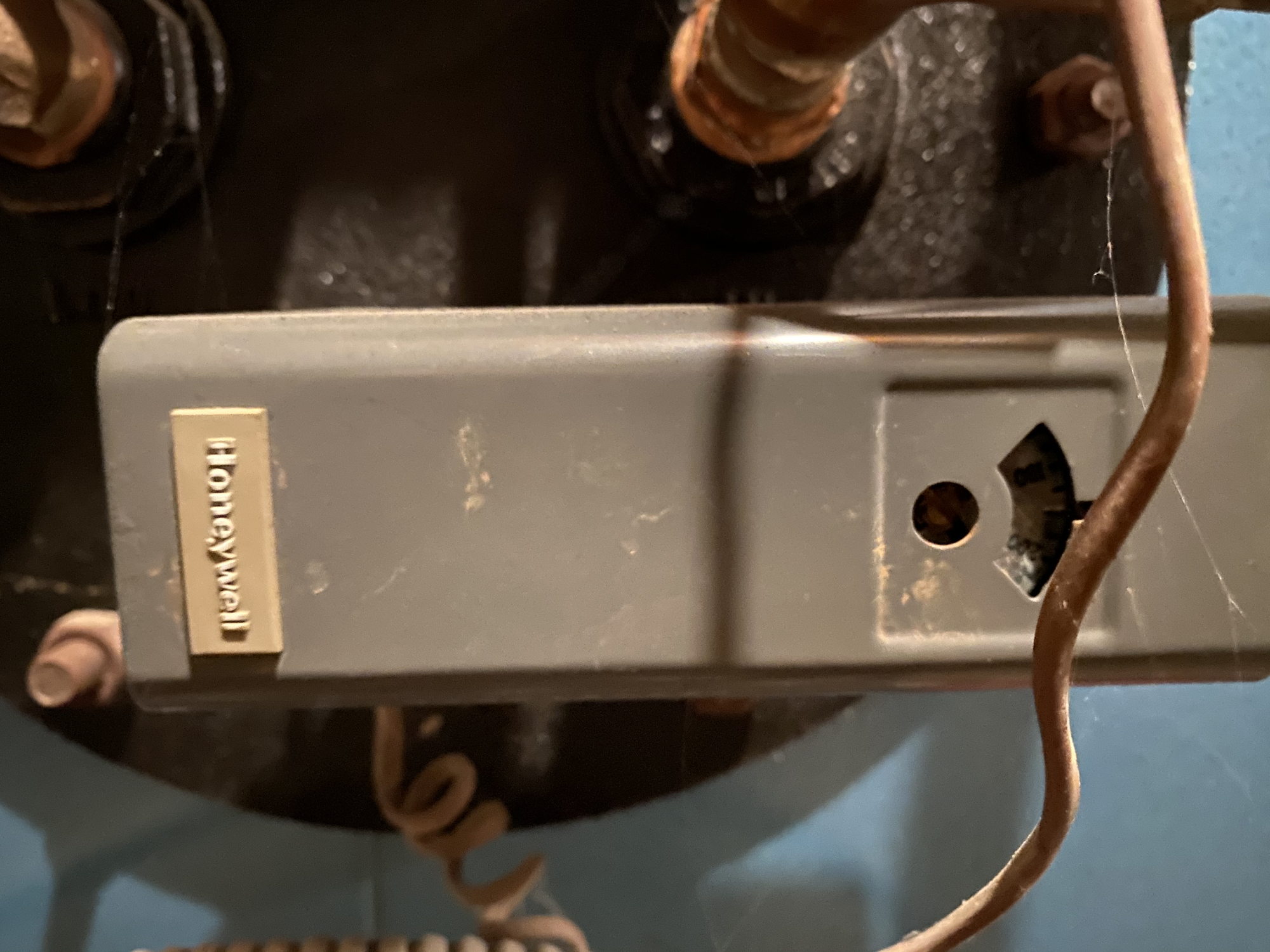 I think it has something to do with my thermostat (the brown wire leading off of it connects to the main oil controller and to a brown wire headed in to the my house, and my guess is that it’s the thermostat). But why does it have a dial, and why is that dial set to about 190?

On the bottom is the burner controller I think. 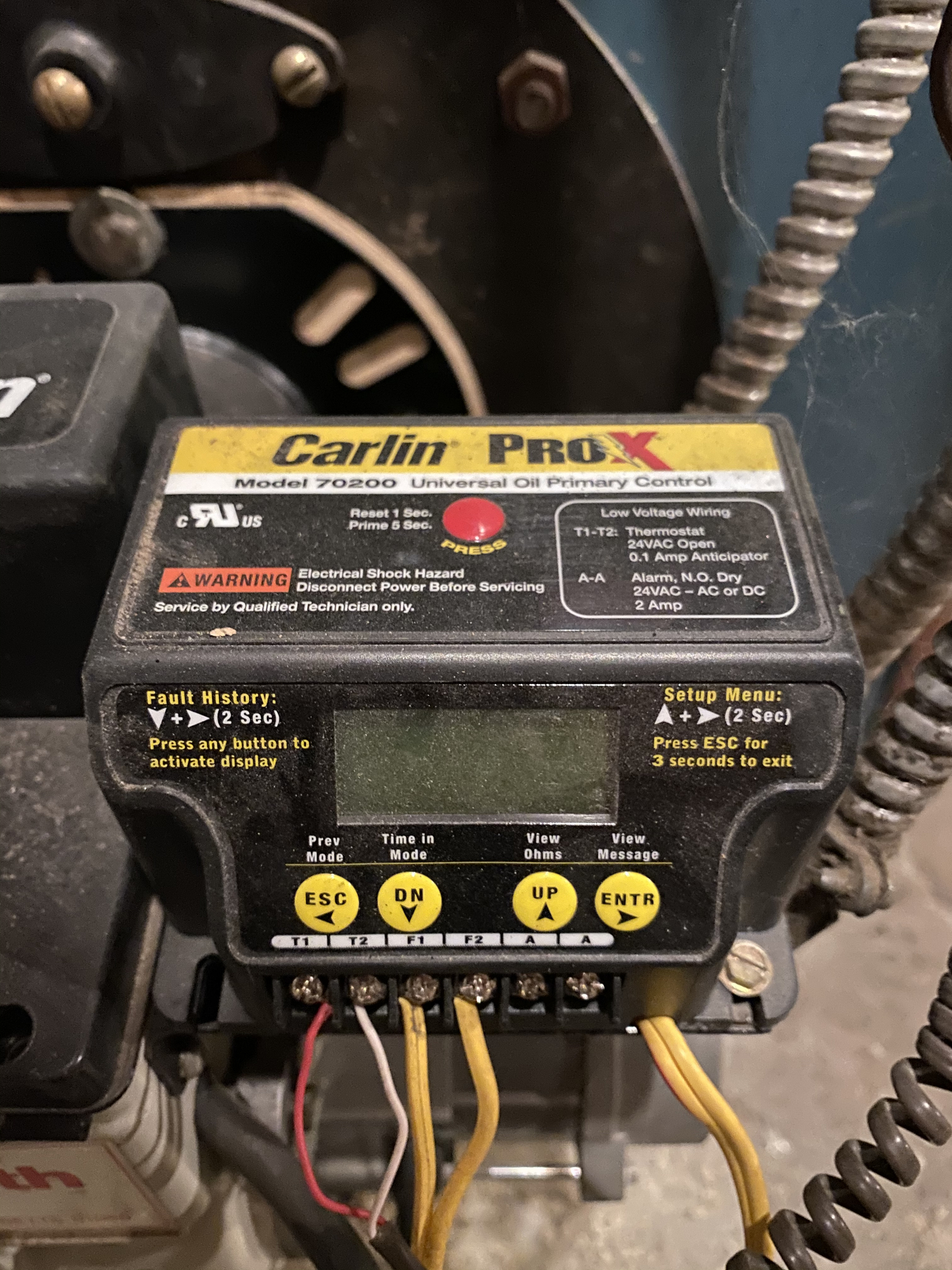 Is there a way to set this so it ignores the hot water call during the summer? Also, any way to run a C wire off this thing so I can install an Ecobee thermostat?
My next question is far less of a big deal than the other ones, but all of my radiators have these marble tops. The previous owner said he put them in because it “keeps the air from going up” (we have 10 foot ceilings!), but my thinking is that all they’re doing is messing up convection. I’m thinking of taking them off. Thoughts? 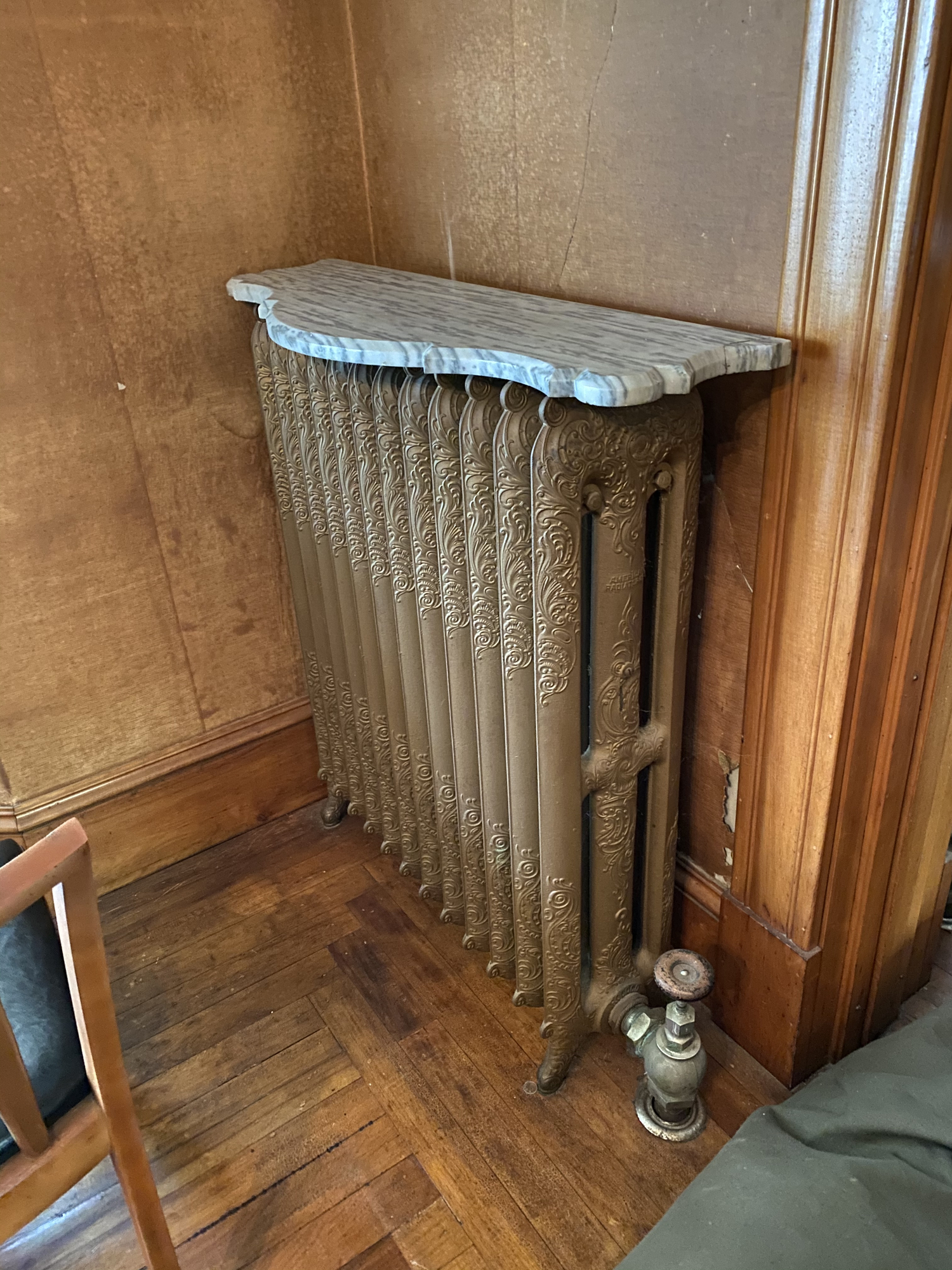 Finally, how do you find someone who really understands this stuff? The guy who has worked on the boiler forever (he installed the thing)—I can’t tell if he understands steam or not. I’m worried that this boiler has been short cycling for years due to this DHW issue and hasn’t been addressed—also worried that the main vents seem sort of odd and that hasn’t been addressed. Are there questions I could ask to sort of gauge if he’s a steam guy? And if not, how do you find a real steam guy?