Can undersized boiler work in a vapor/vacuum system?

vapor1 Member Posts: 24
April 2020 edited April 2020 in Strictly Steam
@PMJ
To PMJ
I read many of your posts as you suggested, and I'm really interested in your control system. However, our system has about 947 sq ft installed EDR vs 760 sq ft on the boiler tag. The house heats OK, but with variations room to room. The gauge on the boiler never sees over 1/2 psi even after a 2 hr burn (recovery). Except for the low water cut off, thermostat is in complete control. The main problem is that 3" to 4" of water exits the boiler from a cold start. It returns after the burner cuts off, but I figure it has to travel through about 180' of steam mains, and the level isn't fully restored for about 12 hours. This means we have to start with the level pretty high, about 1" from the top of the glass, which probably contributes to the water loss. The header arrangement is probably the biggest culprit - I'll attach pictures.

My plan is to have the header arrangement fixed. (The boiler is ~25 years old so I'm not sure the investment will have much time to pay off.) And I'd like to add back the stainless ball in the Webster 0023 vent trap - if I can find one. Then wouldn't we have a vacuum system? I don't know if it would improve efficiency, but it would stop the inrush of air through the vent on shut down. All that air can't be a good thing. Do you think it would make sense to make these changes, and should I consider your control system, either with a PLC or with just the sensors and timer? 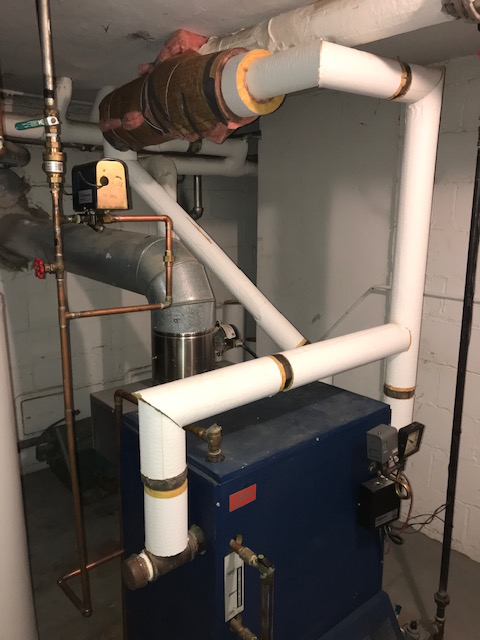