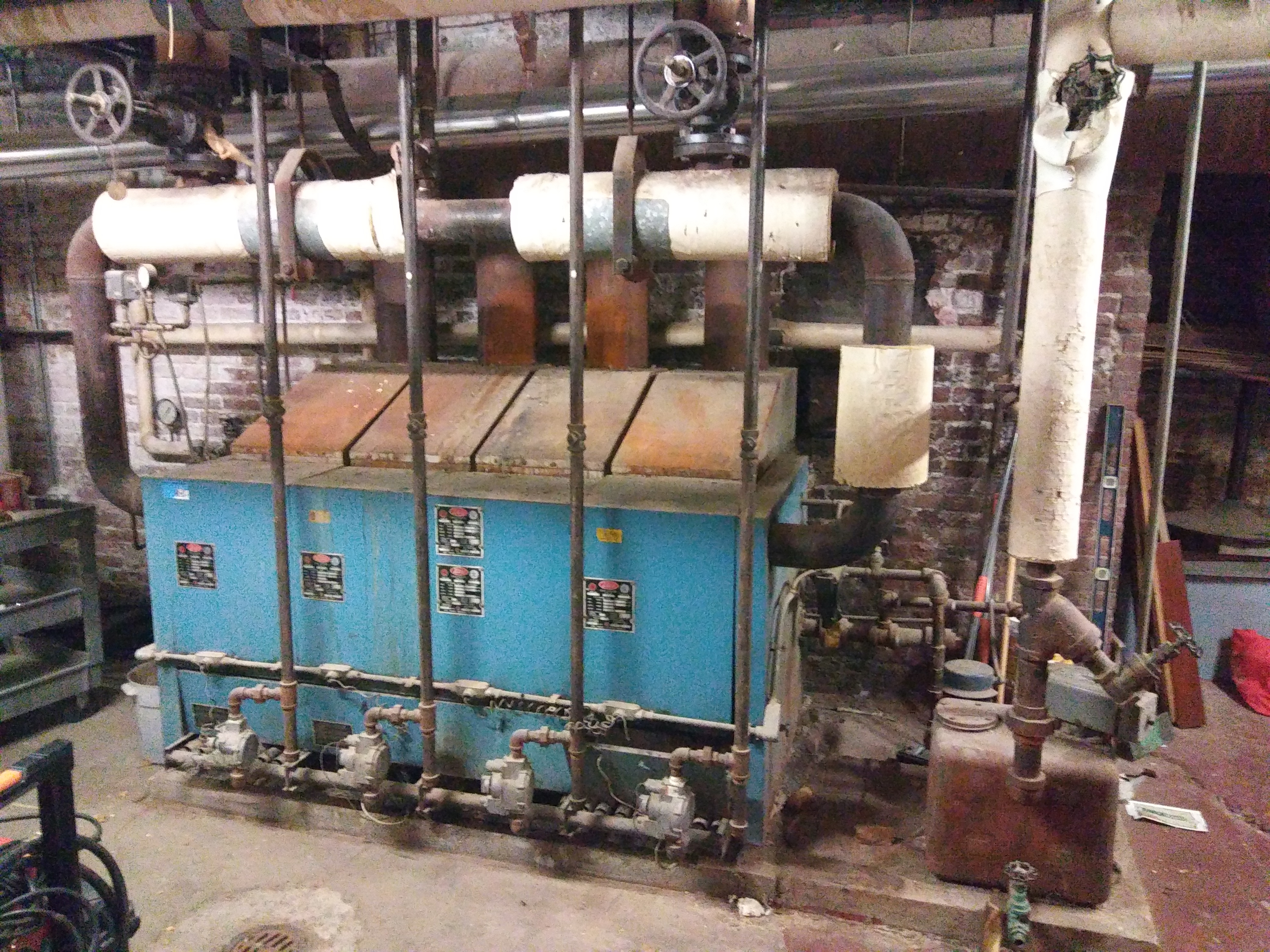 This week I'm going to be replacing a boiler in a commercial property that has cut the system size down by 80% from what it was when the current boiler was installed.
The boiler that's there now was once a 1.6 million btu boiler, (4) 400000 BTU Utica boilers pinned together. As of now only 1 of the 4 boilers is working.
It use to serve the entire 5 story building, but now only heats (5)recess fan coil's, (6) 1-1/4" fin tube baseboard heaters and 2 air handlers with steam coils. The building went through major renovations Back in the early 90's,
When they cut the steam heat out of the top 4 floors to give the new office space A.C., they left the boiler to heat the stairwells, common areas and the restaurant that was not willing to pay to replace their heating equipment.
So now it's my job to make what's left of this system work right.
I could wright a long thread just talking about everything that's wrong with the system, but that would be a wast of time because its all getting replaced.
I'm going to install a EG-75 to cover the 900 EDR system size I calculated.
I want to stage the burner because there are motorized zone valves on the 2 air handlers and TRV's on all the baseboard heaters. With the zone valves closed, it reduces my EDR by 30%.
If I had more room in the budget, I would install 2 boilers and 4 stages.
You can't always get what you want.

What would be a good 2 stage gas valve for this boiler?

I'm planning on using a condensate pump to put the water back in the boiler. I want to use a boiler feed pump, only the smallest one I can find comes with a 50 gallon storage tank.
I think that's to big seeing how the EG-75 only holds 17 gallons in the block and the smallest condensate pump I could get has a 6 gallon tank. If the boiler is burning 300,000 BTU'S, it would be losing .60 gpm. To size a condensate pump tank, it's supposed to be 3 times the condensing rate of the boiler. The 6 gallon tank is oversized. I would much rather use a boiler feed pump to have the communication between the boiler and the pump. The 50 gallon tank would be cooling the condensate and dumping cold water into my boiler every time it came on.
This is my first pumped return so I'm unsure of all my options.

Are there smaller boiler feed systems that I'm not finding?

I'm making this into a mechanical vacuum system, so I know ill need a flow check and water seal on the condensate tank's open air vent. Also a vacuum equalizer between the supply and return to ensure that the vacuum level on the supply side is never greater than the vacuum in the return piping.

I'm going to replace the steam traps on all the radiators and the F&T'S on the 2 air handlers.
Building management told me they've never been serviced.

At the end of the steam mains they used #15 F&T'S. Look like they cut out loop seals and cheaply welded the traps in. Other then saving space, is there a benefit of using a F&T rather then a loop seal?

For a temperature control I'm going to be using a tekmar 279. system serves so many random places in the building. it's difficult to choose where I should place the indoor temperature sensor. I called tekmar text support to ask how I can wire the control to sense several readings. They told me by daisy chaining the resistors the control will average them out.

Not sure if maintaining an average in this manner is a good idea. I think that would make one area averagely overheated and another area averagely under heated. Thoughts?

As for the system sensors, my question for tekmar was " in a steam system where the steam mains will travel hundreds of feet in opposite directions, how do I decide which end of Main line gets the sensor? Do I put a sensor at the end of every Main?". He said nobody's ever asked them that before and it's never come up and any meeting he's attended. He did say that the control wood average those temperatures as well and I could adjust the parameters until I was happy with the results.
I figured I was going to be doing that anyways.
Here I think daisy chaining sensors to see an average won't hurt. If the sensors are placed on the return line of the farthest radiators and its purpose is to sense return condensate temperatures, then if one gets hot before the other the cold sensor should keep the control in check. Again thoughts, experience?