scottrice31 Member Posts: 7
May 18 in Strictly Steam
I am trying to get a 1923 Dunham Vapor Heating System to function the way it was intended. My understanding is that this system will work best at ultra low pressure. The boiler is now a 2003 Dunkirk 247D-400S with a Honeywell 4079A PressureTrol and a PA404A Pressuretrol safety controller. The system has a Dunham 220B air eliminator. Most of the traps are CA Dunham 1 series, some with cartridges that look like they have been around forever. There is at least one end of line Hoffman 17C cartridge between the steam side and the dry condensate. Additionally, a number of the radiators on the 3rd floor that have vents. I believe that I need to do the following:

1) Replace the 4079A Pressuretrol with a Vaporstat
2) Replace the pressure gauge which is measuring 0-30 pounds, with something in ounces
3) Replace all the trap cartridges.
4) Remove and plug radiator air vents
5) Do something about the Air Eliminator. It looks like a combination of a F&T Trap plus air vent.
a) Is there a company that does rebuilds of these things?
b) If not, do I replace with an F&T Trap with an air vent on the outlet side?
6) Some illustrations (diagram below) showed a boiler return trap with an air outlet to the dry condensate. Is this needed?
7) Some illustrations also showed a swing check valve on the wet condensate in the first horizontal run below the air eliminator wet outlet. Is this needed?

Is this the right plan? Am I missing anything?

Thank you for your help! 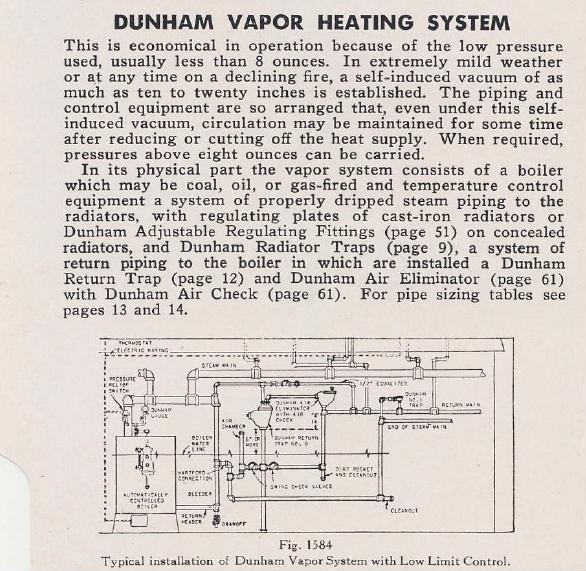