CaptSkinny Member Posts: 4
October 2017 in Strictly Steam
I have a one-pipe steam radiator that never quite heats up. Soon after steam makes its way to the radiator, the vent gets wet and closes. If I remove the vent the radiator heats as it should. If I blow out the water and replace it, or swap it out with a dry one, it vents air for a few minutes until it gets wet again and closes. The vent is a Heat-Timer Varivalve quick vent, though I've swapped it out with other vents without success. Adjusting the vent rate in either direction doesn't help, either. The problem only occurs with one other radiator, on a different main, but even then it only happens once or twice a year.

When I took the radiator off to inspect it and flush out any gunk I noticed a pool of standing water at the bottom. It was held back from draining due to an inward lip on the spud, and I had to tip the radiator up nearly 30 degrees before the one-third cup of water or so would drain from it. See picture: 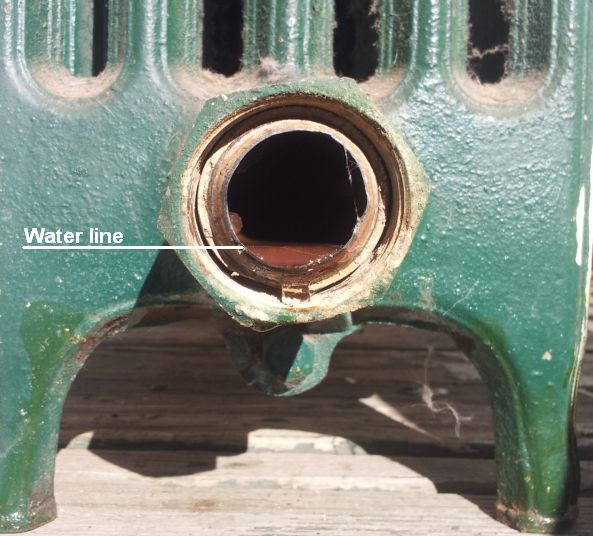 Is the standing water in the radiator likely causing the vents to get wet and close, or otherwise problematic? If so, can I just file off the lip on the spud? It looks like there is enough material to maintain a proper seal with the valve after I file a bit off.
0 · Share on Google+