rsilverst Member Posts: 10
October 2022 edited October 2022 in Thermostats and Controls
Hi there -- I have a 2 wire gas-fueled steam boiler (single pipe system) made by Burnham. We'd been using a digital thermostat (White-Rodgers) to control it, and have always thought it's ugly -- we wanted to get an "old school" knob thermostat to fit the style of our home (built in the 1920s). Hence, the "downgrade" from digital to analog.

Here's my situation:
For this Honeywell thermostat, there are some toggle switches on the back of it that are used to set the cycle rate, depending on whether it's a steam or air system. We set the switches to the steam setting (see image below - we used ON/ON for steam system). 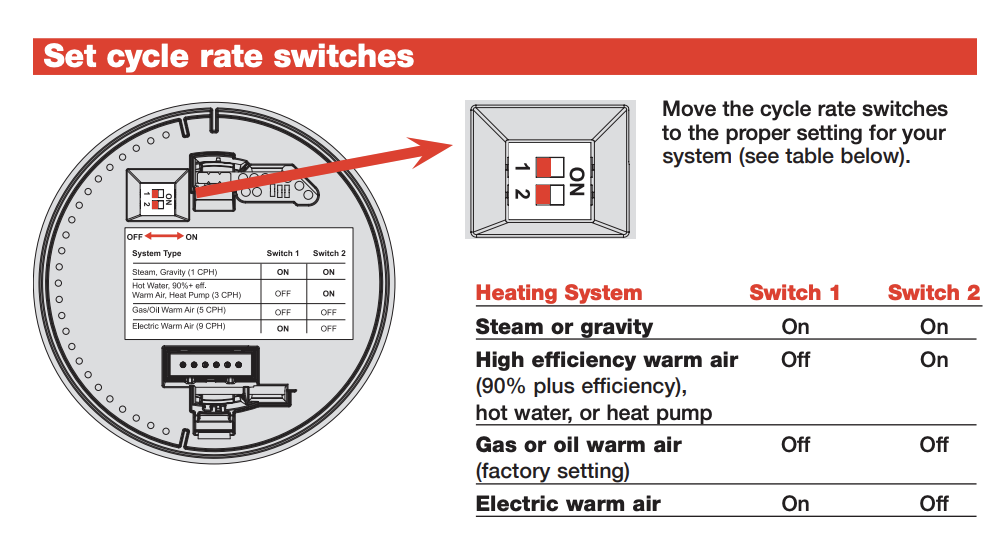 The cycle rate is actually quite slow -- exemplified by the fact that to force the system to toggle on instantly, I need to move dial pretty far above ambient temp, and then to get it to toggle off, I might need to go a bit below the ambient temp.

With our old digital thermostat, it was toggling *very precisely* around hitting the ambient temperature, which in retrospect, I think, may actually have been a bad thing? We used to get 5-8 cycles an hour (which I've heard may not be great for the system).

Now, it's cycling much more slowly, but actually it's hitting and holding target temperature pretty well without overshooting. So it seems that although it doesn't respond "instantly" around set points, it responds precisely.

Here's my question:
Is this working the way it should, and is this much slower cycling *a good thing*?

P.S. You may wonder why we ruled out Nest or similar? We don't have a C wire and it would be a royal pain to retrofit it. Virtually impossible to run a wire up from the finished basement without demo due to the direction of floor joists, etc. And installing a retrofit kit to our particular system was not going to be simple due to how it's installed, and we don't want to pay our heating person $500 to do the retrofit -- WiFi control is just not important enough to us to go that route. Figured I'd mention this since it's an obvious and valid question. We also tried one of those "fake C wire" hacks that is done right at the thermostat with a power adapter, but a) having a power cord run down the wall is ugly (and hiding it is not simple when we've got plaster walls -- again, don't want to do demo) and b) the mod with this adapter kit was making the system behave kind of funny, and the last thing we want to do is break a very expensive boiler component because of a $20 Amazon adapter for a completely unnecessary "feature").
0