New to this website but I have been reading on and off all of the random posts posted by others as it relates to in-floor radiant for the last two months. And out of all the other sites I visited, this seems to be just about the only one where many have a wealth of knowledge regarding in-floor radiant and I was hoping to tap into some of that knowledge for my situation.

So to provide some context, I bought my vacation home in 2017 and this particular home came with in-floor radiant heat. Keep in mind that I came into this house not knowing a damn thing about heating systems at all since my primary residence relies on min splits for heat. I wasn’t even aware that in-floor radiant was even thing. Anyway, the first thing I noticed was how long in-floor radiant takes to heat up. But as I now know, it’s just the nature of the beast. Anyway, in the spirit of being brief (I hope), fast forward to the present and I had my local oil provider send one of their guys for routine maintenance on the boiler/furnace this past February and at the end of it all, he gave me the bad news that one or all three loops for the zone (Living Room) had a leak. He left and I was left scratching my head on what to do not knowing a lick about in-floor radiant. So I embarked on a mission to learn and understand in-floor radiant so I can get to work not just on finding these leaks but also how to make my system as a whole more efficient.


So this is where I am as of today. I learned how to pressure test hePEX and indeed, out of the (3) loops, one had a leak. I sealed that bad boy with GeoLoop, pressure tested and after a month, it’s still holding. So I am good on that end. Moving on, found a few bad designs with the system that I corrected (like the circulator feeding said loops was installed in the input of the thermostatic mixing valve and not on the output side). Anyway, I found way too many design flaws on this in-floor radiant to describe on here and I have corrected all of them as per the standards of the industry.


But the reason for my post is that I am stuck at satisfying my heat load for my living room( 26’ chalet ceilings, with an all windows northern-facing wall and a 893 squarefoot floor plan, of which 665 squarefeet is exposed) with the current in-floor radiant set up. Using a Flir Thermal Imager, I was able to calculate the length of each loop which comes at about 280’-300’ for each of ½” Wirsbo hePEX running a Taco 007-F5. I suspect the circulator is not enough to meet the demand. So I proceeded to spend a whole weekend doing a detailed Heat Loss Analysis by hand, measuring in detail every of the living room and came up with a Heat Loss of 114,432 BTU/Hr. I followed up calculations with Borst Heat Analysis calculator and the numbers were very close indeed. So I used the 114,432 BTU/Hr and plugged it in to determine my flow rate using GPM= 0.002*BTU/20 and according to those calculations, I require a circulator with 11.444 GPM flow rate capacity. But if you divide that by 3 loops, that equates to 3.81 GPM per loop when I know that the flow rate for in-floor radiant isn’t usually that high from what I’ve seen in the internet space.


Additionally, Wirsbo/Uponor pressure loss tables has the head loss for ½” hePEX with 100% water at 3.5 GPM at 120 Deg Fahrenheit at 33.64 head per 100’ which amounts to a total head loss of 100.92’.
What am I missing here? I trust my numbers but I don’t trust whoever designed this in-floor radiant system and I’m beginning to think that whoever did the job, just winged it. I apologize in advance for the lengthy post. But just wanted to give all the details so that maybe I can be helped. Thank you in advance. Heat Loss Analysis included. 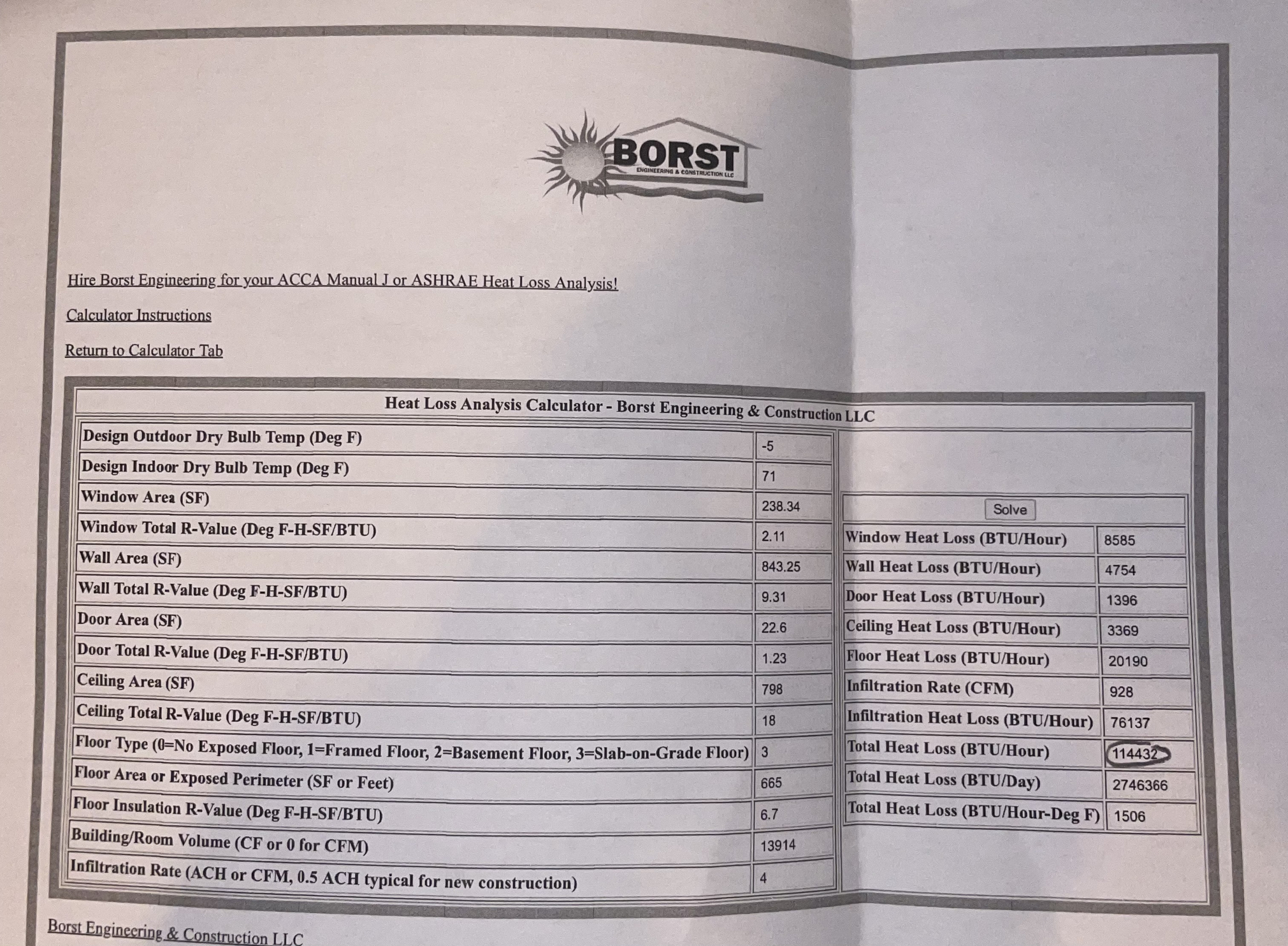