Jim R. Member Posts: 58
August 2021 in THE MAIN WALL
Is there a PEX springy-thing accordion-type damper that will accommodate the linear change in length? I don't have space to make a U-bend which I've seen elsewhere.

My baseboard to panel radiator project has gone well except for one major thing: PEX expansion. I have a reverse-return system with the lines boxed in along the wall. Tee's go up to the radiators which leaves very little room for linear movement. About 60' of 3/4 pex total secured with clips about every 24".

Most of the pex is covered at this point except for connection points and the ends where it ties into copper. Is there anything I can do? I'm worried the expansion/contraction will wear on the fittings. I wanted it quiet so I used clips to keep tlines from touching each other or the wall. Should I have left it loose to allow for movement? I used black 3/4" straight lengths from Viega I believe.

In this pic, I planned to put two more clips but I don't know if forcing it to NOT move is the right thing. To the left is copper pipe going into the floor (no movement) and to the right is a tee into the radiator. Pipe gets water up to 180 degrees. Ugh. 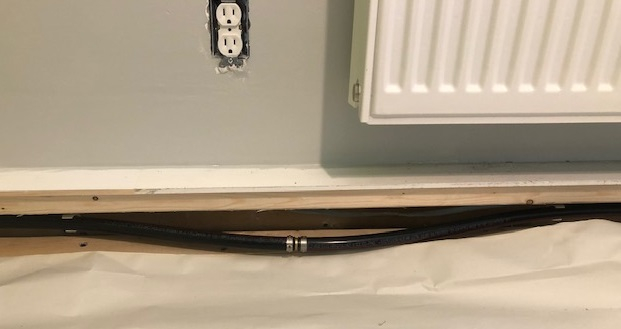