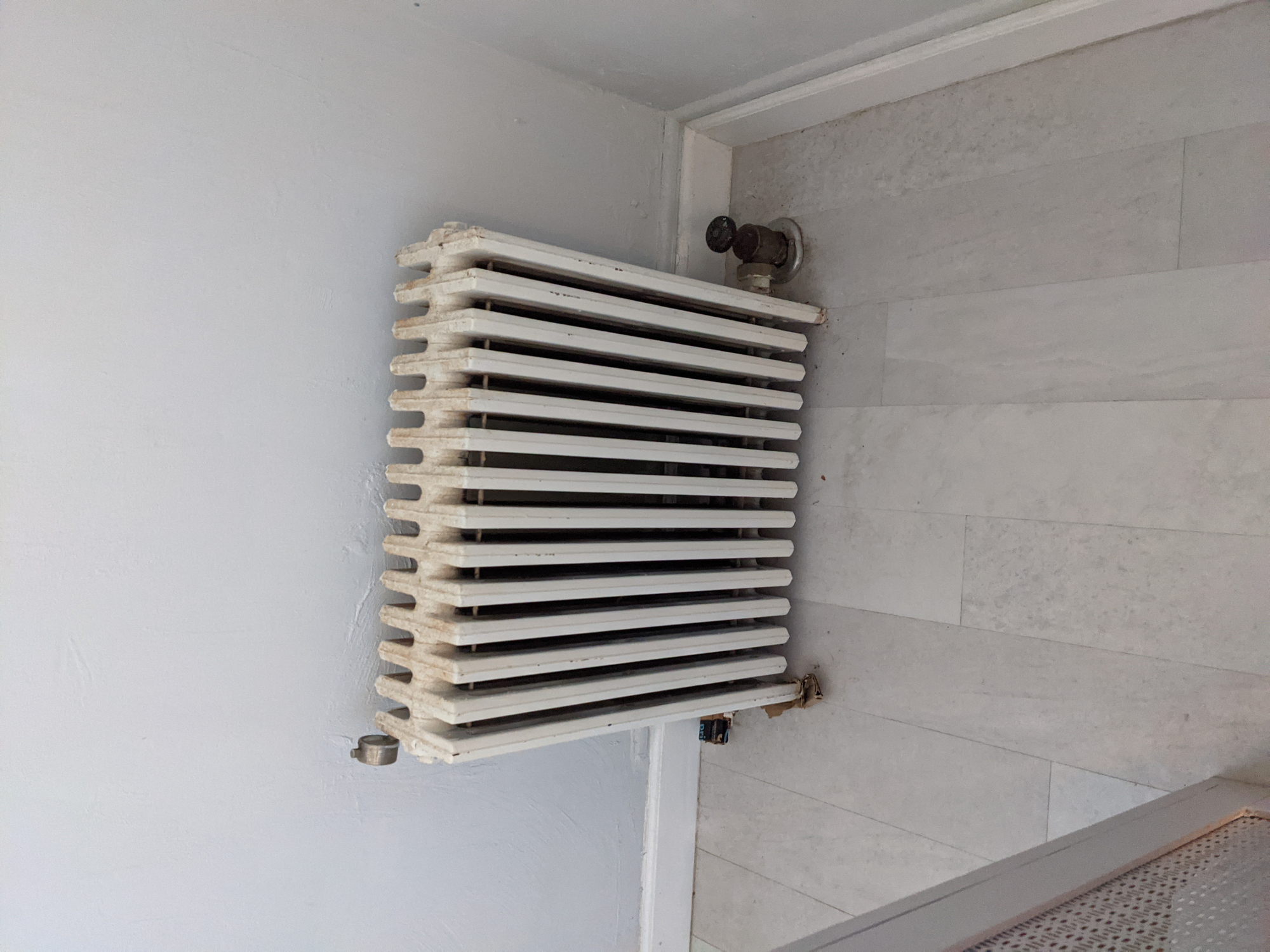 I have what I think is a 1 pipe steam system. There's a supply valve on 1 end of the of the radiator and steam vent on the other side.
At the furnace there's a thick pipe with smaller runoff pipes which seems to supply all the radiators in the house. This thick pipe spans 3 sides of the house at the end of which there is main steam valve and then a thinner pipe which connects back to the furnace.

There really isn't a problem with any of this. All the radiators connected to this main heating pipe are working. The issue is with the heater in the downstairs bathroom. This bathroom is built outside of the original exterior wall. Basically was converted from a mud room. The pipe which supplies this radiator and another small radiator in the kitchen is separate from the main. It branches off the main to supply these 2 heaters. It doesn't circle back to the furnace either like the main does. Now the kitchen furnace functions like it should. It heated up everytime without any problem. At the moment I removed the Gorton C vent from the kitchen and I'm using this vent in 1 of the upstairs bedrooms. I put a cheap generic vent in it's place in the kitchen since I don't need the heat in the kitchen. I also turned the supply valve off to the kitchen. The kitchen is sufficiently warm without the extra heat. The issue is the bathroom. It used to come on only sometimes with a lot of banging and gurgling. I tried putting new vents to reduce the banging but the system didn't even turn on at all so I put the old vent back. It's a Gorton D. At one time when the dining room wasn't heating correctly and the thermostat was cold then this bathroom turned into a sauna so I know it's capable of working. But now the supply pipe remains cold to the touch. Sometimes if I remove the vent completely it will start coming on. If I turn the thermostat to 85 it will work. But under normal circumstances the pipe just stays cold. I check the pipe in the basement the pipe was hot where it runs left to the kitchen. But where it runs to the bathroom the same pipe is cold. Especially where the pipe goes vertical at which point it's cold. When I reach up to where the pipe disappears into the basement ceiling or bathroom floor it's actually very cold to the touch. Like outdoor temps. Keep in mind the pipe running under the bathroom floor is essentially outdoors since the bathroom is outside the original external wall of the home.

In the below photo the black pipe is supposed to heat the kitchen and bathroom. It runs about 8 feet to the left and that's for the the kitchen. On the right side with the peeling tape that's the pipe to the bathroom. Usually the black pipe gets hot and the left side to the kitchen gets hot (though later than the rest of the system) but the right side is just warm until the vertical runoff after which it's cold. I'm in Luzerne, PA, day temps are in the mid 30s.

Any help is appreciated, Thanks! 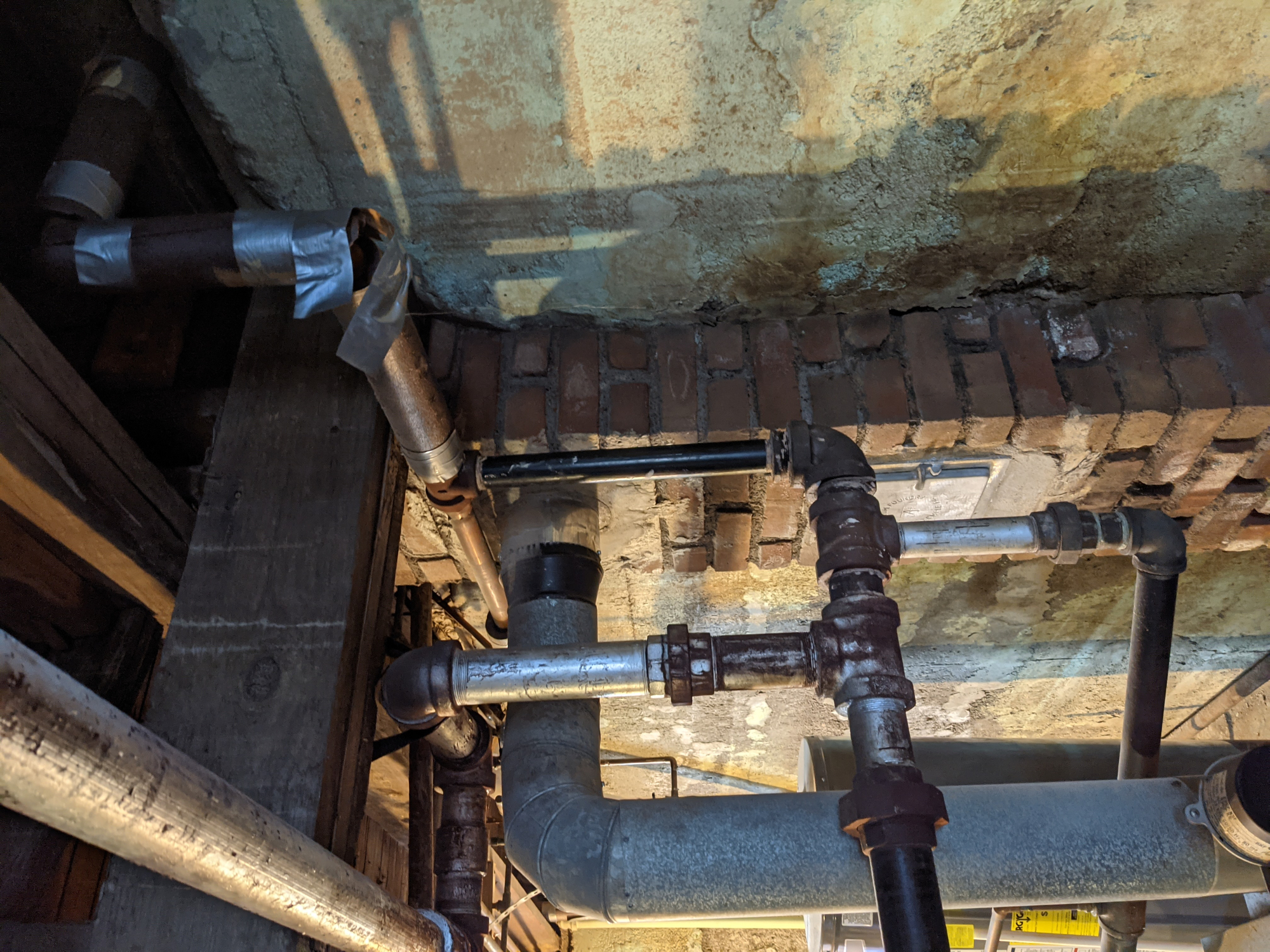