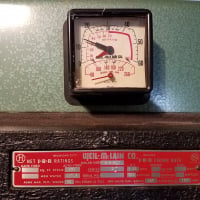 
The old fashioned no bladder tank that hangs in the basement ceiling joist bay.

I'll also pay for packing and shiping, or if your within a couple hours I can pick up.