Skyline Member Posts: 116
September 2020 in Gas Heating
My 20 years old Triangle Tube Phase III had been replaced with Viessman 222-F Model B2TB 35-125 with NG. While I debated pushing out the replacement to next year, the Phase III had sprung a leak internally, there was no choice, but to do it this year.

It's been four days the 222-F providing DHW and it does that with ease. The 26 gallon reserve tank is really great. Even if the boiler is off, there's still DHW for a good while. Just like the Triangle Tube used to do.

Last night was the first time, that the heat actually kicked in at five in the morning in zone #1, thermostat set @70 degree. To say that the combi-boiler works differently is an understatement...

At 05:30, I've seen the boiler running at 14% capacity and zone #1 circulator running. A bit later, this is what the display showed: 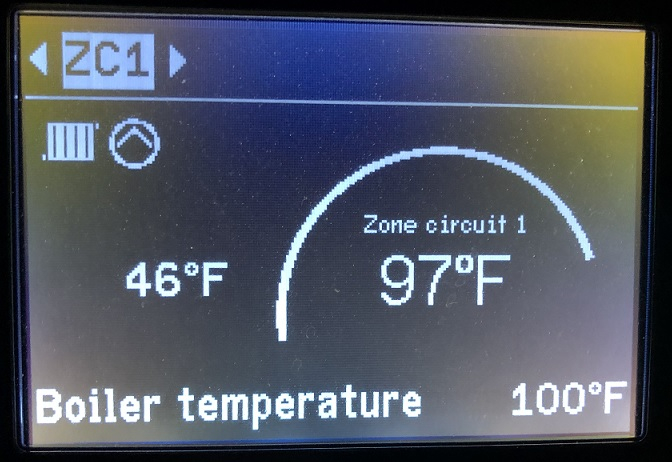 About an our later, the display showed: 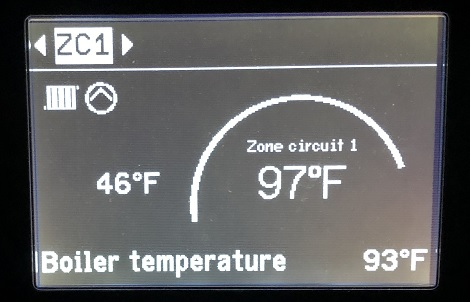 In both cases, the burner is off, but it was captured about an hour later: 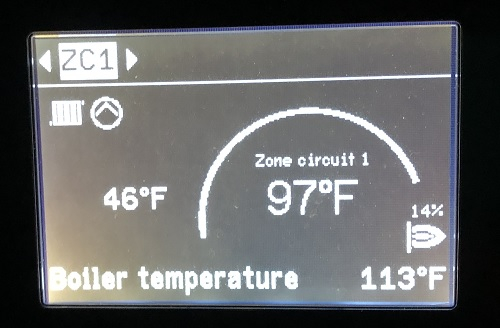 I do not know how many times the burner was on and how long. Is there a way to capture this information? Well, other than sitting front of it that is...

With the heating slope set to 1.4, it took the boiler three hours to increase zone #1 temperature from about 67 to 70 degree. I've seen somewhere, that the optimal heating slope for this boiler is 1.3. Setting the slope to optimal would increase the time to reach the set temperature, correct?

My old boiler would have increased the temperature in zone #1 in less than hour, given the same circumstances. While it had always fired at 100% firing rate, I am not certain that doing the same in three hours would cost less. At least, not substantially less. Would that be correct?

The answer does not really matter in my case, since there was no choice, the Triangle Tube had to go...