how to set the pressuretrol low enough and boiler flooding issues

diamond67 Member Posts: 9
December 2019 in Strictly Steam
I’m a homeowner with a one-pipe steam boiler. The quick and short is that I think the technician set the pressure too high during my recent annual service. (I’m not 100% sure he changed it, and if so, I’m not sure why either.) The pressuretrol (Honeywell PA404? or similar) is set to cut in at 2 psi and I’m not sure of the differential. But the pressure gauge was showing 5 psi.

We’ve had the house for four years now and the system has been relatively trouble-free. It’s a weekend home, so it’s just kept at 50F when we’re not there. We’ve had some leaking vents and a leak at a connection that were easily fixed. We’re planning on replacing the entire system soon but need this one to work in the meantime.

The oil-fired Weil-McLain SGO boiler was installed in 1995 but the distribution piping is older. (It has asbestos insulation.) The house is from 1830 so none of this is original. It’s not a precious historic house; it’s just a small farm house that somehow never burnt down. The radiators and pipes all have good slope (and some of the floors do too.)

I recently had the boiler serviced, and now it’s conducting some New Age musical number and the system is flooding to the point where water was spurting out of an old vent. I think this is due to the pressure being set too high. Could I be on the right track?

The boiler is definitely sending up very wet steam to the point where the water level in the boiler is dropping and the automatic feed is coming on. After running for a while and then turning off, all the returning condensate fills the boiler to over the glass gauge. I’ve drained the water down to the water line and this just repeats itself.

Skimming seems to be one of the first things to try, but I don’t think I would be able to get plug out since it’s so rusted. I also don’t think this is the problem. The water in the gauge glass is very clean. There are no signs of oil and there’s no reason why the system would suddenly get dirty or oily.

That leads me to think that the pressure was adjusted and set too high. When I first saw the 2-psi set point and 5-psi operating pressure, I didn’t think anything of it because my memory was off by a factor of ten and left out the decimal point. From what I’ve read, it should be 0.2 to 0.5, which leads me to my question at the top: how do I set the pressuretrol low enough?

A couple other things I’ve noticed: The boiler is rated for 100,000 Btu/hr for steam but the installed radiation is only 47,000 (5 radiators varying in size) plus piping etc. There are no main vents but I’m not sure if they’re necessary since the longest horizontal run is about 25 ft; the rest are about 10-15 ft long. Since the system was running ok for the past few years, I don’t think these are problem right now.

I have a few more questions if anyone has any answers?

Why would they put the skim port immediately above the electrical service shut-off switch? And why doesn’t this come with a valve so you can readily skim this? The literature says to have a qualified technician skim the boiler, but then I’ve read here to do it every day, week, or month for certain conditions.

Why doesn’t the pressuretrol’s typical operating range match the operating range for the system? My unit goes from 0.5 to 9 psi. It seems this model is common on lots of one-pipe systems even though they don’t need pressures that high.

Why would they install a pressure gauge that ranges from 0 to 30 psi when the system only needs less than 1 psi? 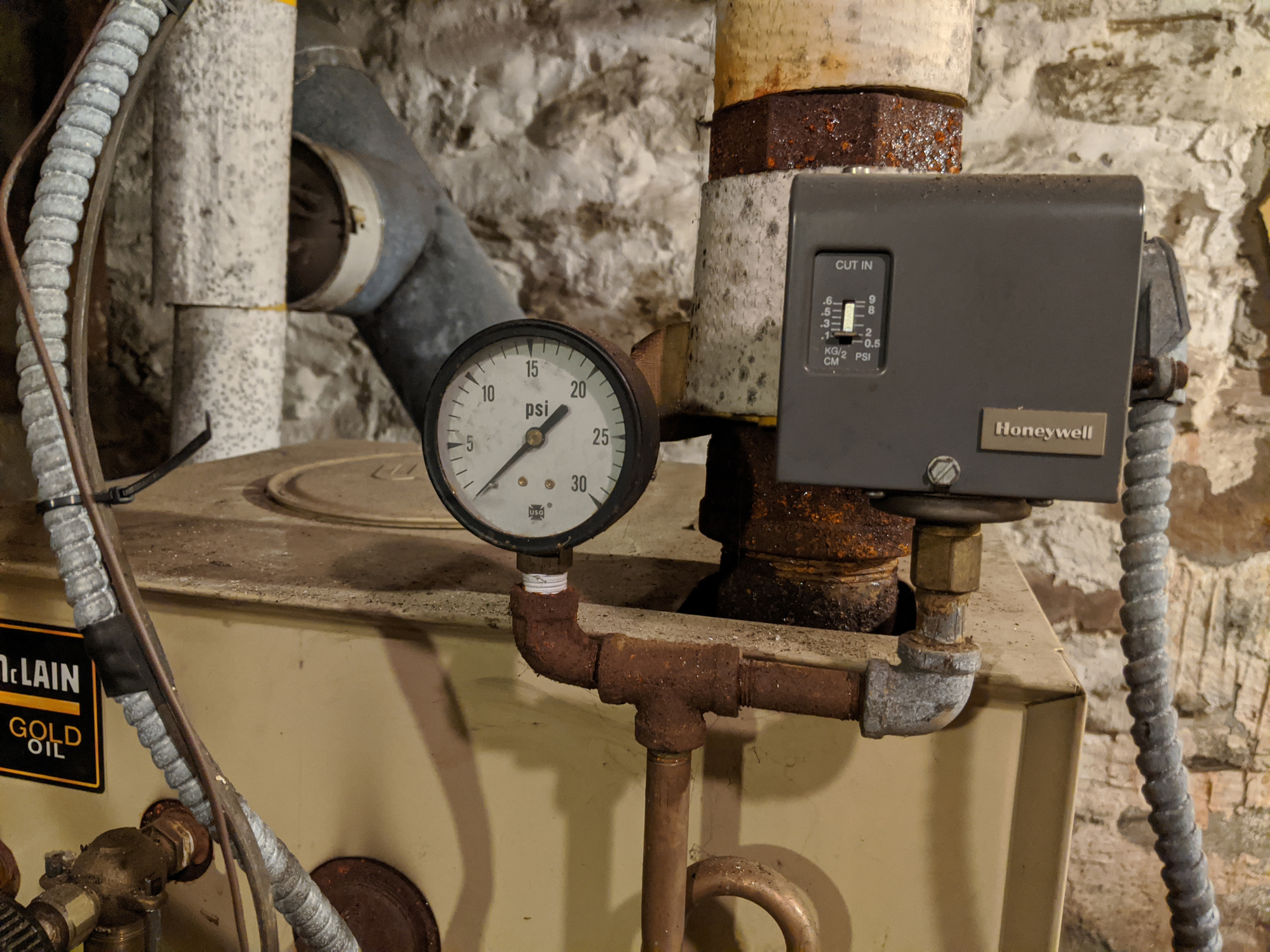 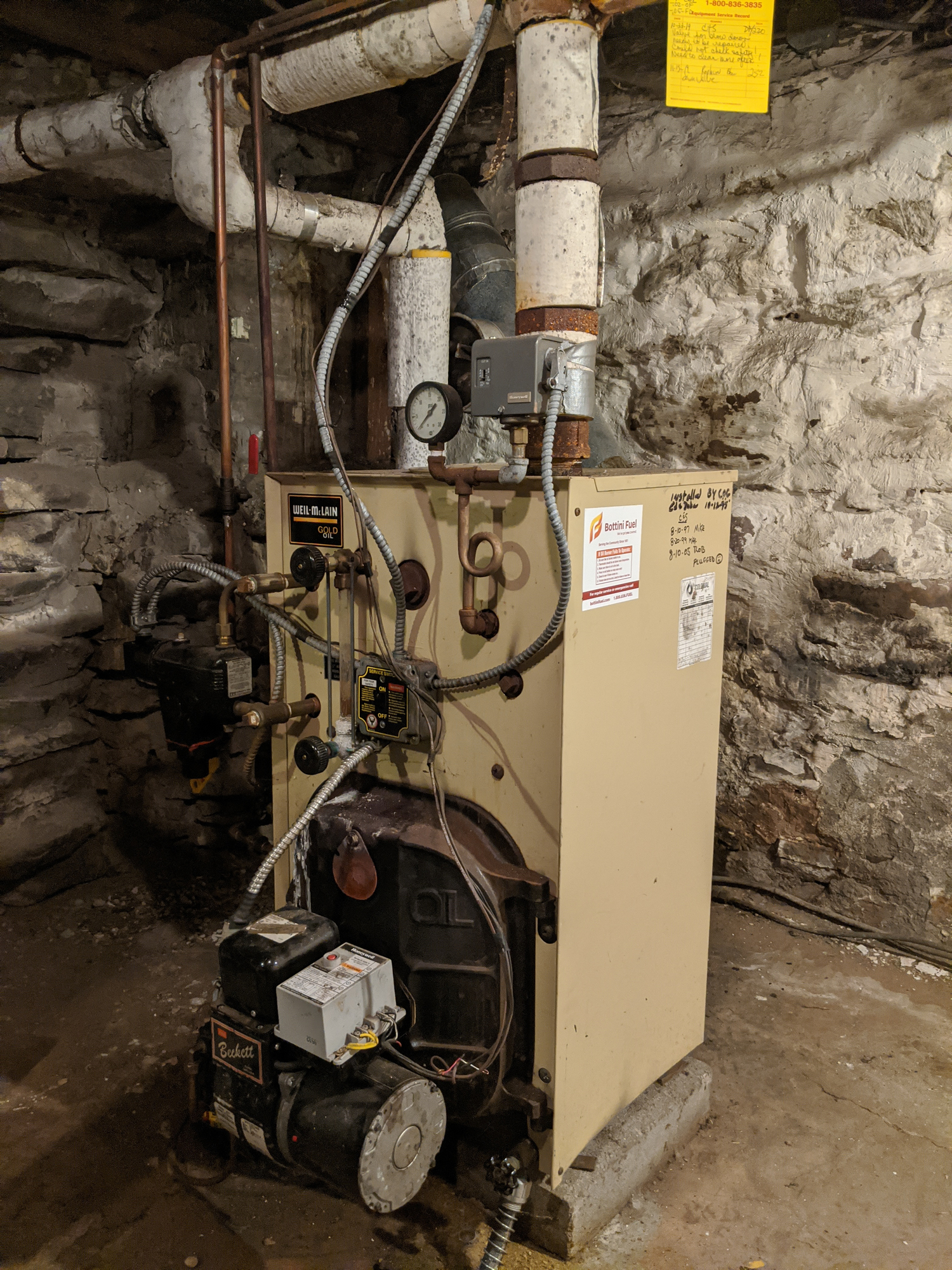