D107 Member Posts: 1,802
October 2019 edited October 2019 in Gas Heating
We are gearing for our first full winter with our new Peerless MI-03 (70mbh input/50mbh Net output) boiler. Boiler was installed at start of Spring so we had some heating application then. Heat Loss 38K, 3 zones (2 cast iron, basement baseboard.) TACO VT2218 set on 20º∆T pumping away, 3 Taco ZO75T2-2 Zone Sentry Zone Valves with Caleffi QuickSetter 132 Series on Return. 48 gallon Turbomax-45 set up for HWH priority only, not as buffer. Not sure if VT-2218 Boiler Protection feature can be applied when on ∆T setting, but the Hydrostat 3200+ has its own ‘Circulator Hold Off’ Boiler Protection that only circulates if boiler water temp reaches 125, and will shutoff when boiler temp reaches 115. Starting in the summer we switched boiler to cold start since DHW was its only application. Worked great.

I did a trial run today with the main zone only with house temp at 67 (we usually keep a day/night constant 65 in order to avoid boiler working too long and hard to make up the setback.) I set the t-stat to 70. The return temp started at 62º. For at least half an hour the burner fired, while the circulator went off an on. Radiators warmed, I turned this off when room temp reached 68º. Certainly took more than the standard 10 minute duration to bring the return temp over 130º.

The attached photos show the VT2218 readings at various intervals over a 30+ minute period when the circ was running at speeds generally ranging from 3gpm to 5-6gpm. If in photo #1 Supply temp is 116º and Return is 62º then hydrostat circulator hold off is what must be operating here--it will continue to pump until supply temp hits below 115. The circ's ∆T setting (which has no boiler protection option) should probably be moving less than 5gpm given the 54º ∆T. 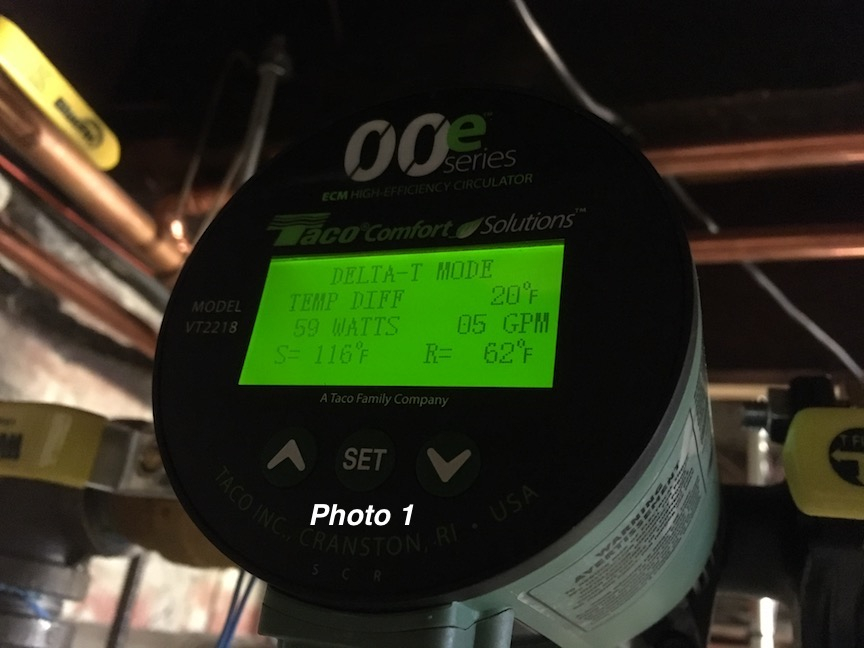 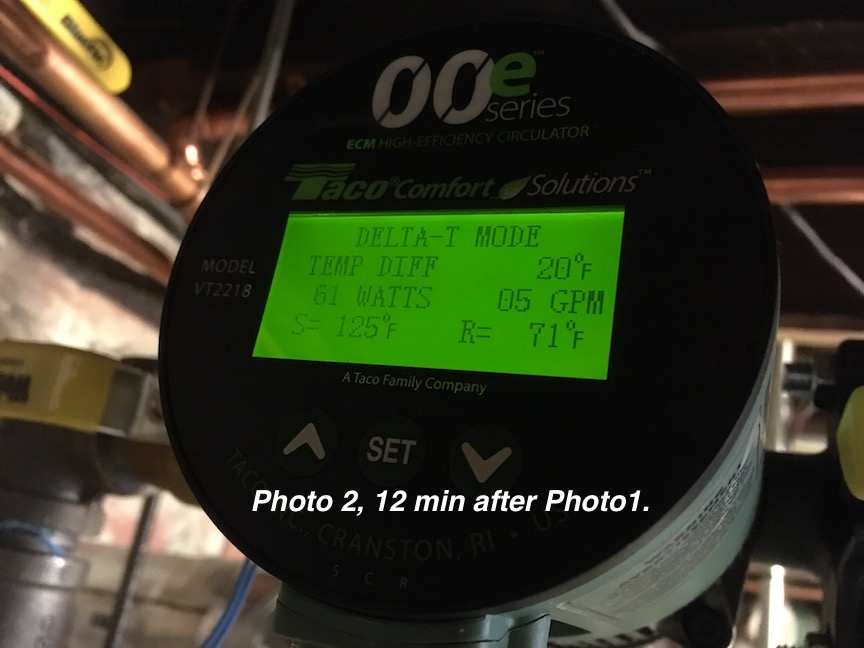 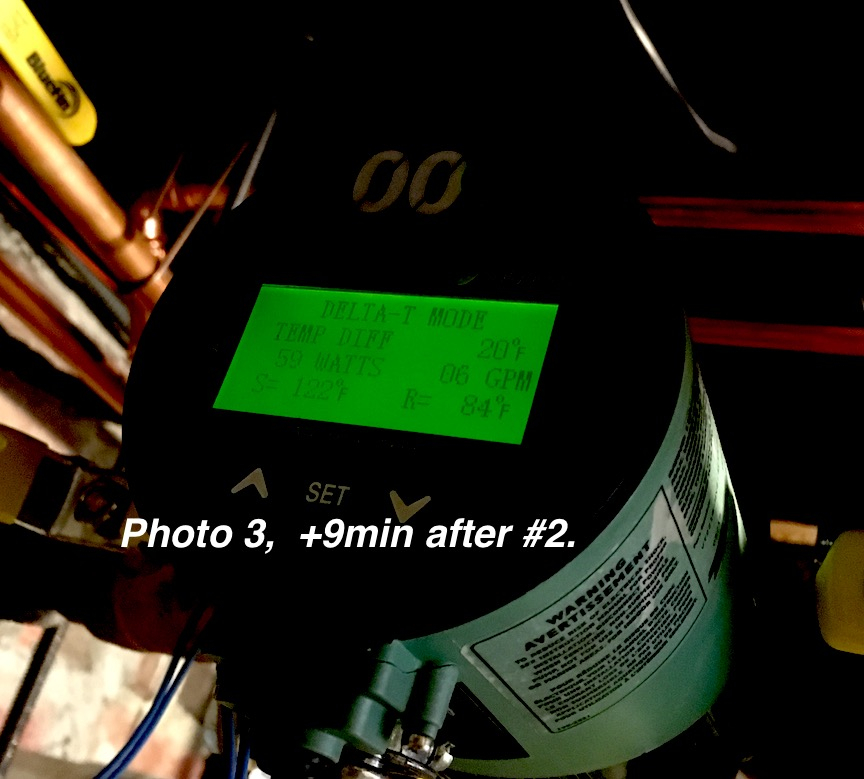 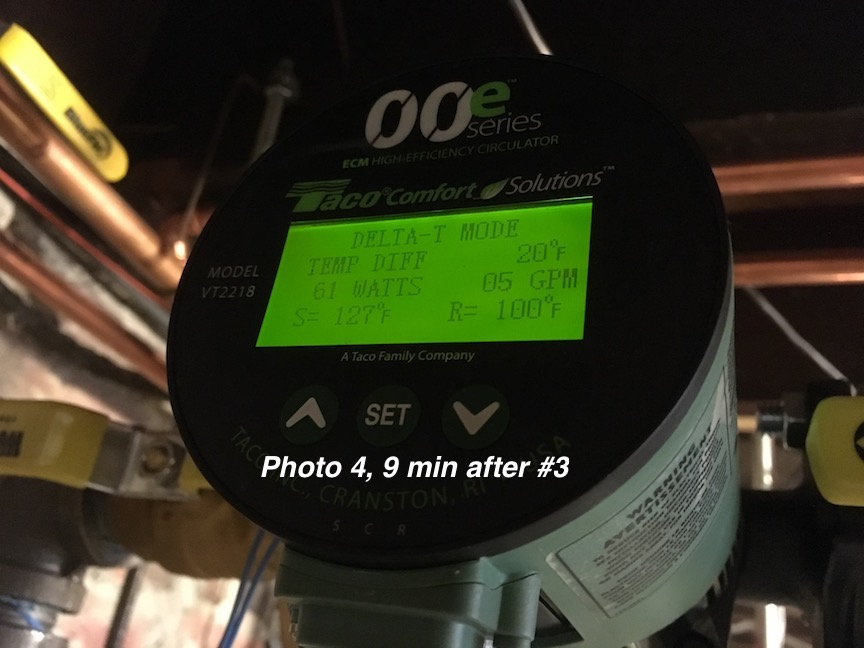 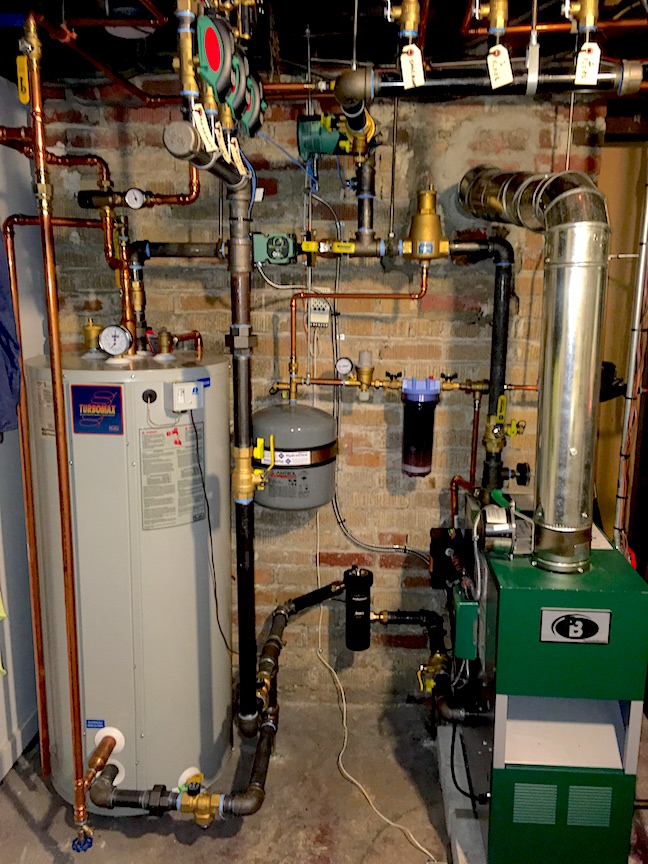 My concern is that (assuming 25 gallons water in the heating piping system, maybe 15 in zone 1?) we’re throwing a lot of cold return water at the boiler with no protection other than what I’ve mentioned above. Also that existing circulator- stopping boiler protection looks like it will slow the heating cycle down considerably. We had hoped to mitigate this by having no room setback, keeping all stats at 65 all the time. This way lessening the big morning cold return dump that would have ensued from a 2-3 degree night setback. I’m thinking that re-establishing the warm start for the heating season is worth considering. So admittedly today's test was set to overcome a three-degree setback, but in fact really only a 1 degree setback since I stopped it when it hit 68º. (One zone only tested.)

Note that the Turbomax aquastat is nominally set to cut in at 135º and out at 150º which is based on the water temps at the location of the probe, which is halfway down the height of the Turbomax tank. When the aquastat shuts off the burner at 150º, the T&P gauge at the top of the Turbomax—which extends down about 7 inches—is reading 155-160º; it cuts in around 140-145º --all based presumably on the hotter water towards the top of the tank.

So, theoretically, with such DHW settings, this is never truly a cold start boiler, even if the Hydrostat is set for ‘cold start’. However does being a reverse return alter that? The boiler itself holds 5 gallons—not super low mass—but heats up quite fast. The real concern is heating delays due to circulator protective stoppage and the return water volume in the piping hitting the boiler, though hopefully not all three zones at once. If we had an all night power outage at 0º outside temp and house dropped to low 60s it would probably take a LONG time to recoup on all three zones.

So what is the recommendation?