Doug83 Member Posts: 35
April 2018 in Domestic Hot Water
Okay- I think this may the only place to get accurate direction on for this problem.... Some of you may remember I recently replaced a 45 year old atmospheric boiler/w hot water coil ( I also have a back up hot water heater/and summer use) with an HB Smith 520K gas fired /power burner. They also installed a higher end type mixing board panel with a controller (see pics), mixing valve and recirculating pump. To be honest, I am not sure there was a circulating pump before....Here is what I do know. We never had a hot water temperature issue before. No one ever complained about it, and I lived in the 5 apartment building for several years myself. The controller is set for 130 degree output, and I am quite sure that every time I saw the actual output, it was pretty darn close to 130 degrees. The new installation was in place in October 2017. This building is five apartments with one bath and one kitchen in each apartment.
A few months ago, the actuator on the mixing valve failed, and while the tech was there to replace the unit, we saw a spike in pressure to over 100psi ( it pegged the 100psi gauge). It must have been under 125 psi or the relief valves would have let go. It came back in short order to 50 psi, which is the set point of a cold water booster pump we installed a decade ago. No one could understand why we had that pressure spike, or remember if it was there from the beginning. I immediately installed an expansion tank, and had not seen the spike since. A few days ago, one of tenants said that the hot water was changing from extremely hot, to lukewarm in a matter of a minute or two and made showering very difficult. This is the first time I heard someone say this..although after talking to some other tenants they said it started after the installation of the boiler and just thought that was the new system ( I should have never moved out of the building). A tech came in and spent all day trying to reprogram the controller...we used tons of gas and water... the controller could not come close to maintaining the 130 degree set point and would swing from 160 degrees to 90.... We saw that it appeared the recirculation line temperature was culprit. It makes sense, the hot water was relatively fixed, the cold was fixed and the only other water mixing with the cold water inlet to the mixing valve was the recirculation water. After 6 hours of that troubleshooting, I said let's stop, let me put the back up hot water heater on and try to understand what is happening here. I put the back up hot water heater on, and I was happy to find that the shower water was now relatively constant. The output of the hot water heater was 130 to 140 degrees, and showering was perfect. Here is the rub! The sink line, the farthest riser from the boiler room and hot water heater, wouldn't get full hot water.... It would go to 110 degrees, and then slowly drop to 86 degrees, in almost every apartment plus or minus a degree or two. I decided that the next step would be to shut the hot and cold water valves at every sink thin king that maybe cold water was passing through the faucets. I left the third floor apartment hot water valve open, and then ran the water. it did the same thing! This was crazy to me... I then traced the hot water outlet from the heater in the basement and measured 140 degrees as far as i could go before it disappeared into the ceiling. I have a few panel doors I could open after that so I could see where the first floor kitchen sink hot water was coming from. It was luke warm as well. I now want to find the exact location it taps from on the hot water line and see what is going on, although I am not sure I will find the answer. Here are my questions... Do you think we solved the problem that the sink line is the contributing issue to the recirculating water? What is strange to my is that the bath line was doing this before too with the new system...but now, not with the hot water heater. What is out of the picture is the mixing valve, and the new recirculating pump which I am pretty sure I never had before. Could this be a pressure issue with the booster pump pumping cold water into the recirc line?? I never had the problem before though...Could the high pressure condition have caused a check valve to fail? If so, how the heck will I ever find that valve.... Your incredible experience will at least give me some insight as to what to look for next... Thanks all!! 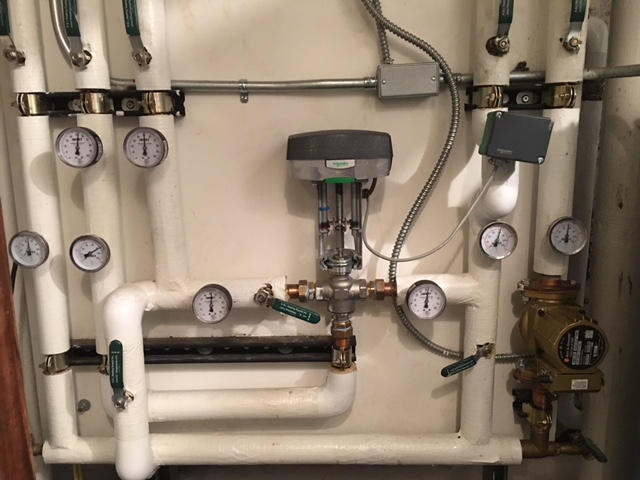 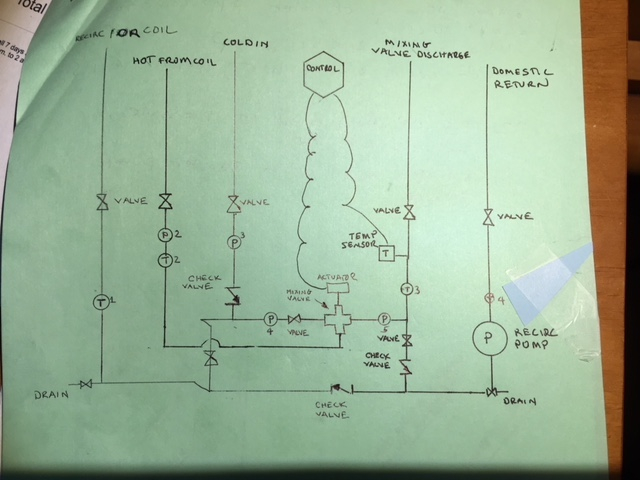