tony75 Member Posts: 10
January 2018 in Gas Heating
Thanks for reading my post. Nerves are getting frayed here. :-)

I have a boiler system that just passed a clean and check last week. There is one upstairs bedroom on my second floor, one of the furthest from the basement boiler, that has a trickle sound that lasts for several minutes. It is an unused bedroom, so I'm not always in tune with the sounds, but it has been going on for a few months. I thought this was due to air in the lines as it is the most common source of noise in a baseboard system, but I bled the lines today and only got one short burst of air (less than one second - midway through the bleed).

Here are the facts:

1) The baseboard heats well and the room is warm like the rest of the house.
2) There is no moisture related evidence of a leak in the floor, walls, or downstairs ceiling - something I'd be certain to find if this was an actual leak occurring over several months
3) The noise lasts for several minutes (I have set up an audio recorder to get a more accurate measure of the intervals and lengths)
4) The sound is not unlike the tinkling sound a toilet makes when the water doesn't quite stop running (a really tiny flow) or like you are pouring a tiny stream of water into a glass with some water already in it. It sounds very clear (not muffled) and has a certain ring to it that makes me think it is flowing through the pipe.
5) The boiler is 30 years old and I'm not sure the pump was looked at as part of the clean and check.
6) All the upstairs room have some amount of gurgling noise, but they are brief (10 seconds) and don't sound anything like what is happening in the suspect bedroom.
7) The suspect bedroom has a bleeder on one end of the pipes (the top one) and what appears to be a shut off valve (the bottom one) 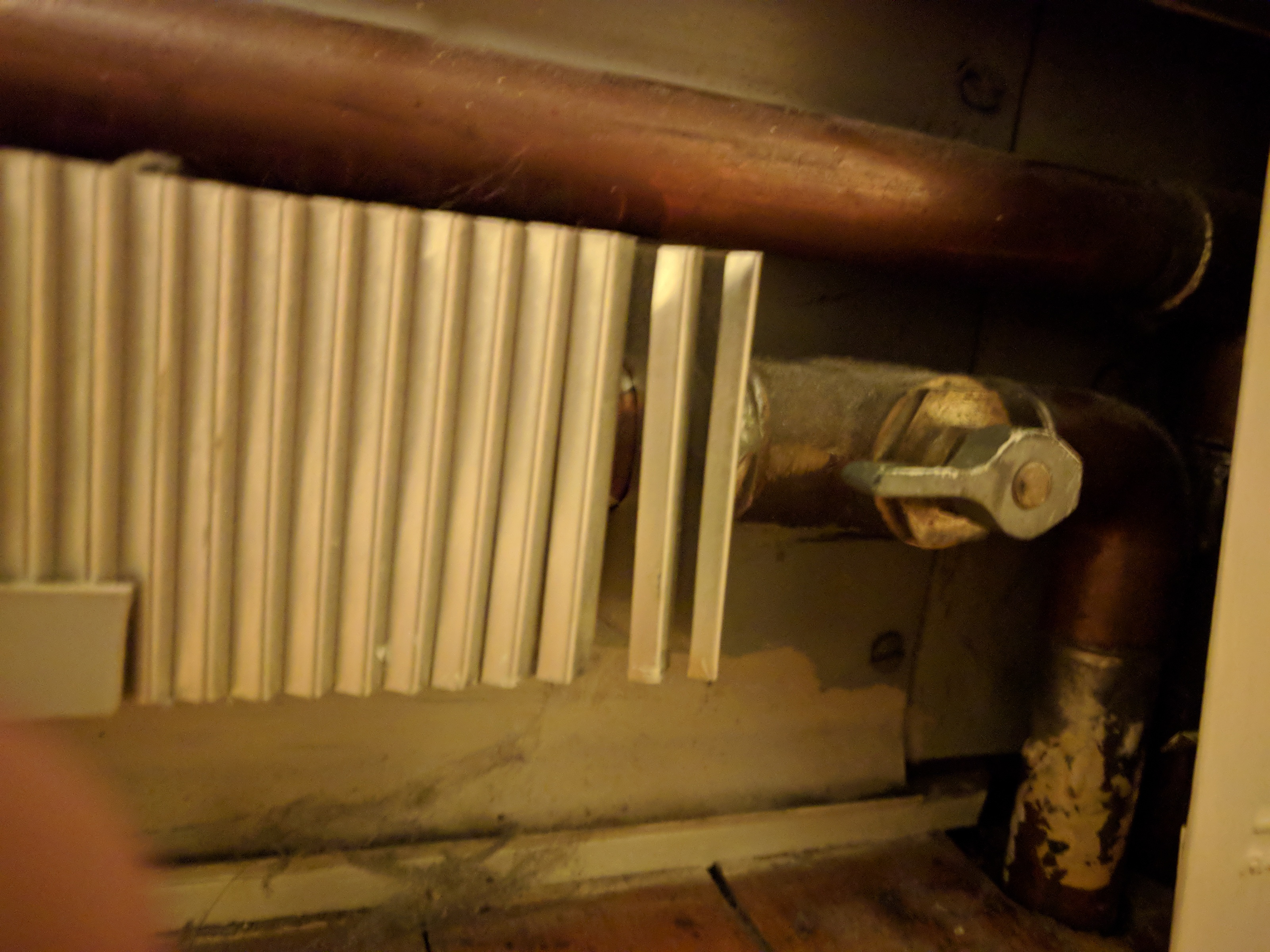 8) The noise stops immediately after half-closing the valve (not even one or two seconds later - immediately)
9) Today was the first time this baseboard was bled in at last 10 years (probably closer to 20). Same with opening and closing that valve.
10) The baseboard was very hot when I bled it, and started to make the trickle sound before I quit.

Since bleeding the lines today didn't solve the problem, I left a message with my regular HVAC company. I know they are booked through the month, so I may need to call somebody new.

What do you suspect is going on here?
A - A pinhole leak that is quite high up on that pipe and is somehow draining in a way that doesn't show
B - A blockage or significant corrosion on that valve preventing the flow of water
C - An issue with the circulator pump being weak
D - The baseboard needs further air bleeding (is this best done when cold or hot??)