Boon Member Posts: 252
August 2016 edited August 2016 in Radiant Heating
Hey folks, First ... Cheers to y'all who do this routinely, and do it well. Piping this was ... challenging at best, soul crushing at the worst. 50+/- hours in four days with a couple hours of help from the wife.

Second, I'm mostly pleased with how it turned out. Still need to figure out how to pressure test it. Tomorrow I'm finishing the system pump & manifolds [Caleffi 668S1 @hot rod can I reverse the drain & air separator and turn them around so the pex feeds up instead of down?

So... uh ... it occurred to me that I'm missing brain cell or two regarding controls. I decided that I would run the ∆P system pump 24/7 until WWSD by using the ODR inherent to the boiler (Lochinvar KHN), mounting the outdoor sensor and programming the ODR limits. Then, program the system circ for WWSD instead of CFH so that it runs 24/7 until WWSD [I think this ignores the heat/demand loops 1-3, if not I can jumper them]. That all seems simple & straight forward to me but am I right?

But how do I control the temperature in the buffer tank (boiler buddy)? ... I think I should use the system supply sensor that came with the boiler and connect it to its system sensor terminals, but it is too small for the boiler buddy's control well. Shoving it in the wrong size well seems crude. Should I ditch the boiler buddy's well? I could maybe use a 3/4 x 1/4 bushing and then use the system supply sensor; I have zero faith that I can tighten the bushing into the tank enough due to the insulation.

And can someone point me in the right direction on wiring up the thermostats and actuators (#6564 not purchased yet) - one actuator for each bedroom. I figure I get a 24v transformer, four T87 thermostats, the actuators, and wire them all up. Or do I need to buy a Taco control box thing? ... I believe this would all be totally independent of the boiler, except maybe I can take 24v off the boiler but probably not enough power for all that. And our general contractor will be putting in space pak A/C in a few months [I've had enough of this] so ideally I'd rather not use the T87 if there is a thermostat that can work both heat & cool.

Thanks for pointing me in the right direction.
Boon

My biggest gripe is that I delayed wiping off some excess thread sealant on the buffer tank tees and now it is harder to clean off. If something looks off-plumb I swear it is the angle of the photo or a few of the strut hangers aren't tightened. 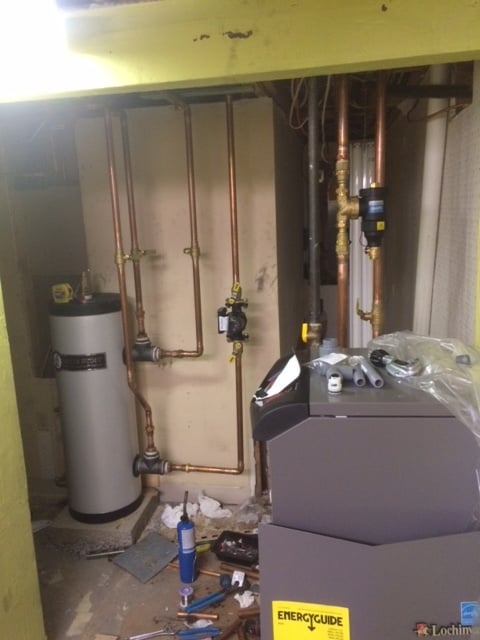 Manifolds will go on the wall where the partial plywood is hanging. Need to put up more plywood. 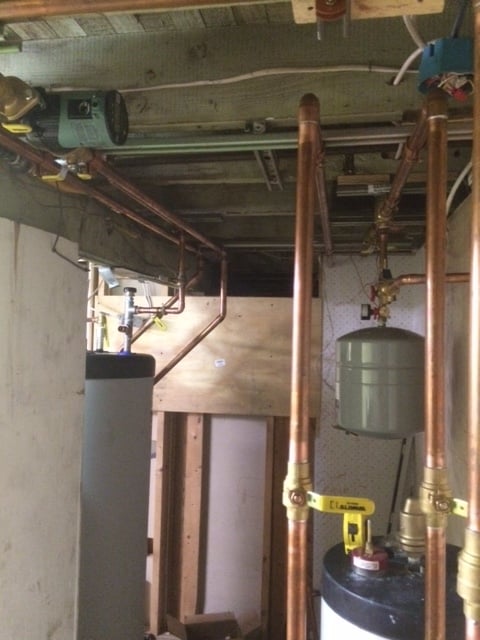