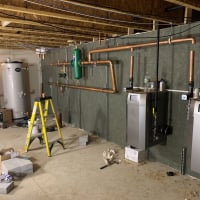 I have a customer who has purchased this pump online to bump his PSI from the 70 he's getting now to 90psi. I explained that the problem is not the current pump and expansion but the super cheap shower valves he did not want to change during his remodel. Regardless, I was hoping I could find someone who can tell me if this style pump will work installed with a well and a pump in it and expansion tank.

Can this pump be put on after the expansion tank just to boost the pressure as the customer wants?
Tom
Montpelier Vt
0