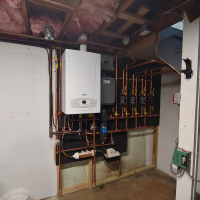 superdave Member Posts: 155
July 2011 in THE MAIN WALL
I have old building with 2 oil fired boilers each have 2M BTU with coil in side. Client want to go with wall hung boilers gas fired. Building is about 52,000 square feet with 68 units all with 1 bath and kitchen. What would be the needed gals of hot water storage needed. I pane on using 6 wall hung boilers with an output about 2.1M BTU.
0