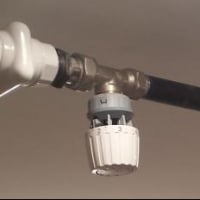 nz Member Posts: 113
December 2011 in Strictly Steam
So, I replaced the bad drip trap in the garage (Dunham 2E) with a new cap and disc - and the pipe below it is no longer 212 degrees. This allowed the radiator in the garage to heat up more. There is still a light hammer at startup, this may be due to bad traps in the radiators above (I believe there are two-three radiators serviced by this return line.)