mixelangelo Member Posts: 3
October 2022 in Gas Heating
Hi there. I bought a 104 year old house last year in Vancouver, BC with hot water heating, mostly with old cast iron radiators but with some baseboards as well in the basement. The boiler is a 34-yo Super Hot, 100k BTUs. The house is 3000sqft spread across 3 floors, each with its own zone.

Please forgive any vagueness or inaccuracy in terminology in what follows, as I am a layperson and still learning a lot about boilers!

I had the boiler inspected at the beginning of last season (fall 2021) and it ran well all winter long. (Not particularly efficiently, but it worked.) The pilot light went out twice, both times on very windy days, but I was able to re-light it without a problem. In May I turned the boiler off entirely (possibly a mistake?). After starting it up again last week, it ran for a few hours and brought every zone up to temperature, but after a while — and I *think* it was a while with no zones calling for heat, but I could be wrong — the pilot light seems to have gone out. The knob on the gas valve was still set to ON, of course, but there was no "hiss" of flowing gas (and I could not smell any either).

I got an "inspection" + service from a local company. (The fellow who inspected it last fall is no longer available, so it's a different person/company.) He initially said the issue was likely to be a defective heat exchanger that was causing the system to get too highly pressurized, triggering a safety mechanism that cuts the gas. But I am not sure that he did a proper inspection; this was his hypothesis based solely on my description of the problem, but he didn't witness the problem occurring, nor, I think, did he look at the heat exchanger. He generally seemed to think that the system was beyond its useful life, though I've not had any other problems with it (e.g. no leaks, that I have seen, at least).

He did replace the thermocouple and tighten a connection on the pilot gas line, which he then said might be the actual problem rather than the heat exchange. But that did not fix the problem; the pilot light went out again a few hours after he left.

I spent some time watching the boiler yesterday evening and I noticed a few things, not sure if any/all of them are relevant: My main questions:

1. Most important: To what extent is the system safe? As I mentioned, when the pilot goes out, the knob on the gas valve is still set to ON, but there is no evidence of gas flowing, so it seems that so far the gas is properly shut off by whatever safety mechanism may be triggering (?). But I'm really not interested in having the house blow up.
2. Any ideas on what the problem could be?
3. Overall, is it just time for a new boiler, or with a fix might this 34-yo workhorse still stand a chance for a year or two?

I get the feeling the installation is a bit of a mess; the house inspector passed it when we bought the place, and yes, I know they don't often know what they're doing (and neither did I, especially at the time); but this is the way things are.

Overview (pic taken when system was cold this morning) 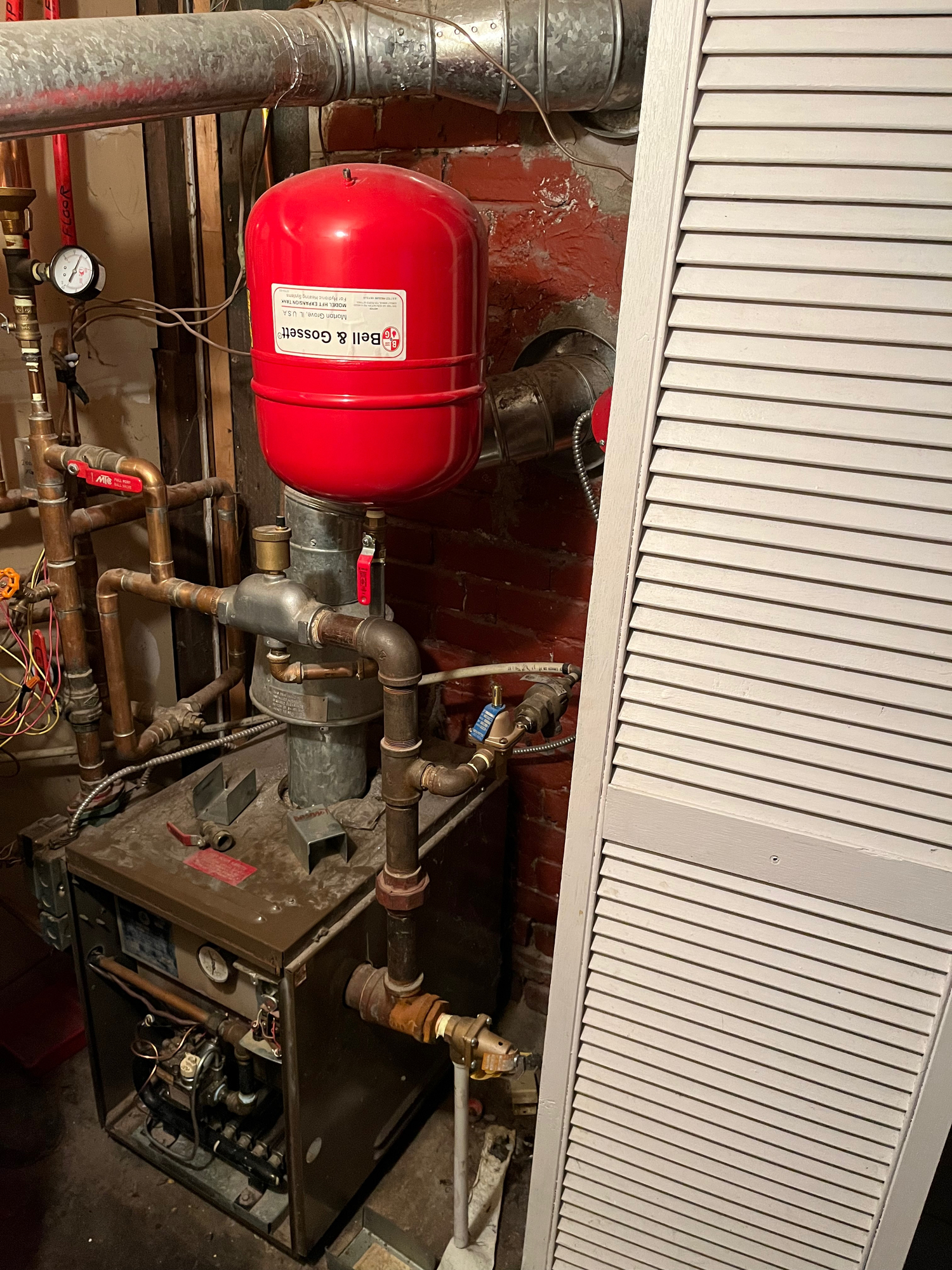 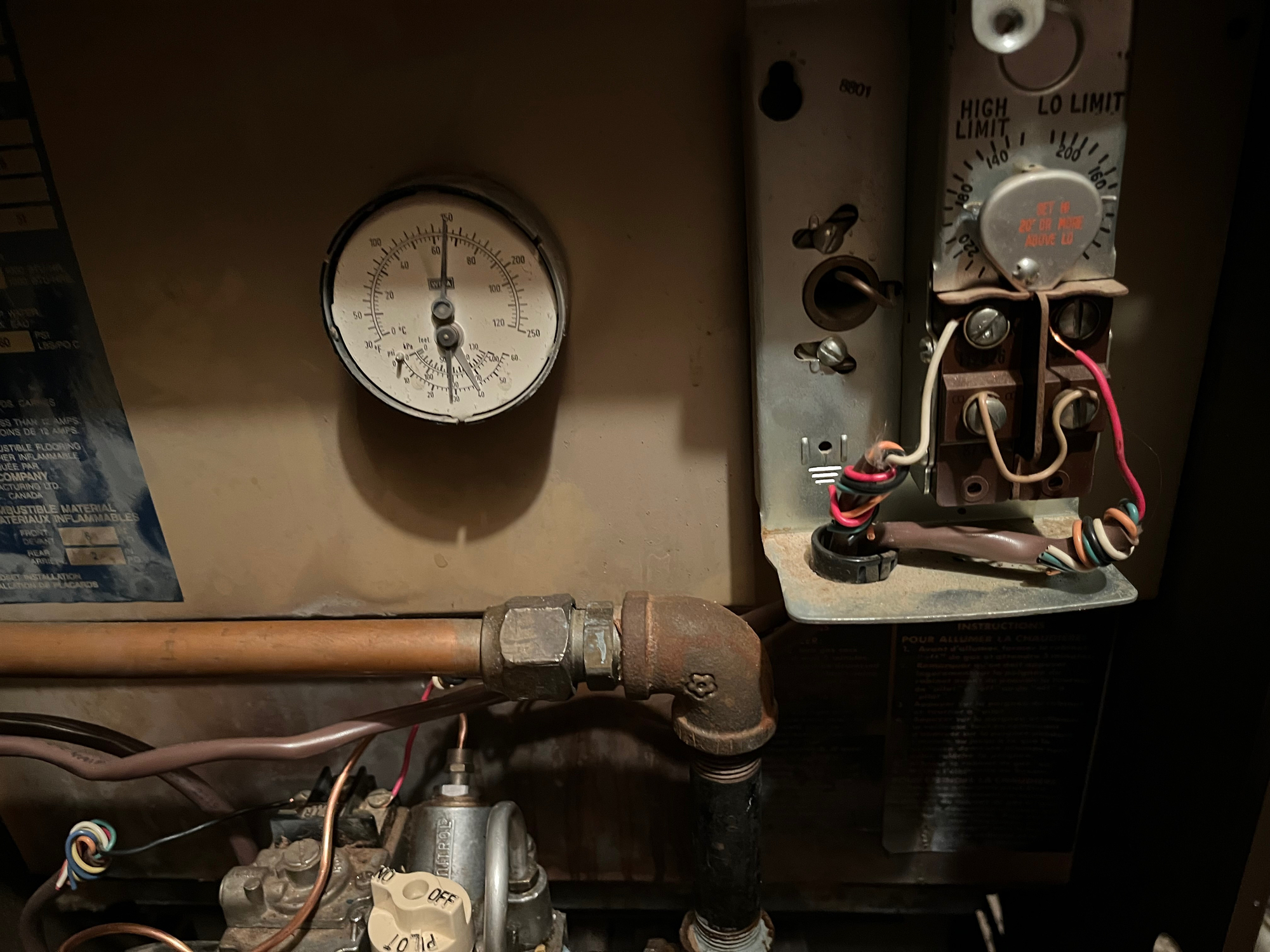 "Other" pressure indicator after it has been running for hours 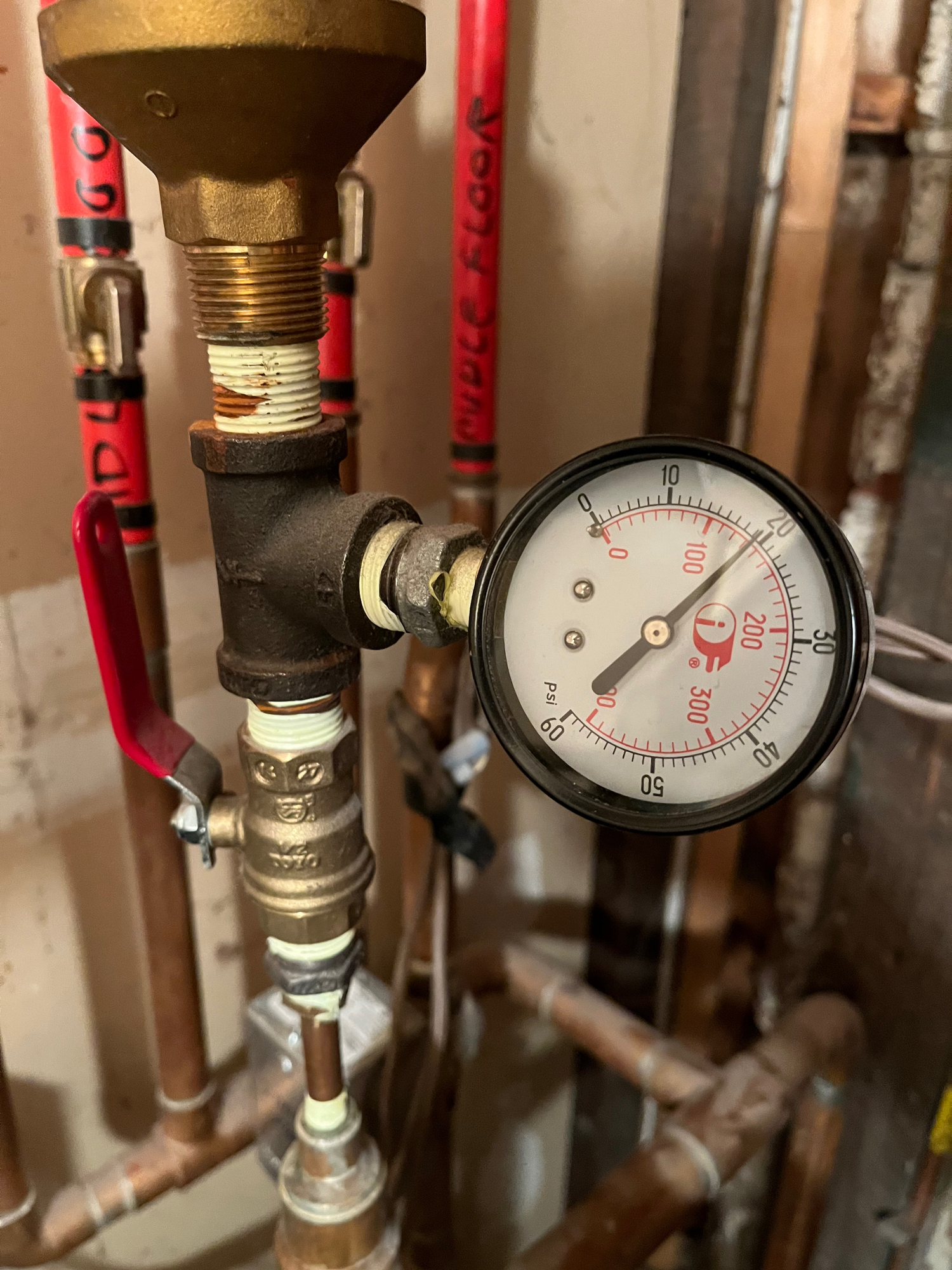 Thank you so much for any insights you might be able to offer!
0