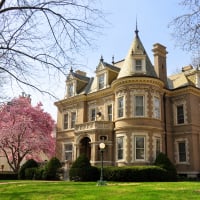 Shahrdad Member Posts: 117
January 2021 in Strictly Steam
My 2 1/2 story masonry house built in 1897 has an original gravity hot water system. The house is probably around 5,500 square feet. My coal burning boiler was updated in the early 70s to a cast iron WM gas boiler with an output of 196,000 BTU/hr. Even during sub-zero temperatures, the little boiler has kept the house perfectly warm. In such super cold days, the boiler runs for long periods, but still occasionally cycles off. Most of the winter, the radiators are just lukewarm, and even during the polar vortex a couple of years ago, they never became so hot that I couldn't hold on to them comfortably. I doubt they ever even reached 130 degrees.
I spoke with two contractors, and they both thought that I need a boiler with an output of around 240,000 to 260,000 BTU/hr. in order to get a house of this size warm from a cold start.
I haven't done a heat loss calculation, but I did calculate the output of my radiators, which showed a total of 1,414 sq feet of radiation. I even added the 200 feet of uninsulated 3" pipe in the basement and rounded that number upwards to 1,700 sq feet of radiation.
Even if my radiators ever get as hot as 140 degrees, which in 25 years they never have, that would mean 153,000 BTU/hr output from my pipes and radiators. At 150 degrees, that would mean 187,000 BTU/hr of output.
Is there any reason to have a boiler that has an output so much greater than what my radiators need to emit on the coldest days? Or should I just go with the Vitocrossal 300 CU3A with a max input of 199 MBH? Assuming a 95% efficiency, it should produce a maximum of 190,000 BTU/hr.
I see my neighbors with smaller houses than mine getting new boilers way bigger than I have. I don't want to make the same mistake.
0
«12»