Loving our new Energy Kinetics System 2000...and a Question

Mainiac Member Posts: 12
November 2019 in THE MAIN WALL
Our 26 year old Burnham V7 developed a crack three weeks ago. Of course it was on a Friday afternoon so I had to wait over the weekend before I could contact companies for replacement estimates. The company that come over and found the crack gave me a quote for another tankless boiler and a Buderus G115 with an indirect tank. The Buderus setup was $2000 more but they highly recommended it over the other one. I was suffering from sticker shock as overall I didn't realize how expensive it would be to replace my boiler.

Over the weekend I talked to two of my brothers. One said to definitely go with the Buderus. The other one mentioned this local company he saw advertising the System 2000 a few years back. I did some research on the System 2000 and was very impressed with it. I actually spent a fair amount of time on this site reading threads about it and comparing it to the Buderus and other boilers. I was especially impressed by seeing the president of Energy Kinetics along with some of their techs responding to threads.

On Monday I started contacting some companies. I started with the one my brother mentioned sold the System 2000. I called constantly for hours only to be greeted with voicemail no matter which option I chose from the menu. I finally just left a message which was never returned. I called Energy Kinetics to get some other local dealer names. After a brief message saying the call may be recorded for training purposes I was immediately talking to someone. I got some dealer names and started calling. That's when I found out it wasn't a good time to be looking for a new boiler. Most companies were installing out to early/mid December and would take a week or more just to get someone to come out for an estimate. I was finally able to find a dealer who could come out on the Wednesday. I also got one other company to come out on Wednesday but they didn't offer the EK systems. The non EK company came in at $4000 higher than the original quote for the same Buderus system. The company that did EK systems quoted a Buderus at $500 less than the original quote. The System 2000 was only $200 more than their Buderus quote. I was quite happy with that so I signed a contract with them.

I was still a little nervous as a lot of the stuff I read on here said to be sure you research the installer as that is the most important part of any new heating system purchase. I really didn't have much choice but I did feel comfortable with the Energy Adviser who gave me gave me the System 2000 quote. The installation date was set for this past Tuesday and Wednesday. Tuesday the installer showed up and started prep work. Movers came with the System 2000 boiler and water tank. He unpacked them and did more prep work and was here for around three hours. He was great and definitely put my mind at ease. He came back Wednesday morning and installed the whole thing by himself. I was amazed he did it all alone. It looked fantastic and after all was tested to be working properly he left after a total of eight hours.

We love our new System 2000. It is so quiet compared to our old boiler. Unless it is totally quiet in the house we don't even know it's running and even then only if you are over it's location in the basement. The Energy Manager is awesome. I love being able to see exactly what the boiler is doing. The energy recover is great too.

I do have one question. When we finished testing each zone twice to make sure all was working well there was this sloshing sound coming from the boiler. You can only hear it when the burner isn't running. The installation guy said it's air in the system and it should work it self out after a while. He did put on an air bleeder valve that I could hear releasing air when the system first started up. It's only been a couple days and the sound is still present. It doesn't appear to be causing any issues as the system seems to be working fine. How long should I give it for the sloshing sound to go away? 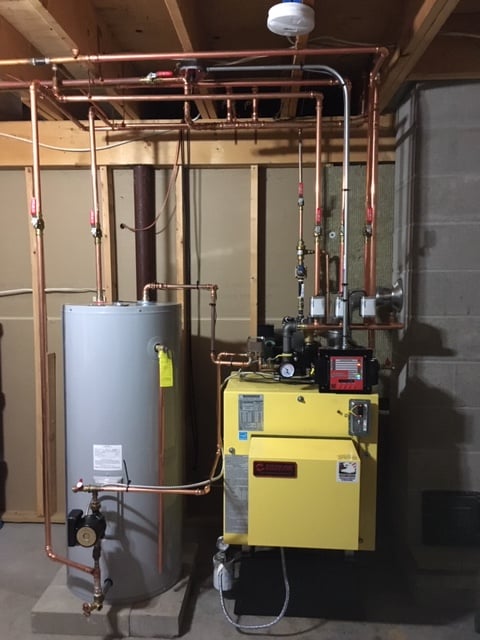