The Wall
Home › Oil Heating
Click here to Find a Contractor in your area.
Welcome! Here are the website rules, as well as some tips for using this forum.

Tom55 Posts: 4Member
September 2019 in Oil Heating
Hi. I'm new to this forum. I've read some posts on this topic but was hoping to get some advice considering the unique topology of my hot water heating network. I'm going to put in an interior (French) Drain (FD) in my basement and will need to remove the baseboard radiators to do the job right. I'd like to solder caps to the feeds to the basement radiators while doing the FD job and so have to get all the water out of them. The house is old and so each of the three heating zones were plumbed differently. There are no zone valves for any of the three zones and and only one of the zones (C) has a manual shut off valve. Flow Control valves are used on all three zones. I've attached a schematic of this plumbing circuit to talk to the details of this setup for me. I'll also add additional info on those Flow Control valves at the end of this problem description.

I'm expecting that I will add manual Shut Off Valves (SOV) to the feed and return side of the basement heating zone
( Zone B ) which I'm looking to disconnect.

So I have three areas of concern that I was hoping to get some advice on:
1) Draining the system enough to allow extracting those radiators from Zone B while also putting in those SOV's.
After turning off the boiler and letting it cool down, I expect to open the SOV_SYS valve. After that I'm a little unsure.
Zone C SOV's will be open. I expect I'd open the FC valves if thats possible. Would I want to close the Expansion tank
SOV?
2) If the system is drained I'll solder in the shut off valves for the source and return sides of Zone B (SOV_B_1 and
SOV_B_2). Any advice on how to make sure these copper lines are dry enough to solder in some new components?
Enabling soldering of caps on the Zone B radiator feeds is a similar concern.
3) Lastly, once I get radiators of Zone B disconnected, and new SOV's in place I'll have to bring the whole system up
and bleed it. I've read a few descriptions of how to do this, but in all cases folks were working with SOV's and Drain
Valves (DV) on all zones. Zone A in my configuration has neither and I can't add them in because that path uses
large steel pipes rather than small copper tubing. I can bleed Zones B & C since at this point both will have Shutoff
and Drain valves. While I'm doing this Zone A will be open though. Also, the radiators for Zone A aren't baseboard
and have bleeder valves so once everything is up and running I can use those to focus on bleeding that zone. Still,
I'm not sure of what my strategy should be here and would appreciate any advice.

And here is the schematic and some pictures of the system. 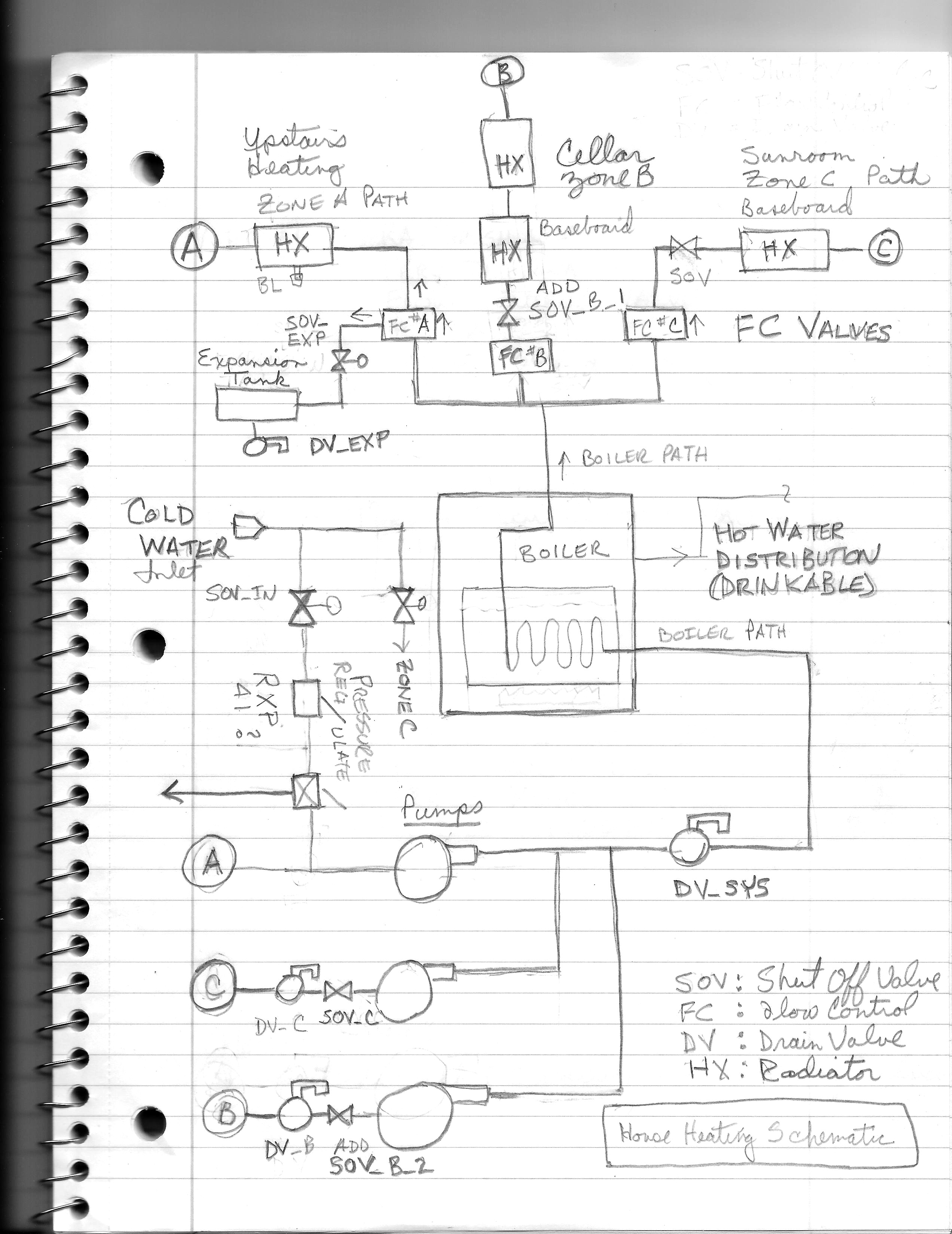 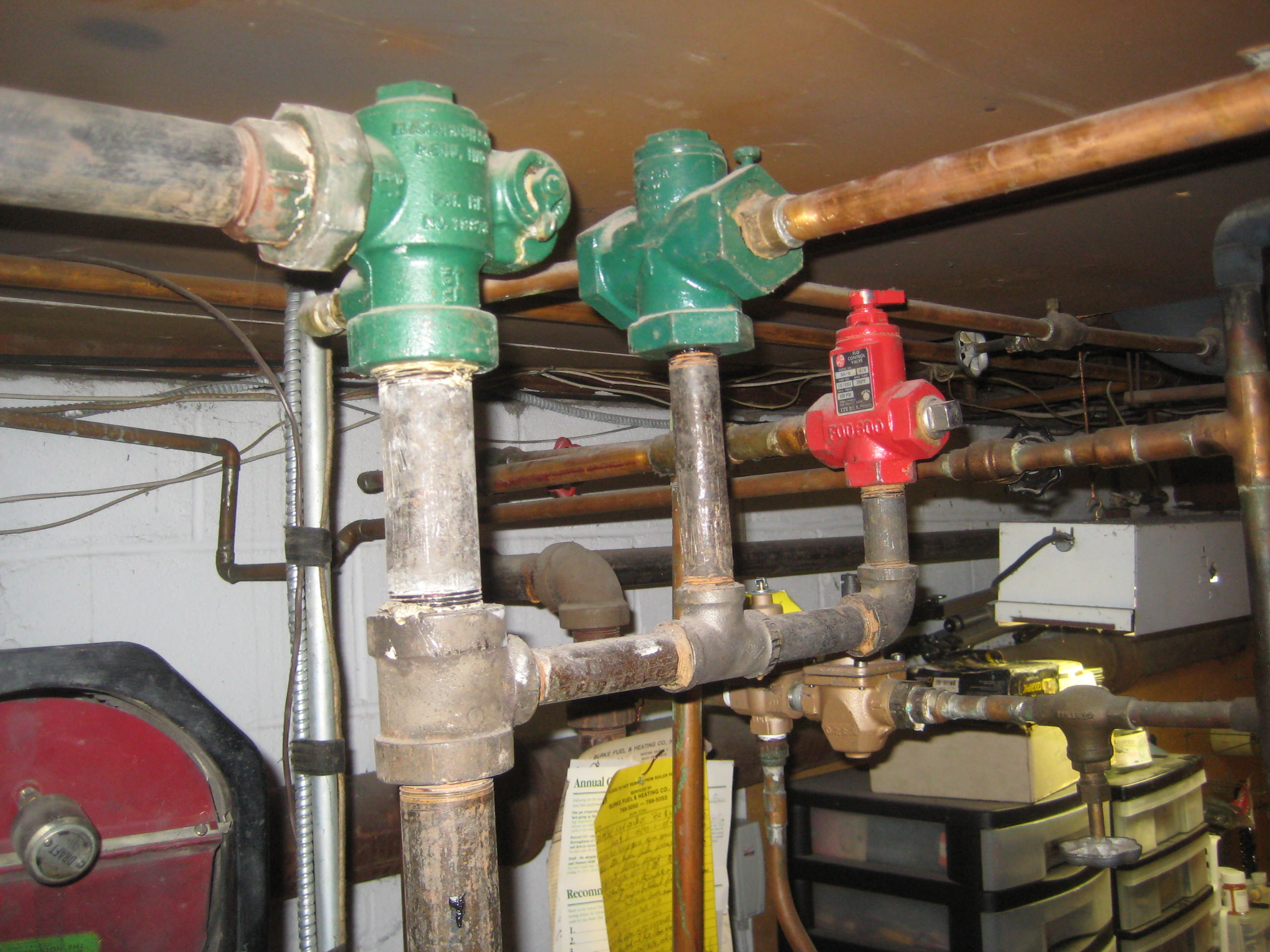 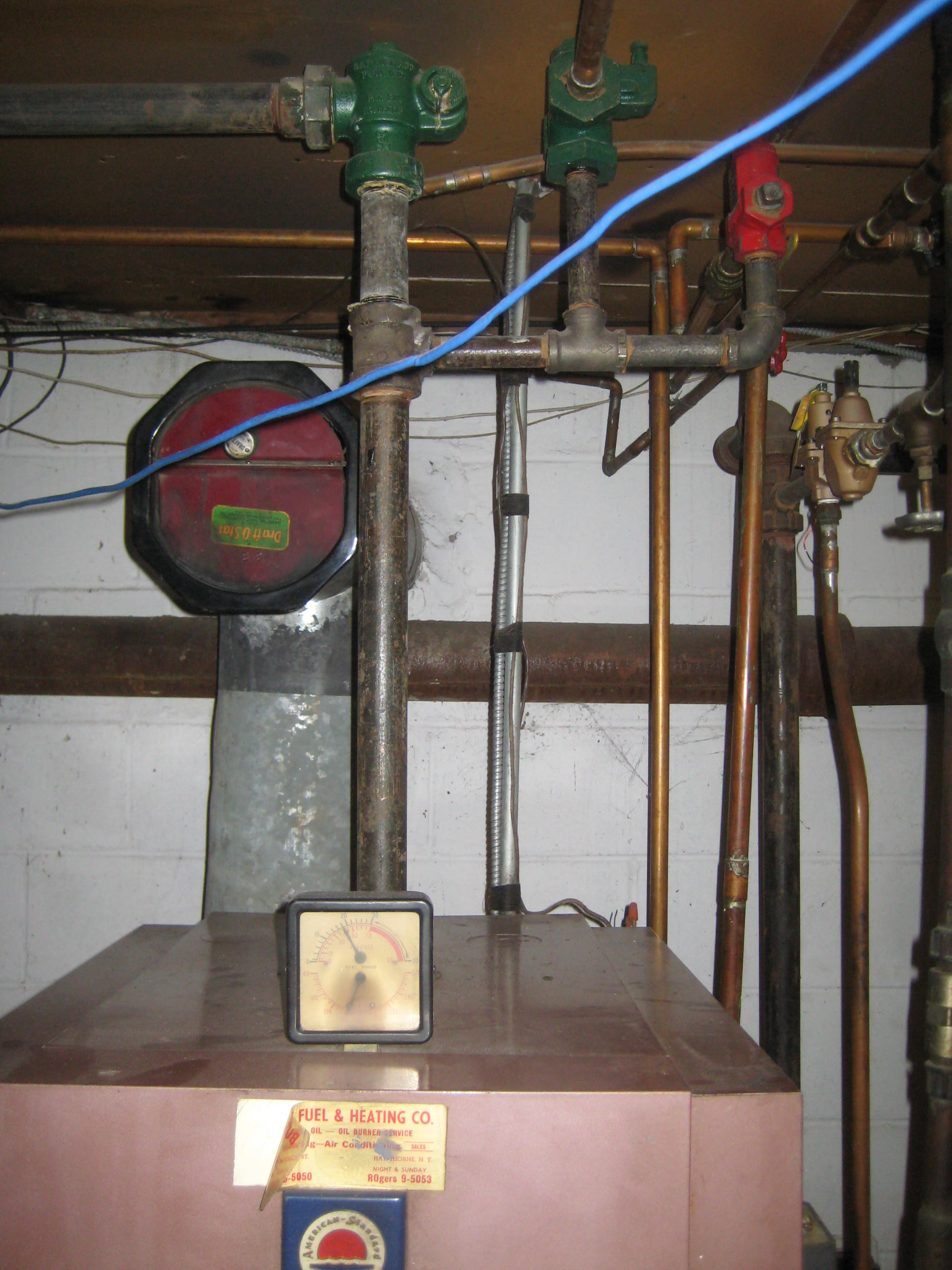 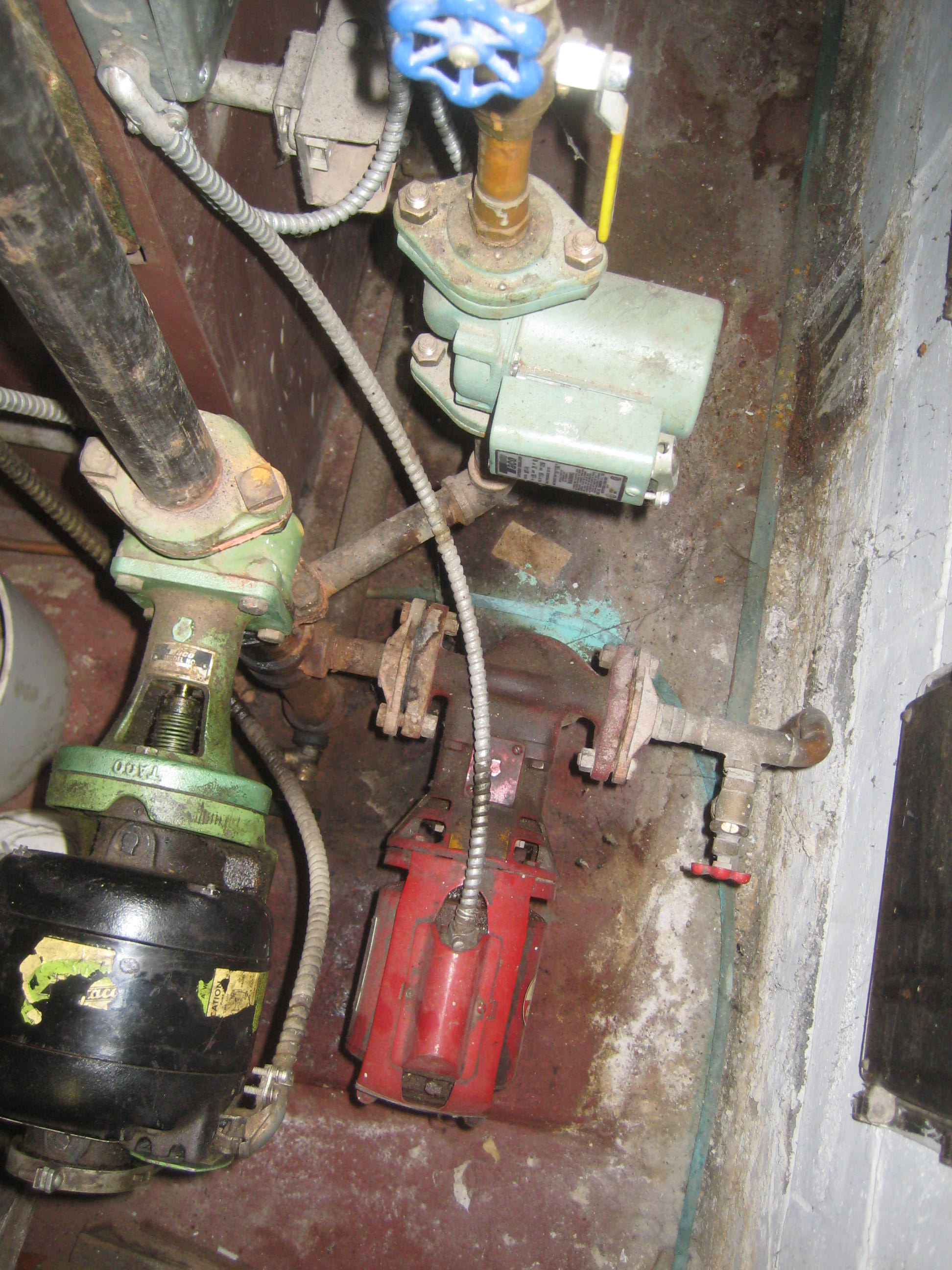 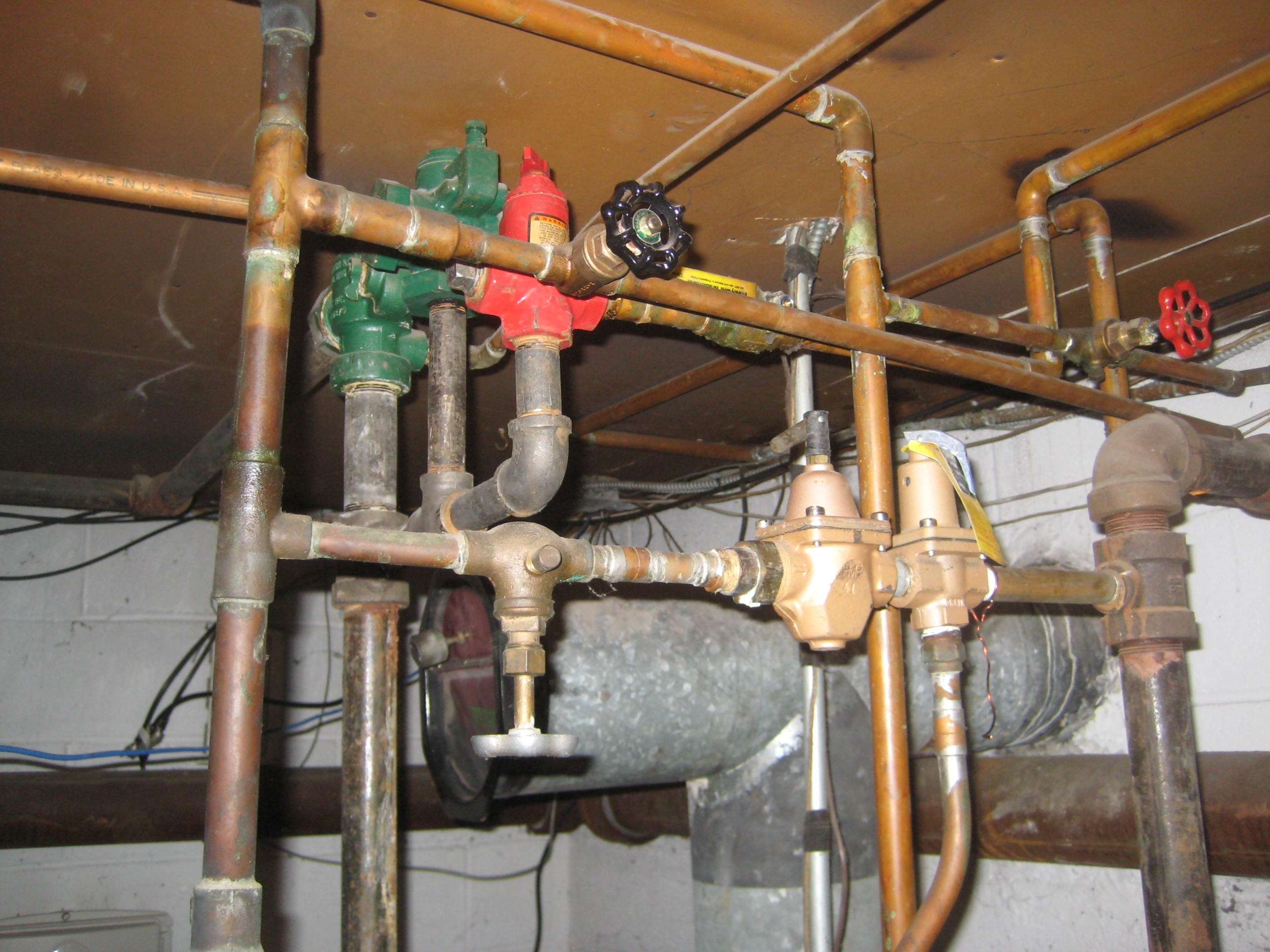 Thanks for any advice. - Tom