Steamhead Member Posts: 14,470
December 2018 in Oil Heating
We've been working at this church for a bit. They have two steam boilers- one brand-new Weil-McLain 80 and this Smith 28A- 8 with Beckett CF2300A- the old style with the damper linkage. Earlier this year I gave the Smith a good cleaning that it hadn't had in years, replaced all the cleanout plate assemblies as they were in bad shape, and did my best to get the burner in tune. Unfortunately the head adjusting plate was broken and the bulkhead fitting had been replaced with the wrong parts, causing the head to sit cockeyed. So I did my best, producing the top set of test results, then ordered the parts I needed. At least we were at zero smoke.

This past week the fuel unit died. I found out that whoever was there before had used the wrong spin-on filter. The Gar-Ber R is only rated at 10 GPH throughput, and the fuel unit's TGSC is 30 GPH on a 2-line system like this. So I moved the spin-on from the tank location to the burner and put on an M filter, good for 32 GPH. There was an existing FB-6 at the burner and that is now at the tanks. It's not uncommon for these tanks to run out, so 2-stage filtration is a good idea here.

I also found that whoever put on the fuel unit that had failed had not installed the bypass plug. It's a wonder the thing ran at all.

So, with the oil feed fixed and a new head adjusting plate and bulkhead fitting, we got the much more respectable results on the bottom. There's still much more to do on this system, but I think we're off to a good start. Moral of the story: If you don't test, you not only risk a lawsuit if something goes wrong, but you also can't document how much better it's running! 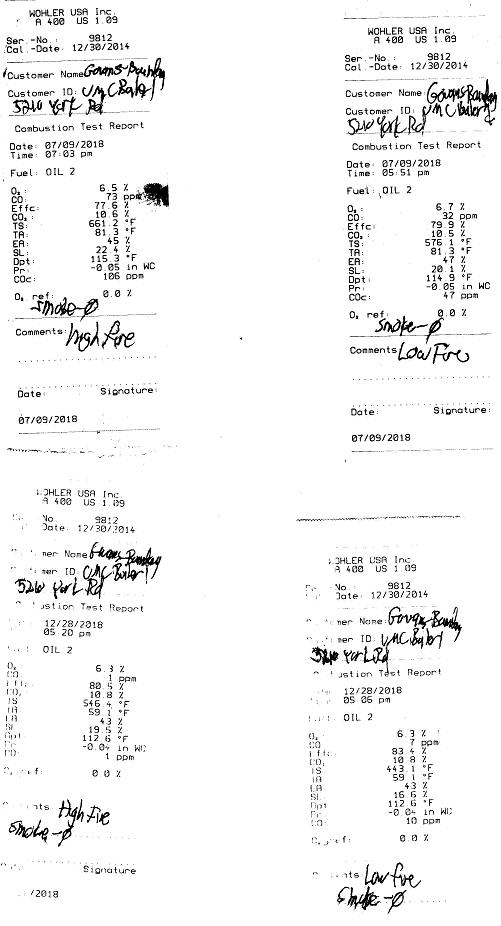