radcos Member Posts: 9
October 2018 edited October 2018 in Radiant Heating
Hi - I had a contractor come out to convert my hydronic piping near the boiler to a “true” primary/secondary system using closely spaced tees for hot and return water to/from the secondaries. I have a 200K BTU non-condensing cast-iron boiler with a 1.25 inch pipe as the primary loop – the primary circ is a Grundfos 15-58 set on high speed.
I have two secondaries that are also run with 1.25 inch pipe – one supplies 3 zones of tubing embedded in concrete and the other supplies 5 staple-up zones. Motorized three way mixing valves were installed for both. The zones are pumped by Grundfos Alpha2 15-55 circulators set on the middle constant pressure curve.
I am having an issue with flow reversing in one of the mixing valves (for the concrete zone). It appears that when the valve is set to mix a certain amount of hot water in with the returning cold water (more than about 20%) the hot water is flowing out of the valve where the cold water should be entering and flowing back to the primary loop along with returning cold water. I can tell this is happening both because the temperature of the secondary spikes and because the piping into the cold side becomes hot.
When I contacted the contractor he blamed it (without coming out) on the Danfoss valve. (Which I picked out but that’s another story.) I don’t believe anything is wrong with the brand new valve and I’ve triple checked to see that the valve stem is oriented correctly. What I see that may be the issue is that he did not make any allowance for a run of straight pipe after the closely-spaced tee for the zone that has an issue. The piping prior to the tees may also be a problem.
About 2” prior to the first closely spaced tee there is an air separator and expansion tank mounted in a long run of straight pipe that begins at a 45 elbow near the boiler. After the second closely spaced tee there is a 90 turn with 1” of straight pipe before the elbow turns (so about 1” of pipe is exposed between the tee and the elbow fittings). 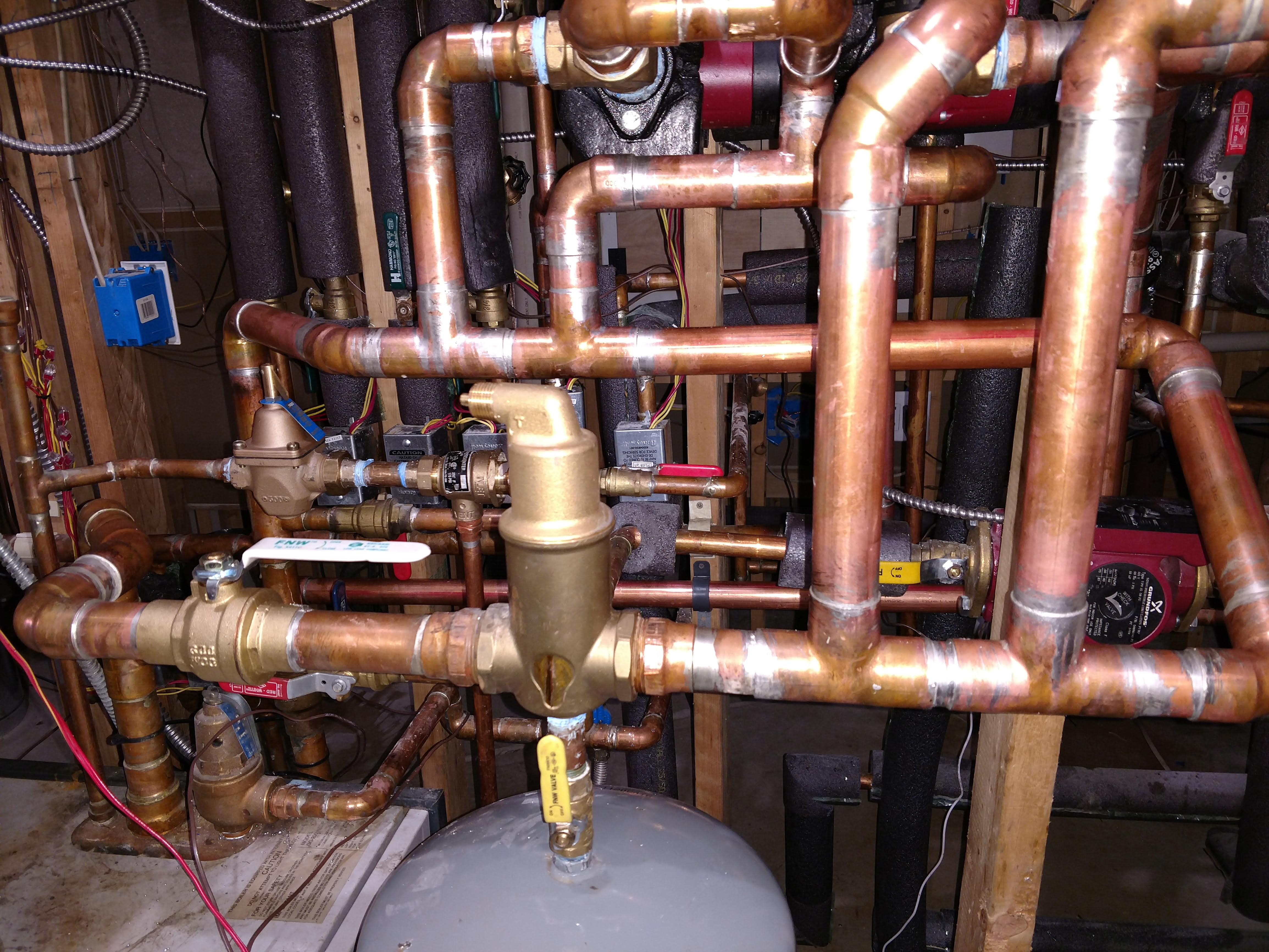 My questions are: Is there anything else to look at as a cause other than the lack of proper amounts of straight pipe prior to and after the tees? This would be 8 diameters (10”) prior to the first tee and 4 diameters (5”) of straight pipe after the second tee. (Got this from the Siegenthaler book.) Is there any chance that only installing the 5” of straight after the second tee will resolve the issue or will I also have to move the expansion tank/air separator that is teed-in towards the end of the long (>10”) run of straight pipe prior to the first tee?
I’ve tried altering the speeds on the primary and secondary circulator as a work-around. That didn’t work. Keeping the valve positioned to admit little hot water to the secondary (less than about 20%) seems to work but I don’t want to leave it there permanently.
The contractor was irritated with the job in the first place because he didn’t take care to install one of the valves in the correct orientation and now he’s unhappy that I am suggesting that it is his piping at fault (and actually says that it doesn’t make any sense) so looking for some advice.