D107 Member Posts: 1,800
October 2018 edited October 2018 in Oil Heating
Buderus G115-3, Riello 40F3, Logamatic 2107 with indoor sensor and indirect hwh. I was at family house yesterday--very humid day, AC on, I feel radiators are hot. Outside temp on Logamatic registers 75, Warm-Weather-Shutdown set at 65. System with indoor sensor set at constant circulation, but as far as I know constant circulation should not be on with the WWSD symbol on. Yet zone circ was hot and a few rads were hot.

I did see on the indoor sensor that it was somehow set to 'daytime' rather than auto but that should not have caused the boiler to put out heat. I wondered if this was perhaps a migration of heat from the DHW--we had been using some HW and so when I heard the boiler go on three times during the day I thought that was the reason. Then I recalled that Zone 1 was placed first in the supply piping, followed by the HW, then zone 2, so I'm thinking could this be ghost flow? Note that five minutes after I set indoor sensor to auto circulator stopped--not sure if it won't start again or if that setting had anything to do with it.

But that wouldn't answer the question as to why circulator was on at 75º outside temperature. See attached photo. Zone 1 is a split loop; most supply flows right except for the big living room rad (flows left) on the other part of the loop. Zone 1 circ is farthest right, then going left, 'HW', then Zone2. I have never noticed this before--possibly since I don't live there and might have missed it. Or else the home inspection engineer for the buyers changed some setting when he turned on the boiler in my absence while inspecting. 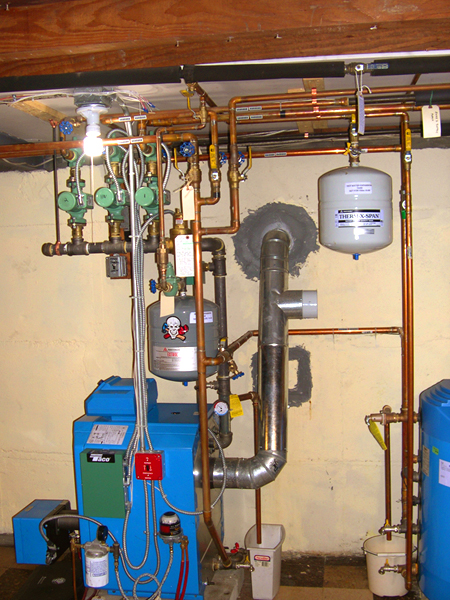