Steamback Member Posts: 35
August 2017 edited August 2017 in THE MAIN WALL
I'm a solar thermal contractor who has put solar thermal with a 120 gallon storage tank in a small super-insulated barn (new construction) with existing radiant heat in a concrete slab on the first floor (it's 2 levels).

The building has an existing Navien on-demand unit supplying the heat to the radiant floor loop via a simple round Honeywell thermostat through an Argos AR-822 II relay board with built-in transformer applied to R and W thermostat connections. (FYI - In the attached PICTURE I'm planning on cutting off the transformer on the Argos since I have an external transformer).

I tied-in to the radiant loop interfacing our solar tank with an external flat plate heat exchanger using 2 extra pumps (I'll call them solar heating pumps, you'll see them on the diagram I attached) which will heat the building if the solar tank is hotter than a pre-determined temperature, say 120. Because I do Steamback solar with SunEarth TRB-32 blue sputter plates, the solar tank is almost always hotter than that temp if the sun has been out at all.

I was asked by the guy who installed the Navien unit to set up something where both our solar heating loop and his navien heating loop could not run at the same time. The attached picture was the best I could come up with. I intercepted the in-place thermostat wire to the Argos board, redirected it to my own transformer 24V circuit which activated both solar and navien at same time, and left the Johnson Controls A28AA-37C 2-stage control to determine which loop would be active...either the solar or the navien.

To watch this system over the coming Fall and Winter I am placing an internet-connected temperature monitor on it so I can record multiple individual temperatures and datalog them. Its my own design, an Electric Imp wi-fi microcontroller connected to a hotspot so I can watch the system on my phone. I plan to watch solar tank temp, solar return temp, solar supply temp, solar heating loop, navien heating loop, house temp, etc...

I guess my question is this: what would be the best way to have 2 heating systems heat a building with just one simple contact-closure thermostat call? Is the PIC I attached a good idea for the building I described, or a bad one?

I'm most concerned about the fact that the Johnson Controls aquastat has a 5 degree differential on each stage and a minimum 2 degree differential between stages. So basically, in a super-insulated house with radiant concrete floor, does it matter if sometimes the Johnson Controls unit locks out both solar and navien for a period of time, which is determined by how long the insulated solar storage tank takes to cool/warm up. You know, that dead zone between heat/cool stages.

If you understood this all, do you have better ideas? Is the simultaneous use of 2 heating systems based on the temp of a water tank the wrong direction, or is there a better direction to go? 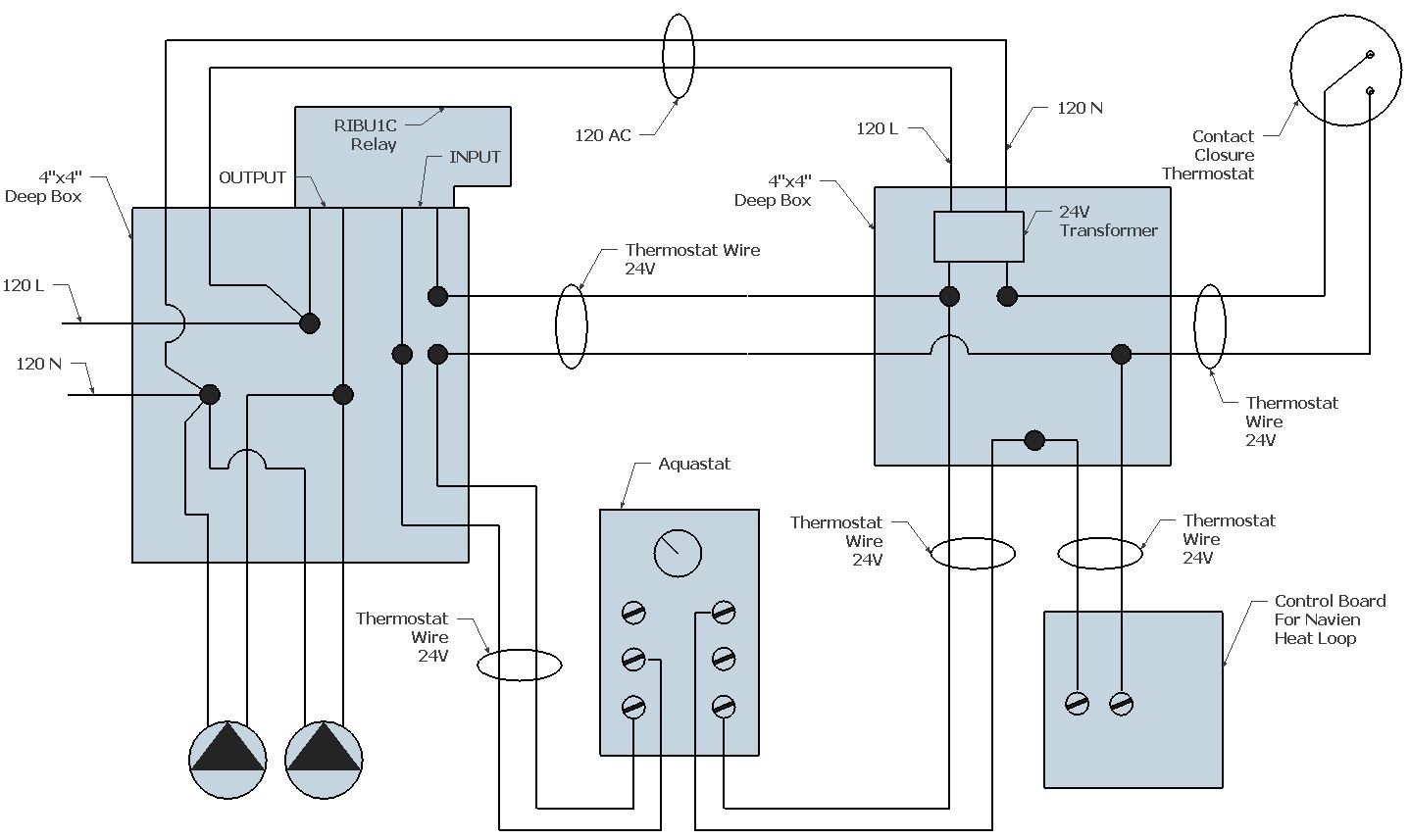