zavnet Member Posts: 15
July 2015 in Radiant Heating
I’m a homeowner who has been following many of the conversations and advises on this site. I truly appreciate the effort, knowledge and dedication many of you consistently provide.

Background:
Last winter burned appx 600 gallons each month (from Nov thru Mar). It been the highest propane usage to date.

The house was built in 2007. An internet based company (no longer in business) did the design, tube layout plans and provided all the parts for the radiant setup including the Polaris 199 BTU water heater (closed system) for the radiant and the DHW.

The tubes are Mr. PEX, and so were the original manifolds (w/o flow adjustment) – which I changed last year to Caleffi including complete re-piping, new HE and pumps (see below and attached pictures). Also added uponor joist trak heat transfer plates under the first floor. 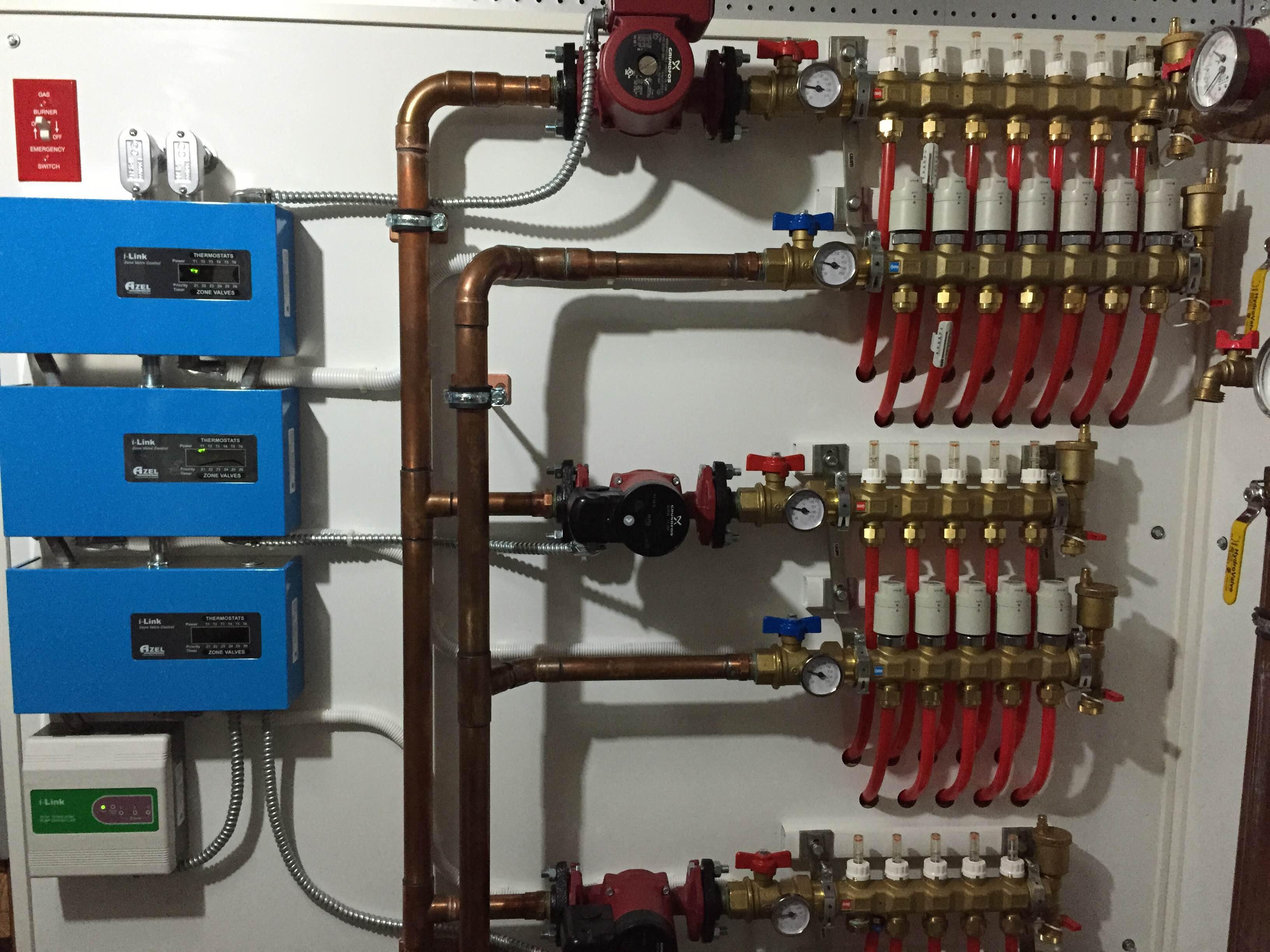 Since making manifolds upgrades etc., last summer -- I didn’t have to use the electric plates for the first time during the last winter (at last…)

After following many heat loss conversations on this site I did crunched the numbers using Slant/Fin and got ~ 167 BTU/HR – does that seem high/reasonable given the SF?

The house is well insulated -- entire envelop sprayed with open cell (beyond code requirements). My electric bill for cooling (Two-stage HVAC units 5 & 3.5 tons ea @ 21 SEER) is 13 cents on a dollar compared to the heating bill…

Garage is not being currently heated. I have the two loops disconnected. Ultimately would like to keep it at 50 degrees so I can work in the workshop during the winter...
Basement is unfinished, the only insulation is reflective bubble foil under the tubes. I keep it at 65 degrees during the winter.

Known Issues:
• Most of the loops are 400+ in length – so no easy way out of this one… this was by design. I personally didn’t know better at the time…
• The tubes under 2nd floor don’t have heat transfer plates (was told not to bother by the company that designed the system… they are stapled + reflective foil). This is also where I have notice the smallest delta T – the heat is effectively not getting off/transferring well.
• I’m on my 3rd Polaris (the manufacture has been replacing them), typical run starting with the first one was 3-years or less. The first two developed small crack in the tank, leaked water and ignitor kept breaking. I also can’t seem to get rid of the smell when the unit is running – which seems like some level of exhaust issue. Checked for leaks multiple times, the gas leak detector is installed (never goes off…). My propane company looked at the this issue as well as the plumber -- neither was able solve it. The exhaust/air intake pipes were ran according to the mfg specs. I recall shortly after getting units installed the smell situation was virtually non existent. After a year or so the smell becomes noticeable.
• During the heating season Polaris cycling is very high, especially if multiple floors are calling. Through home automation tools at my disposal (around early March last winter) I created a program that gets it to 140 degrees, lets it go down to 120 and then starts it again – not sure though if that made a difference in the end.

Decision Points:
After spending many hours on this site I was convinced my Polaris was oversized causing short cycling. Looking at the heat loss calculation 167BTU/HR and Polaris at 199BTUs maybe not, at least on the surface?

I have no love lost with the Polaris unit (to put it mildly) and was thinking of switching to a mod/con as a preemptive action with the upcoming winter. Have been considering TT PT250 with Smart 60 or 80 for DHW or Lochinvar WHN199.

Was also planning to put mixing valves in front of each manifold to better control water temp for hardwood floor areas vs. concrete slab.