riguy Member Posts: 19
December 2014 in THE MAIN WALL
I just had a range hood installed, our kitchen had no vent previously. Venting straight up through the roof (no second story over the kitchen).

Due to a mistake on my contractor's part, the duct is installed but the square 'chimney' sheet metal cover around it is not. We have to order a new one, which will take a few weeks from the mfg. What exactly went wrong with the contractor is a long story with cuss words, so I will skip it.

The 7" duct goes into a soffit, then up to the roof. The contractor cut about a 10" square hole in the soffit bottom (drywall). Clearly, there is a lot of space around the duct, partly because a transition piece from the hood to the duct does intrude into the space. Photo attached.

There is a lot of cold air pouring down through that gap. I'm not sure if the soffit was always exposed to cold air, but it clearly is now.

Eventually, there will be a 12x12" square sheet metal cover in place between the hood top and the soffit bottom. But it ocurred to me that the cover isn't likely to be air tight, plus sheet metal isn't a great insulator in any case. I wondered if we can do something to reduce the cold air infiltration into that chimney box, or at least do something temporarily while we're waiting for the duct cover.

Can we do something like stuff fiberglass batting into the space between the duct and the drywall around it? For the long term? At least for a few weeks? Assume that we have no access into the soffit or roof area, just getting at it from below through the existing opening.

And just out of curiosity, what would have been the right way for the contractor to handle this? If the answer is this is normal, the chimney would normally be full of cold air, that's fine, but if there's yet another reason I should be unhappy with the guy, I might as well add that to the list...

Thanks and happy New YEar! 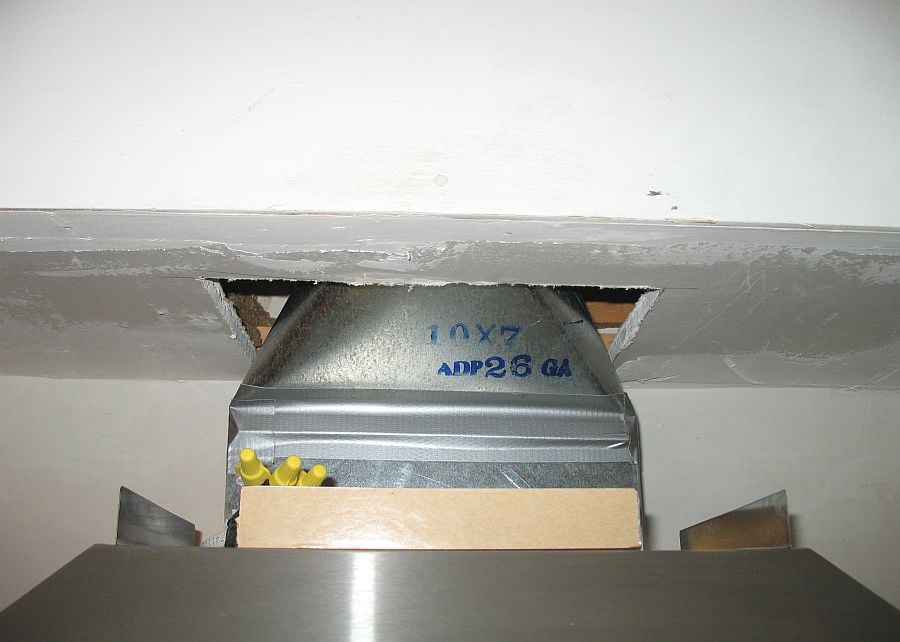